It’s the holiday season, albeit a weird one.

Hotels, we’re happy to say, have kept up their end of the holiday bargain, adorning their lobbies, festooning their walls and lighting up their buildings inside and out. Unfortunately, there are fewer hotel halls — and walls and bannisters and lobbies — to deck this season. Among the super-decorators missing-in-action for Holidays 2020 are The Plaza, Four Seasons New York, St. Regis New York, Loews Regency and Dream Downtown, all closed temporarily due to Covid-19.

Sadder still is the permanent loss of the Plaza Athénée, Omni Berkshire Place and the Roosevelt, uber-decorators all who have closed permanently.

Those hotels that have remained open seem determined to bring cheer to all who walk by or enter. Camera in hand, we set out to photograph the merriest, cheeriest decorations we could find. And yes, we discovered some beauties. 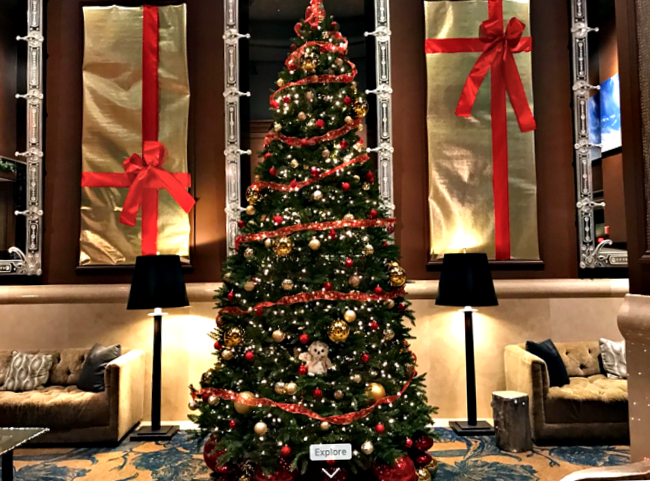 It’s a wrap at The Benjamin, a classic Midtown East hotel that’s comfortable is its stylish 1920s Emery Roth brick tower. The lobby was quiet but eye-catching when we visited. 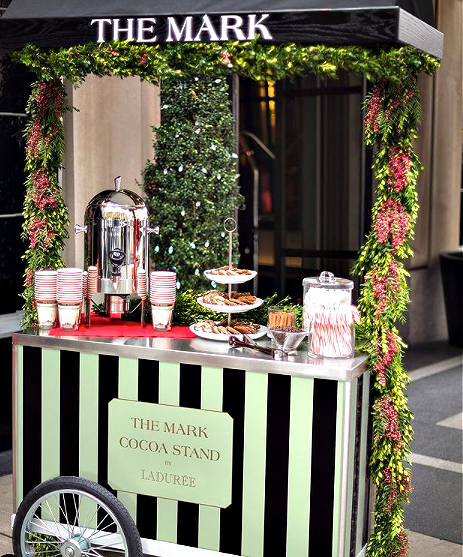 The Mark has served up clever amenities during the pandemic like cappuccino with a #WearaMask message in the froth. Which brings us to the holidays and the be-garlanded Mark Cocoa Stand parked in front, stocked with hot chocolate and Laudrée macarons. 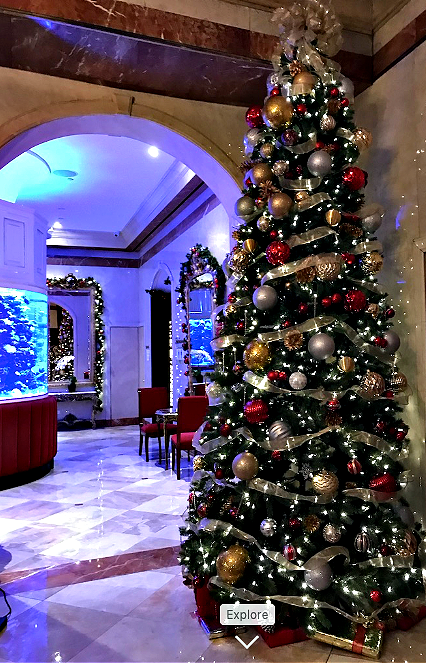 The Kimberly closed on December 13 in response to New York’s recent Covid spike, but their eye-catching decorations were still on view when we stopped by. This proudly traditional Midtown East hotel plans to reopen in March. 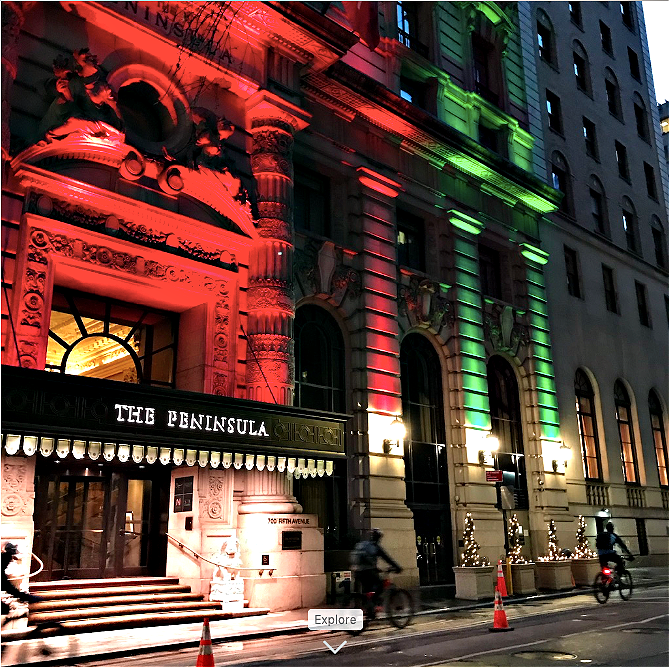 In normal times, the exterior of the Peninsula New York would a feast of holiday trees, tiny white lights and larger than life size sculptures of smiling reindeer (the decorations inside would be pretty spectacular, too). But while the hotel is closed for now, the colorful lights blazing across the Beaux Arts building spread cheer in a rough year. 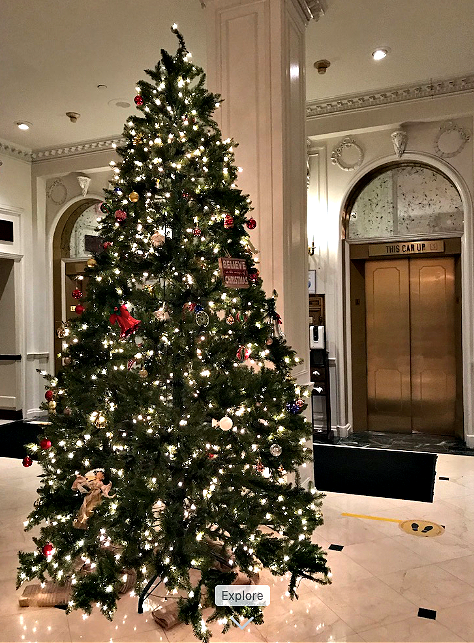 For Mank fans, here’s the tree at the Warwick New York, the midtown brick tower built in 1926 by newspaper tycoon William Randolph Hearst as an apartment hotel for his paramour Marion Davies and her showbiz pals (they could see the latest movies at the Ziegfield Theater, another Hearst property, a block away, but not this tree).

The lobby and tree at the Beekman capture the hip-historic vibe of this downtown hotel. The building’s fanciful brick facade was one of Manhattan’s first skyscrapers and was finished in 1873,  the same year as the nearby Brooklyn Bridge. 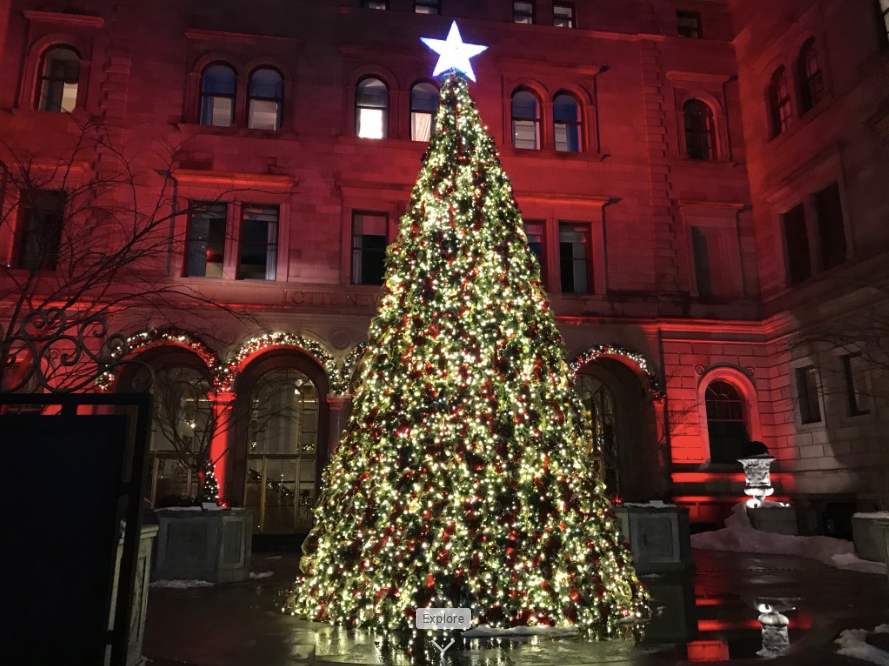 The outdoor tree in the historic courtyard at the Lotte Palace New York is an annual tradition. This year to ensure social distancing, the courtyard is closed, but the tree blazes bright — and the hotel is open.

And if you’re nostalgic for hotel holiday decorations in a normal year, here’s the link to last year’s batch. Here’s to a Happy — and better — 2021!

Eight New York Hotels That Know How to Dress for the Holidays
The Met Museum Returns With New Shows, A Fresh Look And A Friendly Attitude
What AreThe Best New York Hotel Bars for Watching Super Bowl XLVII?
Holiday Decorations that Look Good Enough to Eat at the Waldorf Astoria Beverly Hills
Drinks, Flowers, Games and More — How NYC Hotels Are Toasting the 2019 U.S. Open
Hotel Bars Where You Can Cheer the Super Bowl (and the Giants)
0 replies

The Famous Waldorf Astoria Lobby Clock, Now Marking Time At The New-York Historical... Get Delivery Or Takeout From A Hotel Restaurant During NYC Restaurant Week ...
Scroll to top