If we had choose just one word to describe the 2022 holiday season in New York City, we’d go with normal. And hey, after two years of pandemic craziness, normal sounds downright scintillating.

Lighting the way towards a blissful normalcy are the city’s hotels, dressed to dazzle whether you’re checking in — 6.5 million visitors were expected between Thanksgiving and New Year’s Day — or just checking them out, as we do every year. Camera in hand, we captured 11 deliciously decked halls, walls, and even sidewalks at hotels all over Manhattan — and added the city’s showpiece outdoor tree just because. 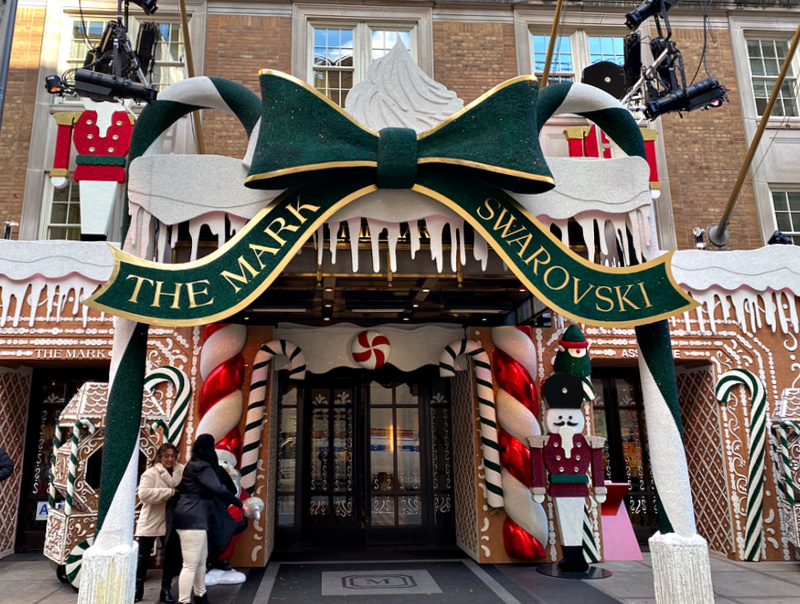 As you scroll down, you’ll see several gingerbread houses on view at the city’s hotels. But none is as big — or glittering — as the gingerbread facade at The Mark, sparkling with thousands of Swarovski crystals. Stop by and warm up with a cup of hot cocoa, available at the gingerbread stand by the entrance, open Monday to Friday from 9 am to 5 pm. 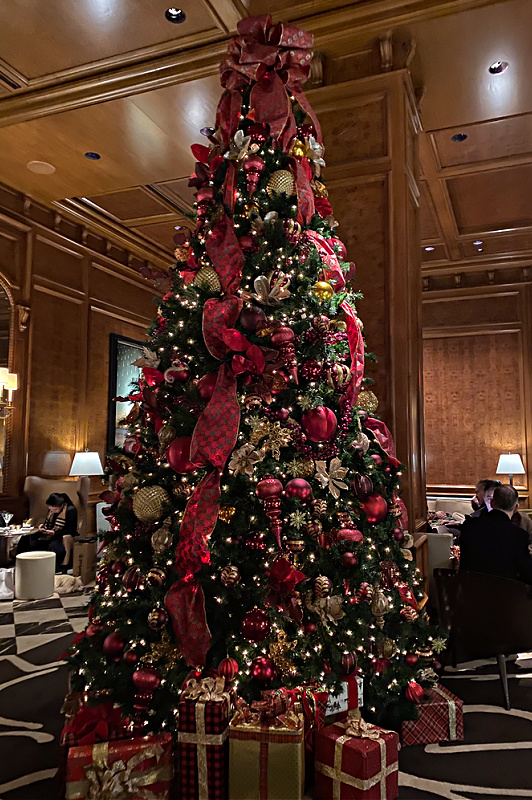 Translating a 44-story hotel into a gingerbread house is no easy feat. So props to the kitchen wizards at JW Marriott Essex House for this lifelike recreation — including the historic hotel’s Art Deco architectural inflections and signature red sign —  that’s showcased in the lobby. It’s a look-but-don’t touch display — apparently, Santa’s watching, if you believe the nearby sign. 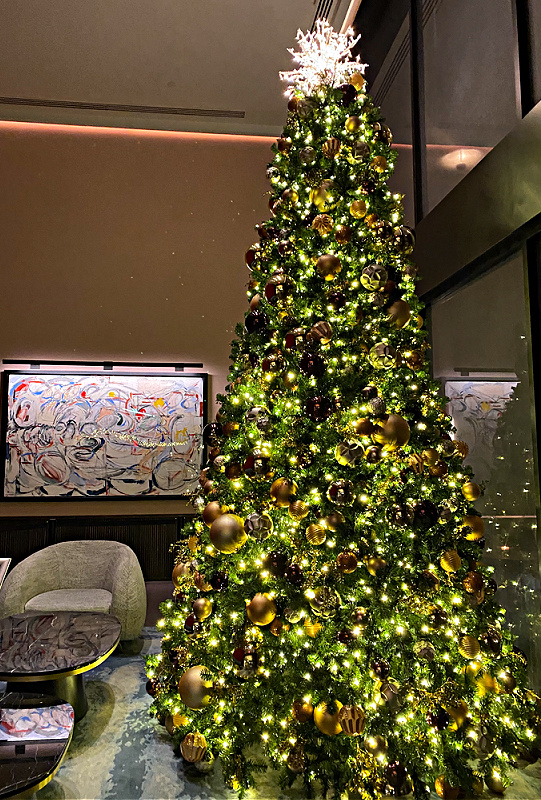 A pandemic positive was the arrival in 2021 of the stylish Thompson Central Park New York hotel, happily billeted in the West 57th Street skyscraper formerly occupied by Le Parker Meridien, which closed in 2020, spoiling for a renovation.  The Thompson more than complied with a hip, midcentury-inflected tower  — and a holiday tree that plays nice with contemporary art surrounding it. 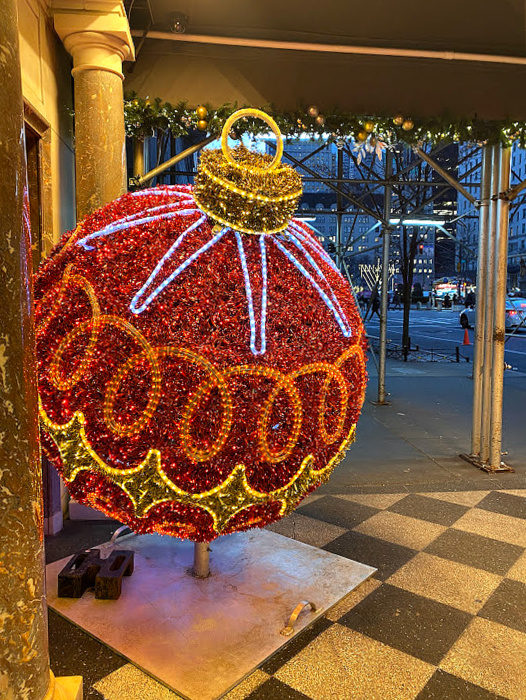 We don’t like to feature the same hotel photos every year. So we were thrilled when we saw The Pierre, a Taj Hotel’s exuberant, planet-sized sidewalk ornament — the ultimate in holiday street art and a favorite of ours from 2021 — reimagined in fireball red, orange and yellow lights (last year’s version sported cool blues and greens). The big, silver-and-gold-inflected tree inside this classic Art Deco hotel is worth a look, too. 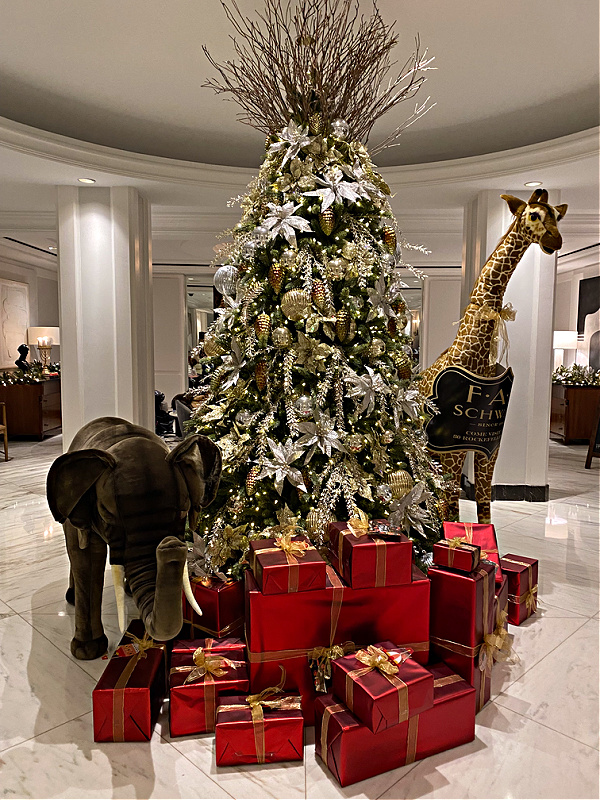 In 2020, during the teeth of the pandemic, the 395-room Omni Berkshire Place became one of New York’s first prominent hotels to close permanently. (We even wrote an obit for it.) But, surprise! The Midtown Omni was back in business by late 2021 (turns out it was cheaper to reopen than to pay city-mandated severance to the unionized staff). Their 2021 holiday tree was modest, but not this year’s beauty, created in conjunction with F.A.O Schwartz, another back-from-the-dead enterprise now ensconced in a Rockefeller Center flagship. 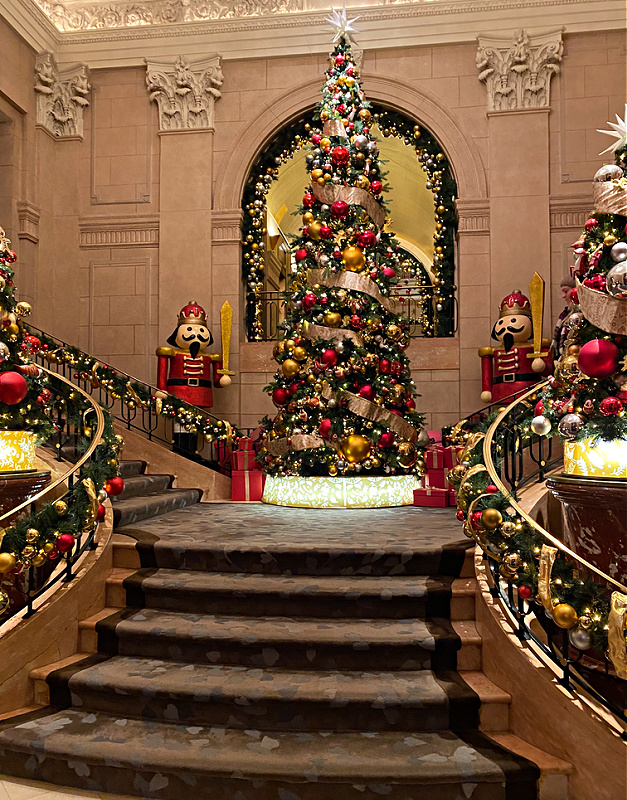 The festive foyer at the Peninsula New York is just a hint of the holiday delights that await at this luxurious Fifth Avenue hotel. (Expect a feast of tiny lights, glass balls, life-size nutcrackers and a walk-in sweet shop, for starters). Be forewarned: you’ll need to muscle past the crowds wielding phones and posing for selfies, especially on the nights when carolers in 19th-century dress harmonize. 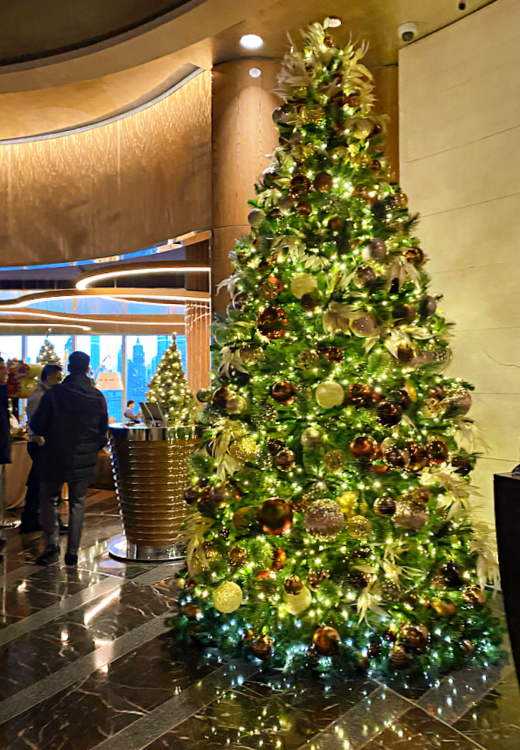 This towering, light-filled lobby tree at the Mandarin Oriental is just an amuse bouche. A  small, brightly lit forest awaits in the adjoining MO Lounge looking down at Central. Park and Broadway from the 35th floor. 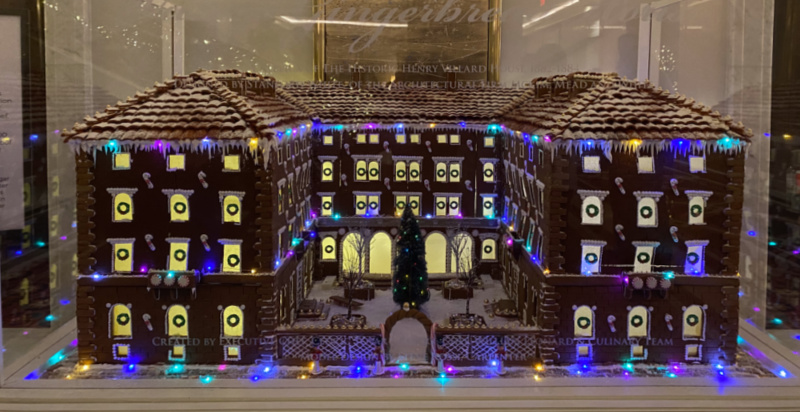 This eye-catching gingerbread rendering of the historic Villard Houses at the Lotte New York Palace is even more delectable when you know the mind-blowing stats behind it: 40 lbs. of flour, 25 lbs. of confection sugar, 16 lbs. of butter, 8 lbs. of brown sugar, 6 jars of molasses, 2 quarts of egg whites, 1.5 lbs. of gelatin, 1 cup of mixed clove, cinnamon & ginger — and over 200 hours to put it all together (the roof features 1,462 individually baked shingles). Bravo! 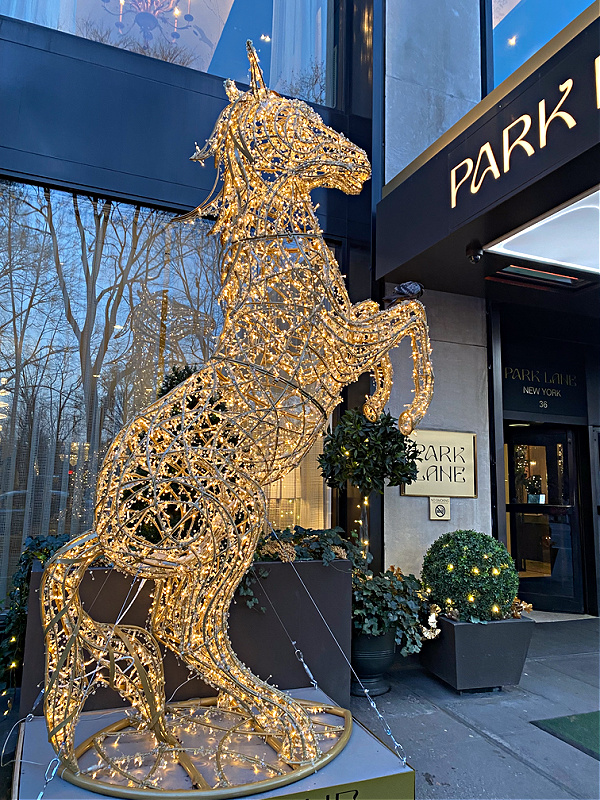 The Park Lane New York is yet another hotel that used the pandemic time-out to renovate. Out went the old, notably all traces of infamous former owner Leona Helmsley, including her lobby portrait. In breezed the new: an inviting lobby bar and traditional but nicely spruced up rooms. Enough, it seems, to make the holiday horse out front jump for joy. 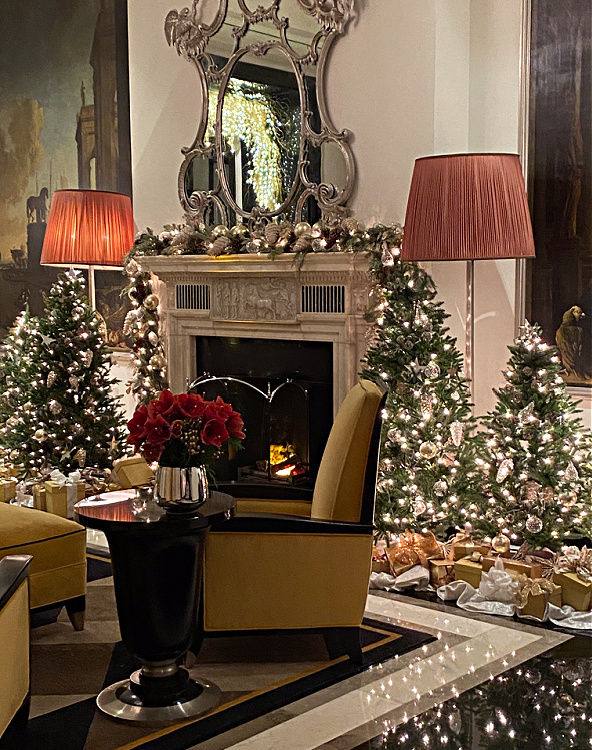 Holiday homeyness, Upper East Side style, awaits in the ground floor sitting room at the The Carlyle. 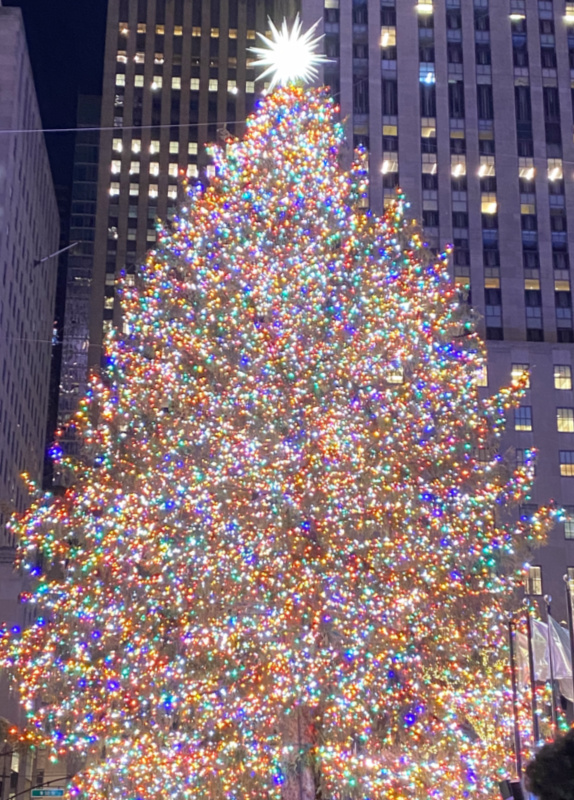 We’ll close with a big finish — the tree at Rockefeller Center. This year’s beauty is a 14-ton, 82-foot Norway Spruce from Queensbury, New York, a town of nearly 28,000 people not  far from Lake George. It’s adorned with 50,000 LED lights (nearly five miles of them) and crowned by a 900-lb. star designed in 2018 by architect Daniel Libeskind. You can see it in person until January 6.

New York Hotels Where You Can Watch the 2014 Winter Olympics in Comfort and Style
A Raid on the Helly Nahmad Gallery at The Carlyle Hotel
Composer and Cabaret Artist Jimmy Roberts Performs at the Keyboard in Afterglow Series
Aged in Wood: The Pierre Hosts a Barrel-Aged Cocktails Festival
The Essex House Gets Rebranded – and Parties with Jon Bon Jovi
Essex House Gets Rebranded (So Long, Jumeirah; Hello, JW Marriott)
0 replies