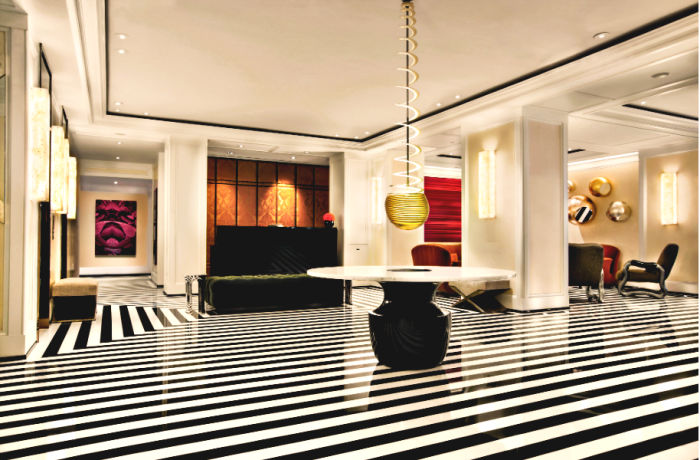 In addition to food prepared by the Vongrichten team, the party featured a flower arranging lesson by white-hot florist Lewis Miller, who counts Chanel, Vogue and the New York Public Library as clients — and who has taught flower arranging classes at The Whitby Hotel. The results, as King disclosed to CBS This Morning viewers, were donated to Repeat Roses, an organization that dispatches gently used flowers from parties and events to hospitals, hospices and homeless shelters. 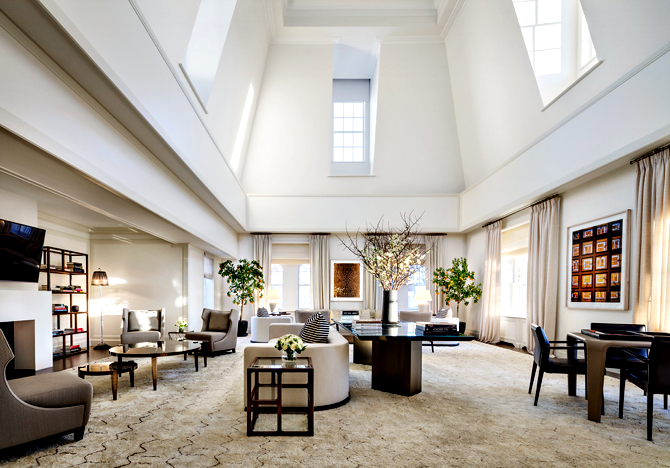 There was more than enough space for flower arranging as well as eating, gifting and celebrating in the penthouse. House is more like it. At 10,000 square feet, the Mark Penthouse is largest hotel penthouse in the U.S.  — and at $75,000 a night, the costliest. Gobbling up two floors of the hotel, it has five bedrooms, four fireplaces, six bathrooms, two powder rooms and two wet bars. The living room boasts a 26-foot ceiling and can be transformed into a ballroom when the need arises. The kitchen is outfitted with an enormous wine cooler and sleek wood floor. It could turn out a banquet. There’s also a conservatory, a library lounge and a 2,500 square foot terrace with a dining area (alas, it snowed the day of the shower). 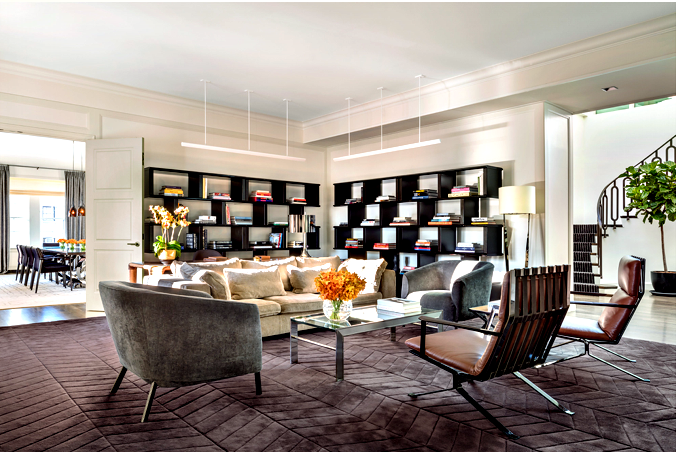 As he did every other inch of the hotel, the talented Grange designed the penthouse. Unveiled in 2015, it’s a feast of creamy white ceilings and walls punctuated by sleek custom furniture and original art that’s photo ready for Architectural Digest, a coffee table design book or Instagram. My favorite detail: the witty zebra-stripe floors you see in the hotel lobby turn up in a penthouse bathroom. 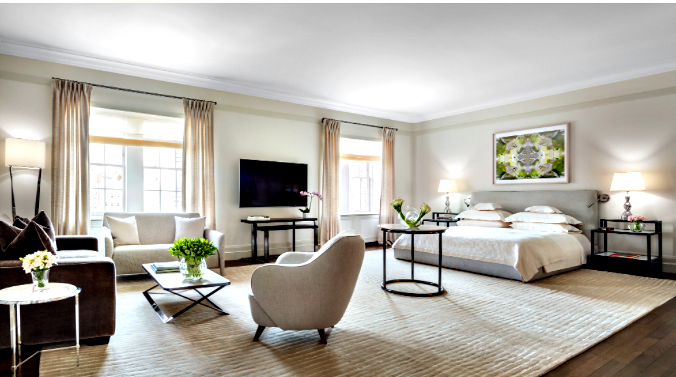 Built in 1927, the Mark started life as an upscale residential hotel in an unassuming brick Renaissance Revival building (the spacious guest rooms included small kitchens). Its fortunes rose and fell over the years, but never tanked given its tony Upper East Side location. A dramatic spruce up in 1989 pointed it upward, as I discovered when I stayed in 1997 (I loved my room’s black and white Deco-esque bathroom). But what you see now is the result of a seismic overhaul that closed the place from 2006 to 2009 and transformed it from a nice, stylish $350-a-night ($250-on-weekends) hotel with a few quirks to a $650-a-night-and-up international luxury lair where Frederic Fekkai occasionally does hair, celebrities check in to get dressed for the Met gala and tennis stars throw baby showers.

Markle didn’t limit her hotel time to the Mark. She lunched with friends at Cafe Boulud at The Surrey Hotel a block away, according to People.

But it appears she did not visit The Carlyle, the nearby Art Deco tower favored a generation ago by Princess Diana — and more recently by William and Kate. Different royal, different vibe, different hotel.

What You — and Will and Kate — Can Expect When New York Base Camp Is The Carlyle Hotel
Was that the Tribeca Grand On View for a Blink in “Blue Jasmine?”
The Happiest, Merriest Holiday Decorations at New York City Hotels, 2019 Edition
Composer and Cabaret Artist Jimmy Roberts Performs at the Keyboard in Afterglow Series
Scones, Sandwiches and Lapsang Souchong: Afternoon Teas Worth Taking at NYC Hotels
The Met Museum Returns With New Shows, A Fresh Look And A Friendly Attitude
2 replies

Seven Stylish NYC Hotel Bars for Watching the 2019 Oscars with Cocktails and... Which New York City Hotels Were Featured in the Green Book?
Scroll to top