On March 1, 2017, the Waldorf Astoria — the fabled “Host to the World” where room service, Eggs Benedict and Waldorf Salad were invented and where every president from Hoover to Obama spent the night — shut its massive doors for a gut renovation that was supposed to take two to three years.

We’re still awaiting the hotel’s reopening — and not holding our breath, because who wants to unveil a billion dollar renovation during a pandemic?

But for Waldorf aficionados starved for a glimpse of Park Avenue’s Art Deco beauty, the New-York Historical Society offers a tantalizing teaser. Standing just past the check-in desk in an arched alcove is the Waldorf Astoria Lobby Clock, the 19th-century tour-de-force feast of walnut, mahogany, marble and copper that greeted hotel guests for over 85 years and was renowned as a popular interior landmark as in “Meet me by the clock.”

It’s hard to think of a more potent piece of New York hotel history. Purchased by John Jacob Astor IV, the fabulously wealthy inventor, science fiction author and real estate mavin who built the Astoria Hotel and died on the Titanic, the clock first stood in the Rose Room of the Waldorf Astoria in its original location on Fifth Avenue and 34th Street. It was moved to the lobby of the current hotel when it opened in 1931.

It’s quite a clock, as you’d expect for a showpiece commissioned by Queen Victoria to wow fair-goers at the 1893 World’s Columbian Exhibition in Chicago, the “Devil in the White City” extravaganza that introduced the Ferris Wheel, among other things. 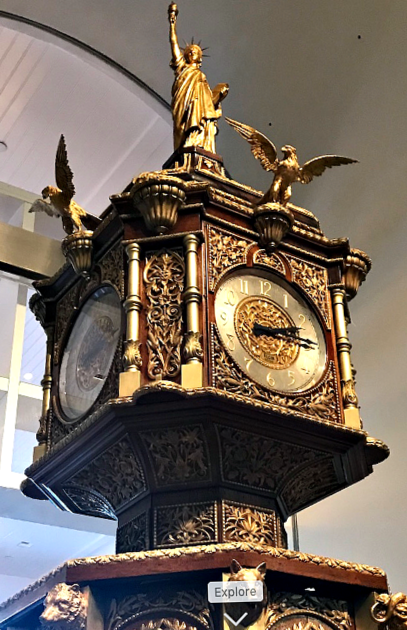 A triumph of high Victorian technology, craftsmanship and more-is-more design. the clock is a nine-foot, two ton, 19th-century ode to the Special Relationship. The base is adorned with panels depicting the Brooklyn Bridge and Scotland’s Firth of Forth Bridge and portrait medallions that showcase Victoria accompanied by a bevy of illustrious American men including George Washington, Benjamin Franklin, Abraham Lincoln and Ulysses S. Grant. In its heyday, the clock chimed the American and English national anthems on the hour. It’s crowned by a gilded finial of the Statue of Liberty.

The clock looks good after nearly a year under the care of Stair Restoration in the Hudson Valley. There, a metalsmith, clockmaker and four conservators took everything apart —methodically documenting more than 100 wood and metal elements — and cleaned, stripped, rebuilt, repaired, refinished, regilded and resilvered each piece as needed before putting everything back together. Our guess is it hasn’t looked this spiffy since it left London’s Goldsmiths’ and Silversmiths’ Company where it was created between 1880 and 1889.

The clock isn’t the only piece of Waldorf history on loan until the hotel reopens. Down the hall stands John F. Kennedy’s high-backed wooden rocking chair, encased in plexiglas. The 35th president suffered from severe back pain. The chair is one of a dozen or so rockers he installed in places that he frequented like Hyannis Port, Camp David and the Presidential Suite at the Waldorf. As evidenced by the chair’s humble plaid upholstery, he prized functionality over style.

The Fabled Plaza Hotel Is For Sale -- Again
Strolling Through The Waldorf Astoria on the Final Night of its 85-Year Run
What Would Conrad Hilton Think of the Waldorf-Astoria's $1.95 Billion Sale?
Is the Waldorf Astoria to Be Sold Yet Again?
Why the Waldorf Astoria is Closing for Renovations, and Why You Should Stop By While You Can
Madeline and the Ritz -- How Hotels Influenced the Life and Art of Ludwig Bemelmans
0 replies

The Met Museum Returns With New Shows, A Fresh Look And A Friendly Attitude The Merriest New York City Hotel Decorations of 2020 — Holiday Cheer in...
Scroll to top