We’re partial to holiday decorations displayed at New York City hotels. But this year we couldn’t resist including the edible art on view at the Waldorf Astoria Beverly Hills, a spirited creation with an unexpected link to New York City. 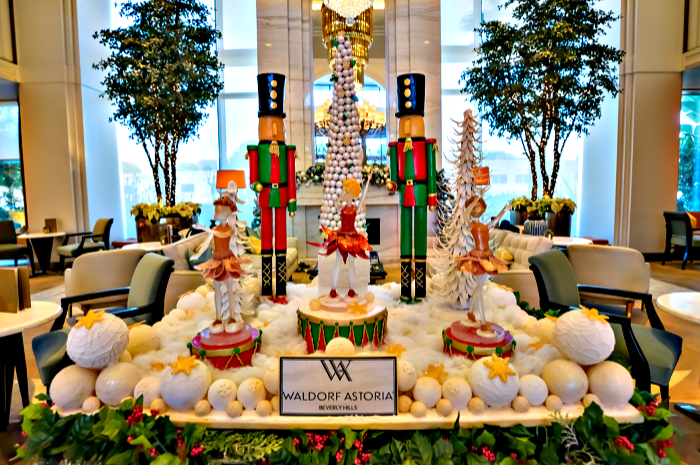 The display is a whimsical ode to the Los Angeles Ballet’s holiday performances of The Nutcracker throughout the LA area. Additionally, the hotel hosts annual holiday Nutcracker teas inspired by the ballet.

But the theme is a natural for grand-scale edible art. Act II is all about sweets, after all — dancing Candy Canes, Hot Chocolate, Marzipan and a Sugarplum Fairy, to name a few.

Executive Pastry Chef Deden Putra kept all that in mind as he and his team devised a fanciful tableau populated by chocolate holiday trees, lollipop ballerinas and a pair of chocolate nutcrackers standing almost three feet tall. 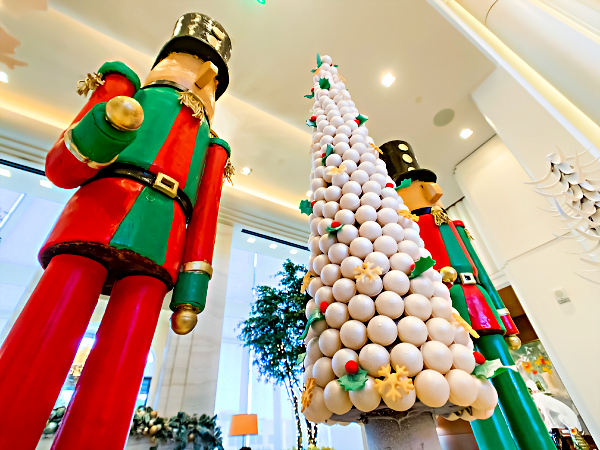 If you’re tempted to try this at home, keep in mind it’s a 35-hour job and requires a banquet-size ingredients list:

Creating the sugar ballerinas, Putra says. “They’re very fragile and delicate. And of course, moving the whole display from the pastry kitchen to the lobby was another big challenge.” 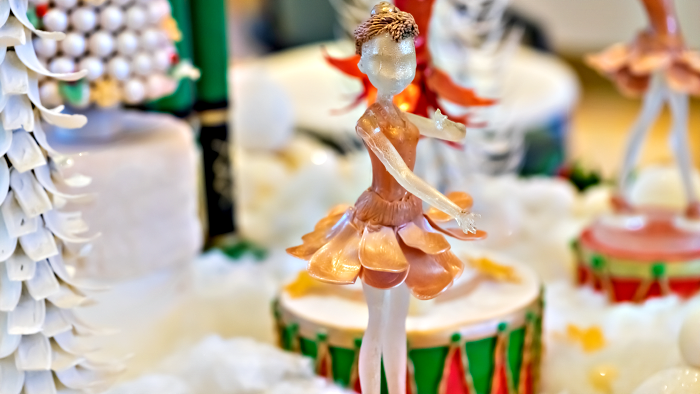 Holiday eye candy is Putra’s specialty, which leads us to the New York connection. We discovered his holiday handiwork nine years ago in the lobby of New York’s Jumeirah Essex House Hotel (now JW Marriott Essex House). Standing up to a fully decked out Christmas tree, a towering gingerbread replica of the iconic Art Deco hotel stretched 10 feet into the air, perched on a bed of white icing and outfitted with 700 tiny windows and miniature icing wreaths. The product of 48 lbs. of sugar, 48 lbs. of margarine, 17 quarts of milk, 180 lbs. of flour and 3 1/2 lbs. of spices, it looked — and smelled — terrific.

Its creator, we discovered, was a self-effacing pastry wizard from Indonesia who looked upon holidays as opportunities for orchestrating team-building exercises and unleashing creativity. 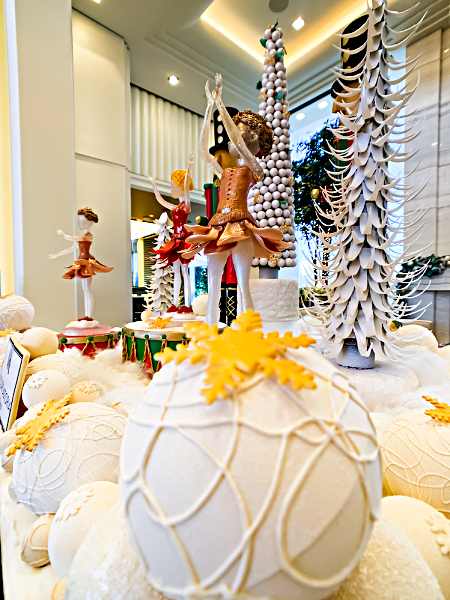 A move to the Peninsula New York in 2012 gave Putra another historic backdrop. Few hotels embrace the holidays as effusively (and thoroughly) as the Peninsula. Putra was in his element. His creations included lollipop reindeer more than three feel tall, a white chocolate family of snow people topped with round white caps like Peninsula pages and a gingerbread rendering of the hotel complete with rooms furnished with stylish tables, chairs and beds rendered in iced gingerbread, a confectionary doll house Florine Stettheimer would have adored. 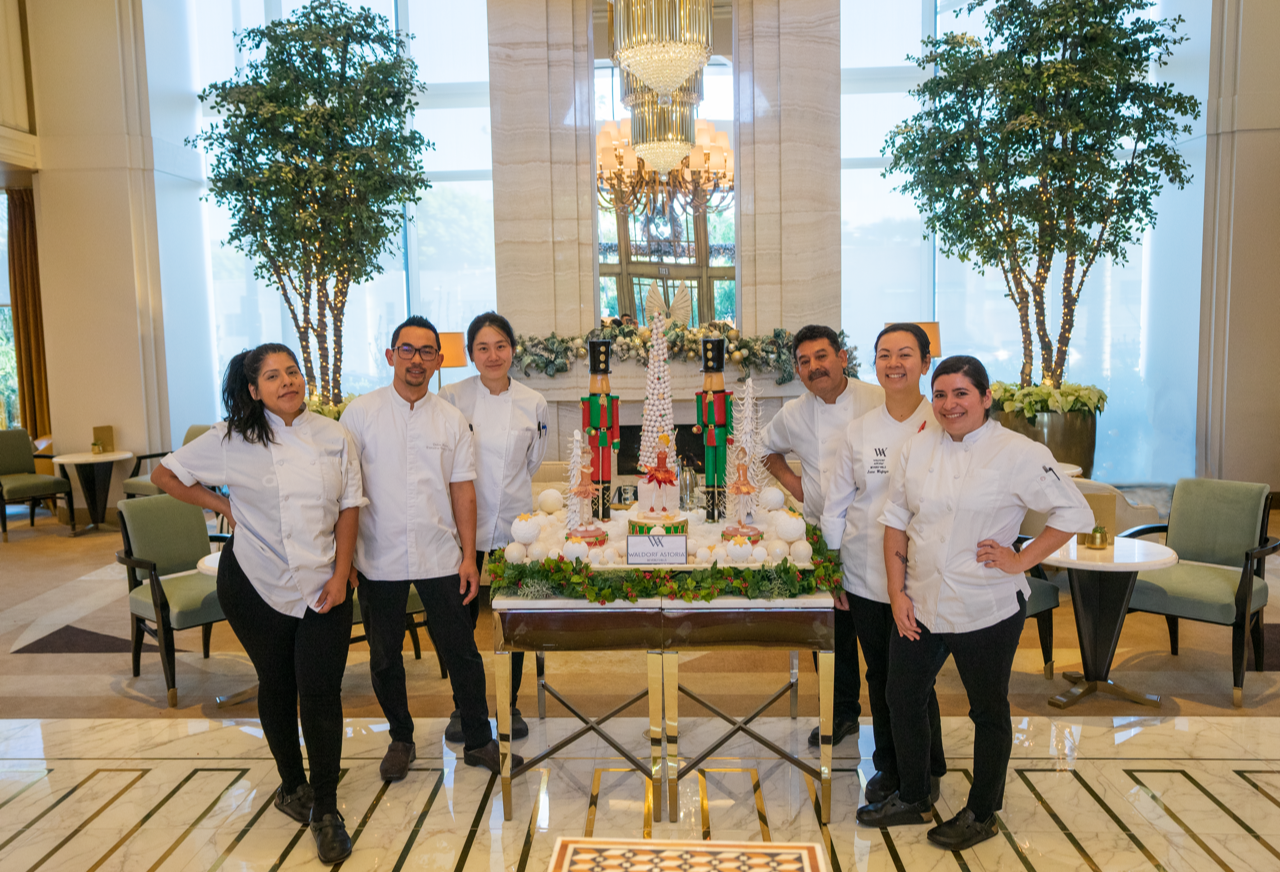 Alas, the gingerbread hotel was his farewell winter holiday creation on the East Coast. In 2017, the Waldorf Astoria lured him to Los Angeles. The edible art scene at New York City hotels hasn’t been quite the same.

Still, there’s plenty of sugarplums on view at New York hotels. This year is particularly eye-catching as you’ll soon see in an upcoming post.

On Their Toes: The Joffrey Ballet Offers Tips on Grace and Poise to Staffers at JW Marriott
Hunting Down the Best Chocolate Easter Eggs at New York City Hotels
Is This The Biggest Chocolate Easter Egg in New York City?
The Peninsula New York Launches a Summer Festival of French Movies on its Roof — With Pastries
Redirecting Hello Kitty: Macy’s Thanksgiving Day Parade Gets a New Route for 2012
Are The Peninsula Hotel’s Gigantic Reindeer Really Lollipops?
0 replies

Our Top Picks from the 2019 Hotel Trade Fairs — Or What You May See on... The Happiest, Merriest Holiday Decorations at New York City Hotels, 2019 Ed...
Scroll to top