It was nearly two years ago that Covid muscled into New York City and shuttered more than 30 percent of the city’s 705 hotels — a significant number of them permanently.

Not every hotel that closed during the pandemic was a gem. But some are too notable to slip away without a few words of appreciation. Our first batch of hotel obituaries posted last fall with six Covid casualties we couldn’t let go without a send off.

Since then we’ve gathered a second batch — six more hotels that didn’t survive the pandemic but deserve one last look. 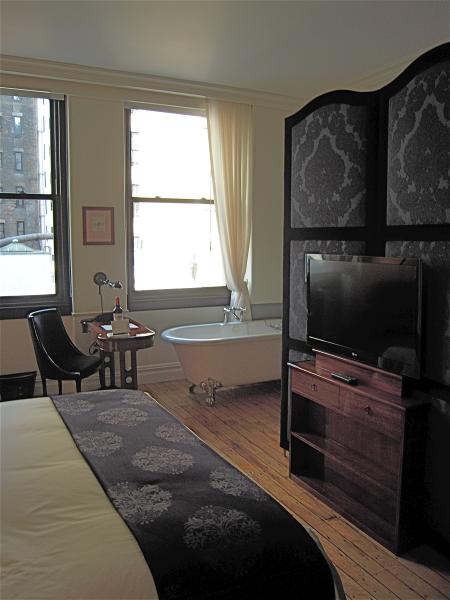 Bathtub in the bedroom at the NoMad (Overnight New York photo)

Seeing the NoMad boarded up is sad but also surprising. When the NoMad opened in 2012, it felt like a keeper, a hotel so eye-catching and original that it accelerated the transformation of the once-desolate blocks north of Madison Square Park. Taking his cues from the hotel’s location in a century-old, Beaux Arts office building, French designer Jacques Garcia devised opulent, fanciful interiors that immersed you in a heady, fin de siècle Paris that Proust might have recognized, minus the 21st-century technology, Michelin-starred restaurant overseen by the creators of Eleven Madison Park and hopping bar dispensing some of the most inventive craft cocktails in Manhattan.

The NoMad was a haven. The aptly named Library bar sported polished wood shelves, an oriental rug and a formidable array of books organized by topic instead of spine color. Fringe-edged sofas and wildly printed, velvet club chairs gave off an Edith-Wharton-meets-F Scott-and-Zelda vibe in the lobby. And the white, claw-footed bathtub in my room stood beside a window that overlooked the Empire State Building, an unexpected bubble-bath amenity. The NoMad spawned thriving siblings in London and Las Vegas (on the Strip, no less, complete with a casino). A third in LA plans to reopen soon. But not the mother ship. And that’s a shame. 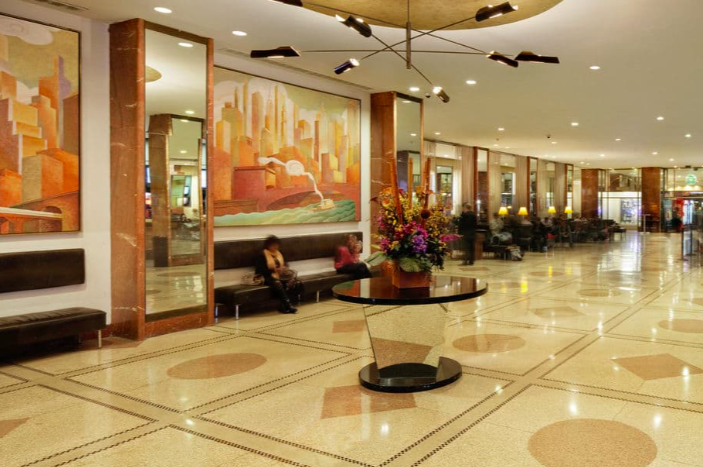 This is the second time we’ve written an obit for the Hotel Pennsylvania. In 2010, the end seemed near when the New York City Council approved a proposal for a skyscraper at 15 Penn Plaza, home to the celebrated but worn-out behemoth designed in 1919 by McKim, Mead & White as a Pennsylvania Railroad station hotel. That didn’t happen. But this time, expect the wrecking balls. Declaring the Hotel Pennsylvania “decades past its glory and sell-by date,” Vornado Realty Trust unveiled a blueprint in 2021 for The Penn District,  a gleaming tech village enveloping Penn Station and its surroundings — hotel not included.

With 2,200 rooms that eventually telescoped down to “a mere” 1,704, New York City’s biggest hotel welcomed millions of guests, celebrated and not so, for a century. Silent film siren Clara Bow frolicked in a champagne bubble bath during a $40,000 party thrown by an out-of-town crime boss, or so the story goes. William Faulkner labored over a novel, holed up in a guest room in December, 1925. And as fans of the old movie The Glenn Miller Story know, a novelty song from the 1940s was inspired by the hotel’s phone number PEnnsylvania 6-5000. But by the time the hotel became the preferred base camp for top dog wannabes at the Westminster Kennel Club Dog Show, the Penn’s glory days were long gone, along with the lobby’s Doric columns, decorative glass ceiling and crystal chandeliers (flood lights, anyone?). The last time we visited, we couldn’t decide if the lobby –brute, low-ceilinged and  jammed with backpackers, package tours and snoozing guests — reminded us of a Soviet-block hotel or Newark Airport. In a Hail Mary effort, guest rooms were spruced up a few years back, but that didn’t address the jaw-drop-expensive infrastructure issues needed to drag the Penn into the 21st century. Vornado got it right. Sometimes a hotel just runs its course. The pandemic speeded things up. 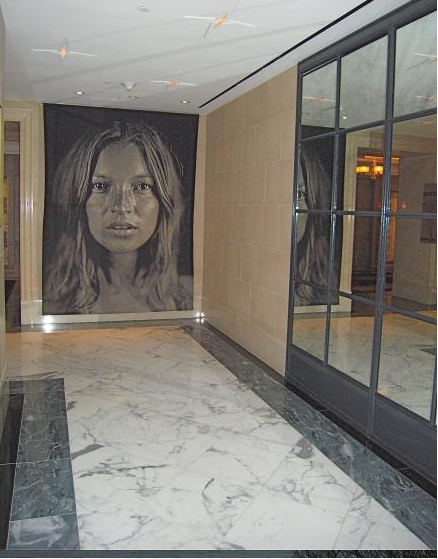 The Surrey was a flourishing, Upper East Side hotel with a glamorous, art-filled lobby and a sexy, grown-up bar when the pandemic closed it temporarily in March, 2020. After that, everything nosedived. Closure losses resulted in an involuntary bankruptcy after the hotel’s owner, Denihan Hospitality Group, missed a ground lease payment. That led to an ownership change, and that led to a $150 million sale to Rueben Brothers, a UK investment company that snapped up other choice pandemic-stretched NYC properties, notably the Park Lane, Chatwal, Time Hotel and Dream Midtown. Set to reopen in 2023, the Surrey will be revamped top to toe with new management by Malta-based Corinthia Hotels and a new look by Martin Brudnizki Design Studio, the inventive design team behind New York’s spiffy Beekman hotel.

And the Surrey that exited during the pandemic? Just a memory, but a delicious one. Built in 1926 as a stylish residential hotel, the Surrey attracted megawatt movie stars like Bette Davis and Claudette Colbert, offering urbane style and uptown privacy. As its luster faded, it downshifted into proud, shabby-sort-of-chic gentility, housing guests priced out of the Carlyle and a dependable contingent of freshly divorced locals. Its days as an unrealized, 190-room asset ended with a $60 million renovation in 2009, devised by architect Lauren Rottet. The result played up the hotel’s sophisticated beauty, a mix of Art Deco glamour, Woman of the Year elan and Upper East Side polish. A colossal portrait of Kate Moss by Chuck Close greeted visitors in the lobby. The elegant, black-and-white guest rooms sported king-size, Duxiana beds. And the inspiration for the swanky lounge? A quilted black leather Chanel bag. Brudnizki has a tough act to follow. 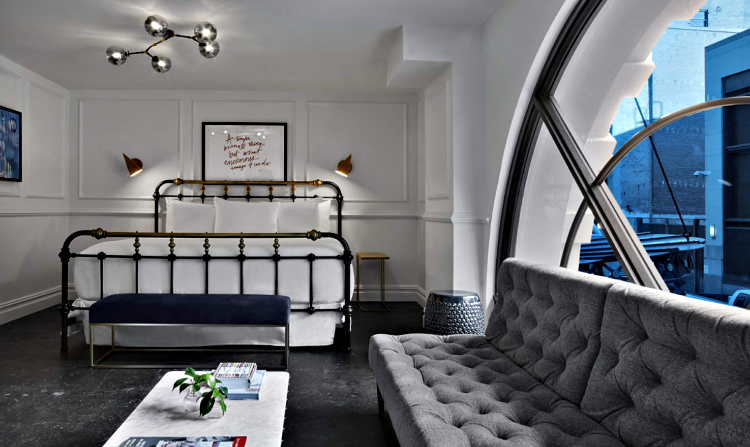 Brief Life might be a better name. Luxe Life had the misfortune to open in February 2020, all but dooming the 98-room boutique hotel. And that’s a shame. Luxe Life was a stylish property that made the most of its modest, Herald Square home gifted with old but captivating bones and a glamorous history. Designed by architects Carrère and Hastings, the firm responsible for the Fifth Avenue New York Public Library, the building housed Life magazine — from its early days in 1895 as a cartoon-filled, light entertainment publication through its 1936 transformation into America’s premiere photography magazine. Vintage Life covers showcasing the pre-Instagram glamour of Katherine Hepburn, Marilyn Monroe and Clark Gable adorned the walls, and ornamental wrought-iron beds brightened the eye-catching guest rooms that owed much of their charms to an $8 million renovation in 2017 by the previous owners. With luck there’s a new owner waiting in the wings to give this appealing property another chance at life. 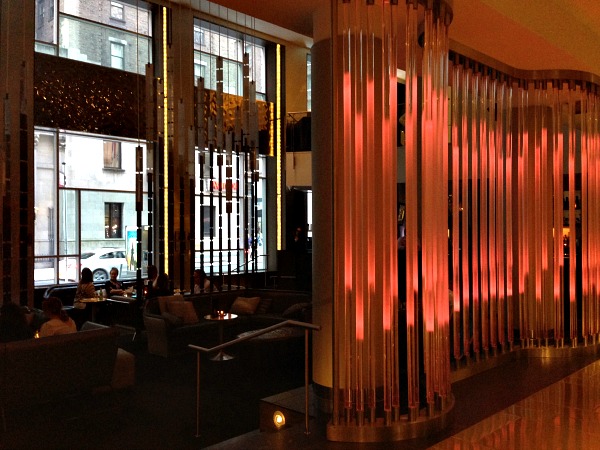 Maxwell had one notable trait: it took over the premises of the W New York after the purposefully hip W chain dropped the hotel in 2018. Set in a charmless, aging building with (mostly) teeny rooms, W New York could no longer rightfully command $500 a night. But as the newborn W New York back in 1998, the 688-room, brick behemoth was a game changer — the first W hotel ever and the first boutique hotel created by a large hotel corporation, in this case Starwood. W New York introduced the now-classic W recipe — lobbies called Living Rooms, high-concept restaurants, pillow-top beds and pulsating bars that attracted locals. It embodied the 90s boutique hotel formula to a T — resurrect a run-down urban heap, install fresh bathrooms and orchestrate a big, buzzy lobby to distract guests from the fact that their exquisitely choreographed guest rooms were the size of monk cells. Times changed. Spiffier Ws arrived, accompanied by Moxys, Alofts and other shiny corporate boutique brands. Despite a Hail Mary renovation in 2014, W New York was no longer luxurious or cool. Renamed Maxwell and priced from $150 to $250 a night, the former W offered good value — just not good enough to withstand a pandemic. 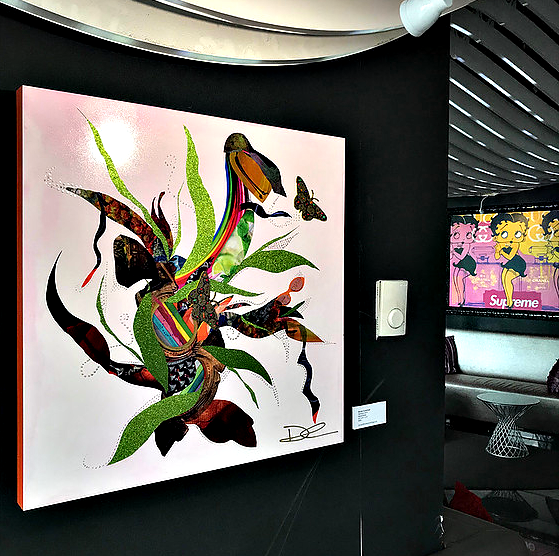 And then there were three. With the demise of the flashy W New York Downtown Hotel & Residences, W’s metropolitan New York footprint shrank to W Union Square, W Times Square and W Hoboken — down from five before the demise of W New York in 2018. After a ten-year run, the 56-story W Downtown across the street from Freedom Tower closed in October 2020, eliminating 217 stylish, sizable and somewhat soulless guest rooms and depriving the building’s 223 luxury condo residents of hotel amenities that included a gym, screening room and preferred seating at the BLT Bar and Grill and Living Room Lounge, a clubby lair whose swooping ceiling lights gently brightened and dimmed, like intakes of breath. Observing the W manifesto, W Downtown reveled in buzzy outreach events, hosting movie nights with Spike Lee and Isaac Mizrahi and adorning the building with works by their annual artists-in-residence. Precisely the sort of entertainments that don’t happen in a pandemic.

Update: Late last year, the hotel reopened as the Washington New York City, named for the street it calls home (and no need to change the initial cap). Though no longer a W, the hotel looks unchanged with one big difference: room prices currently start at $134 (book quickly if you’re looking for a bargain; they go up in March).

And in case you missed them. here is our first batch of obits for NYC hotels that closed permanently during the pandemic.