It’s cold outside. Dark, too. But an army of New York City hotels stands at the ready with an instant antidote to the gloom. Lights! Trees! Ornaments! Photo ops!

Whether it’s in response to the drumbeat of turbulent news or just a reflexive urge to be hospitable, the city’s hotels seem especially merry and bright this year. And that’s reason to cheer. So before the year’s up, take a few minutes to admire the choreographed exteriors, then duck into as many lobbies as you can. Or scroll down and drink in what we saw. END_OF_DOCUMENT_TOKEN_TO_BE_REPLACED

We’re partial to holiday decorations displayed at New York City hotels. But this year we couldn’t resist including the edible art on view at the Waldorf Astoria Beverly Hills, a spirited creation with an unexpected link to New York City. END_OF_DOCUMENT_TOKEN_TO_BE_REPLACED 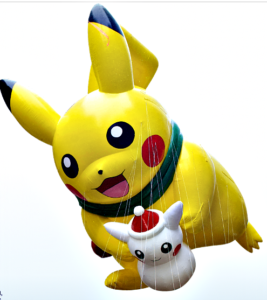 Where do you want to be when Astronaut Snoopy, Pikachu and Santa wend their way to Herald Square in Macy’s Thanksgiving Day Parade?

A nice warm hotel room with a room service breakfast and big clean windows overlooking the festivities sounds good to us.

We found ten hotels with superb locations along the parade route, winding from Central Park West to Central Park South and down Sixth Avenue. Click here to read our post, updated for 2019, on parade hotels, complete with a dab of parade history.

What’s the best way to thwart the darkness this winter? Light it up!

New York’s hotels seem especially merry and bright this holiday season. Even construction scaffolding is embellished. Maybe it’s the easy availability of LED lights. Or the primal urge to out-decorate the competition. Or perhaps it’s just a simple desire to drum up some cheer.

Can’t come to New York to see what’s aglow? Here’s a sample of what’s on view at Manhattan hotels Downtown, Uptown and in the middle.

Or you can check into a hotel along the parade route and and tuck into a room service breakfast as the world’s largest parade passes by. END_OF_DOCUMENT_TOKEN_TO_BE_REPLACED 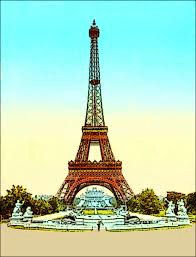 Bastille Day is right around the corner (Saturday, July 14 to be precise). And France is in the World Cup finals on Sunday. Do you need any more reasons to dig into French Restaurant Week 2018 in New York?

This year 22 restaurants around town encourage you to Eat Drink and Be French with three-course lunches for $25, three-course dinners for $38 or a special multi-course $178.89 prix fixe feast for two through July 15. Two are at hotels. Bon appétit. END_OF_DOCUMENT_TOKEN_TO_BE_REPLACED

Macy’s unleashes their patented July 4 ode to the rockets’ red glare, aka the Macy’s Fireworks Show, tonight from a fleet of barges floating in the East River between 22nd and 42nd streets. That make Fireworks 2018 a three-borough spectacular, with viewing opportunities throughout much of Manhattan, Brooklyn and Queens, provided there’s nothing tall to obstruct your view (good luck). END_OF_DOCUMENT_TOKEN_TO_BE_REPLACED

We’re always happy to hear about new hotels, particularly innovative properties with unexpected amenities. Which brings us to the news release we received today that Ace hotels plans to open their first forest outpost in West Linn, Oregon.

Billed as “an experiment in urban arcology,”  the planned Ace Hotel Hobbit House is set to open in Winter 2018. It will occupy a domed one unit property with a skylight built deep in the West Linn woods by a mime trained by Marcel Marceau who happens to be a self-taught designer and builder. END_OF_DOCUMENT_TOKEN_TO_BE_REPLACED

It’s hard to recall a colder, darker New York City holiday season than 2017. But for much of the month, an upbeat antidote to the relentless chill could be found at the city’s hotels — enough to make it worth your while to duck into a lobby for a welcoming blast of warmth and sparkle. Before the year slips away, here’s a last look at how some of our favorite hotels dressed up for the holidays. END_OF_DOCUMENT_TOKEN_TO_BE_REPLACED 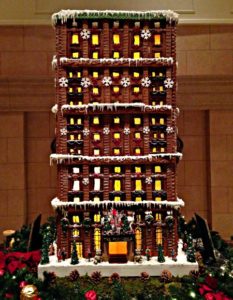 You can think about opening a bakery. You can spend the foreseeable future baking cookies. Or if you happen to be Deden Putra, Executive Pastry Chef at the Peninsula New York, you can create a five-star gingerbread hotel that stands six feet tall and smells as inviting as it looks. END_OF_DOCUMENT_TOKEN_TO_BE_REPLACED