No hotel has ever won an Oscar. But that does not mean hotels haven’t had close ties with the Academy Awards over the years. 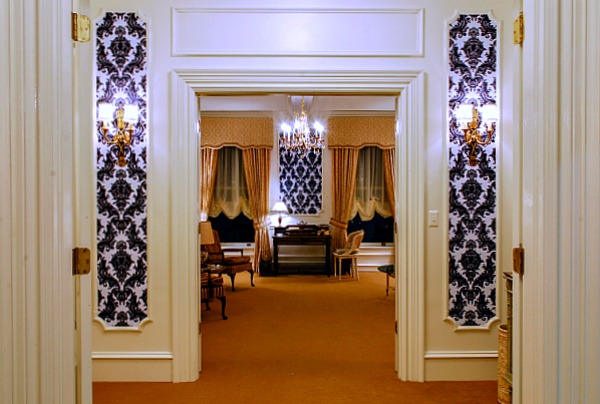 The Plaza dressed up for the 1970s — and American Hustle

The first awards ceremony was held at the Hollywood Roosevelt Hotel in 1929. Just three years later, Grand Hotel, set in a fictitious Berlin hotel, won Best Picture and launched a genre of “grand hotel” movies where strangers are thrown together in a big, bustling place and random lives intertwine.

When Hollywood decided to do a Grand Hotel remake in 1945, Weekend at the Waldorf was filmed on location, the first movie to be shot at a hotel. Check it out in all its black-and-white glory next time you visit the hotel. It plays continuously, if soundlessly, on a small screen in The Waldorf’s glass-encased lobby museum.

Hotels and movies continue to play nice. And New York is a go-to city when directors want a hotel shot that’s memorable or evocative or just says hotel (or New York). The Roosevelt and the Waldorf each boast more than 10 movies shot on site. More recently The Carlton and The Standard High Line have racked up notable film and TV credits.

But with more than 30 movies to its name, The Plaza is hotelland’s Meryl Streep, with big-time star turns in North by Northwest, The Way We Were, Crocodile Dundee, Sleepless in Seattle, Home Alone 2 and Almost Famous, among others.

And in 2013, American Hustle and The Great Gatsby. Both go head to head this Sunday with nominations for Best Production Design and Best Costumes (American Hustle landed some bigger nods as well). Earlier this year I chatted with Judy Becker, Production Designer for American Hustle, about how she dressed up the Belle Epoch Plaza for the disco 70’s and the Abscam scandal. (Think pitch-perfect flocked wallpaper.) For the full story, read on.

For The Great Gatsby, Production Designer Catherine Martin not only devised a cinematic Plaza suite where Daisy, Gatsby & Co. down cocktails but also created a Fitzgerald Suite for the hotel, replete with photos of Scott and Zelda and custom Deco-flavored furniture by RH Restoration Hardware. It can be yours for $2,795 a night, complete with a bottle of champagne.

And a final New York hotel connection to this year’s Oscars. Blue Jasmine, nominated for three Academy Awards including Cate Blanchett for Best Actress, features a pivotal scene shot in front of the Tribeca Grand. Hotel exteriors can be as iconic and evocative as interiors. And unlike cinematic interiors, the exteriors are usually the real deal.

Still Shopping? Check Out Overnight New York’s Second Annual Last-Minute Hotel Holiday Gift Guide
So Long, Waldorf: Why The New York Palace Is the President’s New NYC Home Away From Home
Lady M Unleashes ‘Bitch I’m Madonna’ — And Stages Her All-Night Party at The Standard Hotel
Where Did Beyonce Check In When She Wanted to Shoot a Sexy Music Video?
Coming Soon: New Owners for The Plaza Hotel; What Will They Get for $600 Million?
It’s Spring — in These NYC Hotel Lobbies (Even if it Still Feels Like Winter Outdoors)
3 replies

Up in the Air: Having a Drink at the Tallest Hotel Bar in New York Keeping Goldilocks Happy: Four Seasons Hotels Rolls Out New Customized Beds
Scroll to top