No sooner do we get a new hotel that sets a height record for New York (and North America), than up pops Bar 54 at the new Hyatt Times Square New York, the tallest hotel bar in town. Is it a coincidence that our new mayor is New York’s tallest ever?

Even in a height-obsessed city a bar on the 54th floor qualifies as up there. Bar 54 crowns this new glass-box hotel like a fedora, its floor-to-ceiling windows bordered by expansive open-air terraces that should be breathtaking if the weather ever warms up. For now the bar, which opened last week, is strictly an indoor affair. 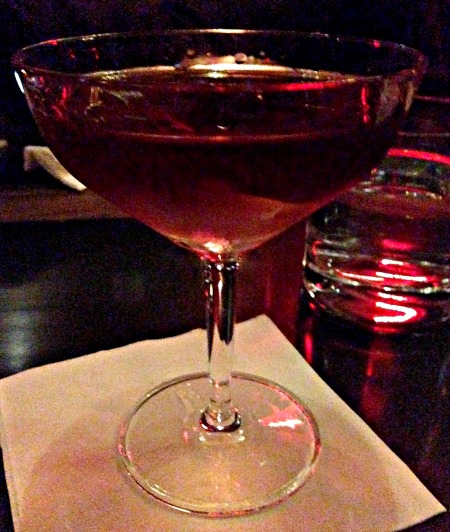 Maybe it was the snow on the ground but the bar reminded me of a chic ski lodge. The elevator delivers you to a long narrow room lined in horizontal wood beams, a 21st-century take on a Mad Men lounge minus the cigarette smoke. You’re greeted by a mixing station, fronted by bar stools. Sofas and club chairs hug the walls by two sets of windows – one facing downtown, the other uptown. And in the middle a communal table seats a dozen.

That’s where my companion and I wound up when we arrived around 7 p.m. without having booked – and after cooling our heels for 15 minutes in the hotel’s ground floor restaurant awaiting a table (there’s no obvious waiting area up high).

Fortunately, every seat in the house seems to have a window view of some sort, including those at our table. We were eye level with the new – and much reviled — H & M sign atop the Conde Nast Building and a galaxy of lights from the Bank of America Building. Looking out the windows on the opposite side we gazed down at midtown Manhattan. You can probably see all the way to Central Park, but it was too dark to tell. Still, the urban skyscape was pretty spectacular. 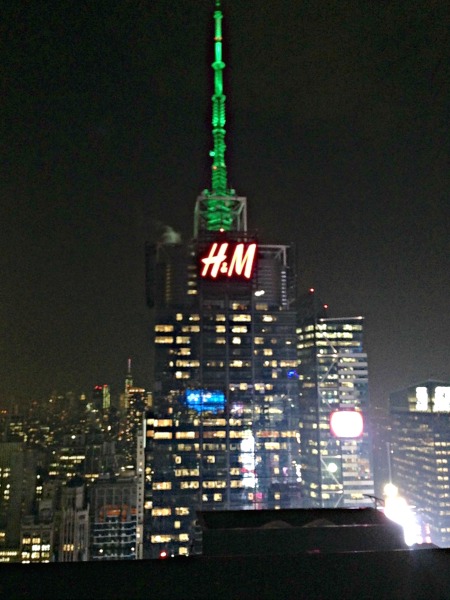 The drinks were pretty spectacular, too – as are their prices ($23 cocktails, a 2010 California specialty red at $48 a glass). Like an increasing number of hotels, Hyatt brought in outside talent to concoct its cocktails, namely uber-mixologist Julie Reiner, known for inventive, fresh-everything drinks infused with fruit.

“You want Rhapsody in Rye,” a bartender at the lobby restaurant said upon hearing we were on our way back upstairs. (Reiner created a different set of drinks for the downstairs bar — $16 cocktails, but no view.) Taking his advice, I was rewarded with a memorable mix of Bullet Rye, Ramazzotti Amaro, Benedictine, dry vermouth and Angostura & orange bitters straight up in a stemmed cocktail glass. (Thank you, James.) My companion, a Vesper fan, happily downed his blend of Plymouth Gin, Stoli and Lillet.

We skipped the Champagne and ventured onto the terrace. Clear but frosty, it was not a night for lingering. But once the Polar Vortices blow out, this is where you want to be — especially if you think the best way to see Times Square is at a distance.

Like “The Lego Movie” — and Legos? Check Out the Lego Wall at Yotel... And The Oscar Goes To: NYC Hotels with Supporting Roles In the 2014 Academy...
Scroll to top