Back in the 1980s you had to check your weapon before entering the Manila Hotel, the ritziest hotel in the Philippines. Another grand dame hotel on the other side of the world may want to follow that example.

No one was seriously injured in the shooting at the Waldorf-Astoria during what has become the Wedding of the Weekend, never mind that no one knows who actually got married. Still, “Hotel Hell,” as the Daily News put it, isn’t exactly the front page headline hotel PR people dream about. 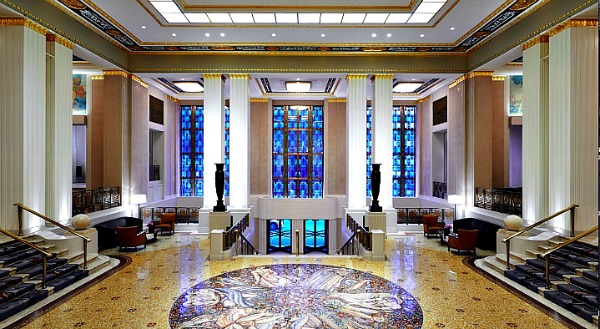 The saga, in case you missed it, unfurled in the Waldorf’s freshly restored Park Avenue lobby, where the bride and groom were posing for pictures against a storied Art Deco backdrop of creamy white columns, polished mosaic floors and enormous silver urns.

On Saturday night at around 7:30 p.m., the festivities halted abruptly when a gun owned by one of the guests went off (accidentally according to reports), shooting a hole through the shooter’s pocket and injuring four guests, including a woman in a long black cocktail dress whose forehead was grazed by a bullet.

The 42-year-old gun-toting guest, apprehended at the scene in a sedate navy blue suit, has a permit to carry a weapon, and as the owner of a liquor store in the Bronx carries it for protection, police told the New York Post. Why he felt the need to arm himself with a 9mm Ruger at a fancy wedding remains an unanswered question.

It appears his permit cleared him, more less. But when the gun went off he panicked, handing the weapon to his brother, who gave it to their mother, who passed it to the gunman’s wife. The ensuing round of hot potato led to charges of evidence tampering and illegal weapons possession against the brother. The gunman was charged with tampering with physical evidence, reckless endangerment and assault with criminal negligence, police said. Being a lousy wedding guest isn’t a crime.

The last high profile accidental shooting at a hotel was in 2008 when former New York Giants wide receiver Plaxico Burress unintentionally shot himself in the thigh with an unlicensed handgun at LQ, the nightclub at the Radisson Lexington, two blocks south of the Waldorf. Sentenced to two years in prison on two counts of criminal possession of a weapon and reckless endangerment, he wound up serving 20 months.

As for the Waldorf, a morning-after visit showed business as usual wherever we looked. Every table was taken in Peacock Alley, home to the hotel’s lavish Sunday brunch buffet ($99 for adults, $65 children ages 5 to 12), where a pianist played Gershwin tunes on the art-case piano once billeted in Cole Porter’s Waldorf Towers apartment.

The Park Avenue lobby looked just normal, with no obvious blemishes to the floor or walls from the previous night’s fracas. No gunplay ensued. And on Sunday morning no weddings were disrupted, at least not on our watch.

And The Oscar Goes To: NYC Hotels with Supporting Roles In the 2014 Academy Awards
Where the Swells Stayed — A New Pictorial History of the Waldorf Astoria
So Long, Waldorf: Why The New York Palace Is the President’s New NYC Home Away From Home
The Unofficial Mad Men Guide to New York City Hotels
1 reply