This is shaking up to be the biggest year in memory for good eggs in New York.

First came the Fabrege Big Egg Hunt, which deposited 250 gigantic eggs decorated by artists, designers and bold-face names around town, including at hotels (it ends April 26). And as we zero in on Easter, hotel pastry chefs are proving, once again, that chocolate is a natural companion to the egg.

I always stop by The Peninsula New York when a holiday nears to see what’s new from executive pastry chef Deden Putra, who never lets a red-letter occasion go by without creating something witty, like life-size lollipop reindeer or a gigantic white chocolate snowman. 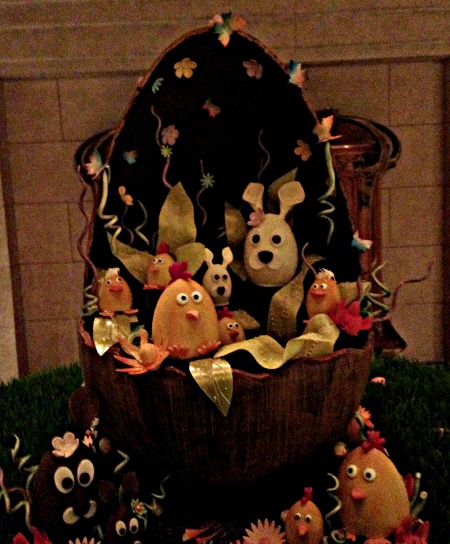 A good egg at the Peninsula

This spring the Peninsula pulled out all the stops, with an enormous garland of flowers framing the entry and two big eggs from the Big Egg Hunt on view, including one – colored yolk yellow and white – crowning a limousine parked in front of the hotel.

But it’s impossible to miss the three-foot-tall egg fashioned from 40 pounds of chocolate that’s sitting on a table in the middle of the mezzanine. A salute to the charms of chocolate, it’s au natural – a large brown orb cracked open and jam-packed with fanciful chocolate bunnies, chicks and butterflies. Still more are perched on the back of the egg and congregated around the edges.

“The idea was to express how happy we were that it was finally spring after the long winter we had,” says Putra, whose team of four pastry chefs spent five days cooking up the egg.

Why use chocolate? “We used white chocolate for last year’s egg and wanted something different. And it goes with this year’s theme and looks natural,” he says. Bonus: it smells divine. (The hotel newsstand sells chocolate eggs if you suddenly find yourself craving something sweet.)

Over at the Four Seasons New York, executive pastry chef Jasmina Bojic and her team spent the last two weeks fashioning 150 pounds of chocolate into a spectacular Easter village to adorn the hotel’s prix fixe three-course Easter Brunch at the Garden Restaurant. You’ll see the display – technically edible, but you know better — as you walk into the restaurant. Additional chocolate orbs, dressed in colorful  ganache, are teased at the edges of the flower planters.

The display goes up Easter Sunday morning, but so consider these images a straight-from-the-kitchen preview. Count butterflies, mushrooms, bumblebees and honeycomb (fashioned from white chocolate and dusted with gold) among the springtime motifs.

“Ten years ago it was so hard to create a showpiece with chocolate and sugar,” says Bojic. “It’s still a challenge, but there are so many tools available now, the process is easier, cleaner and crisper.”

The results say Spring is here  at last!

Jumeirah Essex House Celebrates Easter with Gigantic Faberge Eggs — in Chocolate
Is Hotel Room Service on the Way Out — And Do You Care?
Five New York City Hotels to Check Out Before the Holidays Wind Down
Meet the Peninsula New York (Edible Version), the Ultimate Gingerbread Hotel
Is This The Biggest Chocolate Easter Egg in New York City?
The Peninsula New York Launches a Summer Festival of French Movies on its Roof — With Pastries
0 replies

Where the Swells Stayed — A New Pictorial History of the Waldorf Asto... Hunting Down the Greenest Hotels in New York City
Scroll to top