Nothing promotes time travel like a grand hotel. Step inside and you’re whisked to another era where you can imagine yourself trading stories with Winston Churchill or Grace Kelly, Cole Porter or the Duchess of Windsor, albeit with locally sourced menus and WiFi.

New York’s Waldorf Astoria is one of these full-throttle time machines. If walking into its soaring Art Deco lobby doesn’t deposit you in 1931 or 1945 or whatever 20th-century moment you crave, Waldorf Astoria, a new book by William Alan Morrison should do the trick (Arcadia Publishing; $21.99). 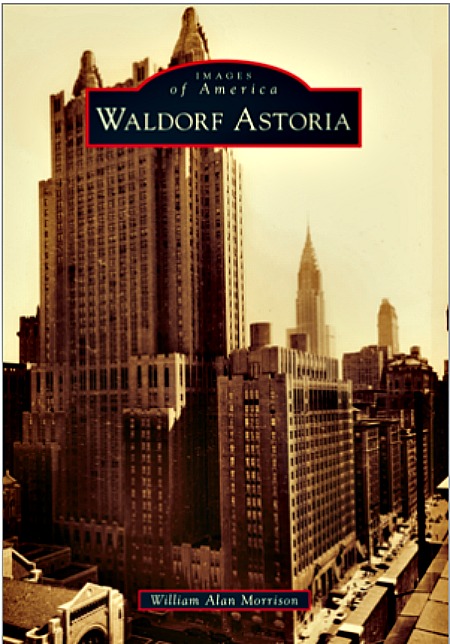 Waldorf Astoria — by the book

Through nearly 200 vintage pictures with meaty captions Morrison tells the story of the two Waldorf Astorias. The Waldorf and the Astoria – Gilded Age beauties built by rival branches of the Astor family – set new standards for luxury when they opened in the 1890s on the current site of the Empire State Building at Fifth Avenue and 34th Street. After fiery negotiations between the contentious cousins, the two hotels were linked by a lavish corridor, called Peacock Alley — and a hyphen — and the Waldorf-Astoria was born.

As for the towering Waldorf Astoria we know today on Park Avenue and 50th Street, it was the largest, tallest and most expensive hotel ever built when it opened in 1931.

Morrison, a history buff from Philadelphia with hotel bona fides — his first New York job was at the front desk of the Biltmore — spent hours in the photo archives at Columbia and Princeton universities and the hotel. He never worked at the Waldorf, but his parents held their wedding reception there in 1938.

I talked with him recently about New York’s original grand hotel.

The Waldorf holds a unique place in hotel history.

The initial hotel changed the whole nature of the hotel business in this country. After the Waldorf-Astoria opened every city wanted its own grand hotel. Before the Waldorf when you went to a hotel in New York there were 500 rooms tops, and the hotels were all on Broadway. You’d go into the lobby, and there were no chairs because you were supposed to go wait in the saloon and order a drink.

And The Waldorf-Astoria, with its restaurants, banquet halls, lobbies and shops, helped change that.

The Waldorf was among the first hotels to popularize the idea of providing all the services within four walls. Before that you were lucky if there was anything besides a saloon with a free lunch at your hotel.

Those saloons were for men only, weren’t they?

Women were rare in hotels. Unaccompanied women were immediately assumed to be prostitutes if they were seen in a hotel lobby. But George Boldt, who became the proprietor of the hotel after helping convince the Astors to link their two properties, said, ‘if we could make a hotel for the rich, they would have the money to pay for it.’

You’ve got a terrific picture of the eight senators who met in a large room at the Waldorf to hear testimony from survivors of the Titanic.

The irony is John Jacob Astor, IV, who opened the Astoria, went down on the Titanic. So you have the inquiry going on in the hotel he built 15 years earlier. Astor was coming back to New York after a long honeymoon in Europe and the Middle East with his second wife, Madeline Force Astor, who survived along with their unborn son.

Peacock Alley, which connected the original Waldorf and Astoria, looks a bit like the current Waldorf’s Versailles hallway — with seating.

It’s just a long corridor that runs the length of the hotel from one end to the other. But I love the stories about it. There was one in the Times that called it the closest thing New York has to a Main Street. If you sat there long enough, you’d see everybody you know in New York and everybody you’ve ever heard of. It’s different from the boutique hotels today where they try to keep people out. Back in those days it was a parade, and the idea was flaunt it, baby.

I was fascinated that the original hotel had so many shops, including an enormous florist. Large hotels still do fancy floral arrangements, but not on such a grand scale.

All the tables in the hotel dining room would have floral centerpieces. And if the ballroom or banquet rooms were being used they’d all have flowers, too, so the hotel florist had an extensive business. They had greenhouses out on Long Island where they grew all this stuff, and they’d prepare six or seven hundred of these floral place settings just for a single day.

Hotels today often have their own brand of shampoo, fragrance, even beer, but the Waldorf-Astoria got there first with its own cigar company.

George Boldt owned a tobacco plantation in Cuba, and the cigars were rolled in Tampa and sent north. It was the custom at the time to conclude a fine meal with a fine cigar.

Near the end of the book there’s an amusing shot of Sir Harry’s Bar that looks like the set for a 1970s movie with Jane Fonda and Jack Nicholson. Were any of the images especially hard to track down?

It took two years to demolish the old hotel?

It was a big building that was right in the middle of midtown. They had to take it down very carefully, one floor at a time — first the brickwork, then the inside plastering, then the steel. They couldn’t just mash it down with a ball on the corner of Fifth Avenue and 34th Street.

Besides images of guest rooms, ballrooms, kitchens and lobbies you include photos of hotel patrons and events. Do you have a favorite?

Being a Philadelphia boy, I included a photo of Grace Kelly and Prince Ranier. They made their first public appearance at the Waldorf right after announcing their engagement. Ranier was sponsoring a ball at the hotel, and they did a raffle for a charity where he rolled the drum, and she picked the winning tickets. She ended up awarding a sapphire ring to Senator John F. Kennedy of Massachusetts.

Images used are printed with permission from Waldorf Astoria, by William Alan Morrison. The book is available from the publisher online at www.arcadiapublishing.com or by calling 888-313-2665.

On the Look-out for Eggs During New York’s Big Egg Hunt? Check Out These... Hunting Down the Best Chocolate Easter Eggs at New York City Hotels
Scroll to top