For those who keep track of these things, there are 36 replicas of the Eiffel Tower scattered throughout the world. This summer the number jumps to 37.

Number 37 is spectacular but, alas, temporary, as creations tend to be when they are made from macarons. And unlike Tokyo Tower, the Paris, Texas Eiffel and other towering homages to the 1889 Paris Exposition’s instant icon, the French cookie tower is indoors – in the upper lobby of the Peninsula New York hotel, to be precise.

It is also, of course, edible, though you wouldn’t dare. 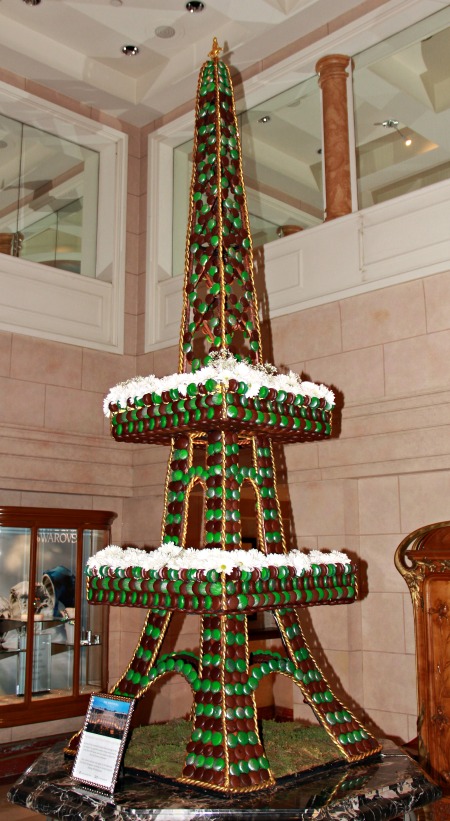 The hotel’s ten-foot tower arrived just in time for Bastille Day on July 14 but was built to herald a different celebration. The Peninsula Paris opens on August 1 in the gracious Haussmanian building, a near- contemporary of the Eiffel Tower within eyeshot of the Arc de Triomphe.

Like Rome, the macaron Eiffel Tower wasn’t built in a day. It took a five chefs, led by executive pastry chef Deden Putra, three days and more than 15 pounds of almond paste, 15 pounds of sugar and 14 quarts of egg whites. “It’s a team effort,” says Putra, a maestro of monumental confectionery art.

The hotel engineering department built the base and illuminated the finished product. The original, after all, is known for its lights.

How many macarons in Peninsula green and brown dress up the New York Eiffel? Stop by and guess. The correct number wins dinner for four at Clement, the hotel’s stylish restaurant.  Paris-on-Fifth-Avenue is on view until the end of August.

A Glamorous Parade of Easter Bonnets — In Chocolate! — At The Peninsula New York
Five New York City Hotels to Check Out Before the Holidays Wind Down
White Chocolate’s Not Just for Eating: Meet The Peninsula New York’s Snowpage Family
Hunting Down the Best Chocolate Easter Eggs at New York City Hotels
10 NYC Hotels to Check Out Before the Holidays Check Out
Are These The Best Hotels in New York in 2012? AAA Thinks So and Rolls Out Its Five Diamond List
6 replies

Teapots from The Plaza, Teaspoons from the Waldorf: Why Collectors Love Hotel... Madeline and the Ritz — How Hotels Influenced the Life and Art of Ludwig...
Scroll to top