He’s a chocolate lover’s dream – a child-size snowman concocted almost entirely from white chocolate (the carrot nose is marzipan). He greets all who enter The Peninsula hotel through early January.

The holidays are an unofficial bake-off between the city’s big hotels. After sitting on the sidelines, the Peninsula entered the fray last year with the arrival of executive pastry chef Deden Putra, a master of monumental confectionery art. 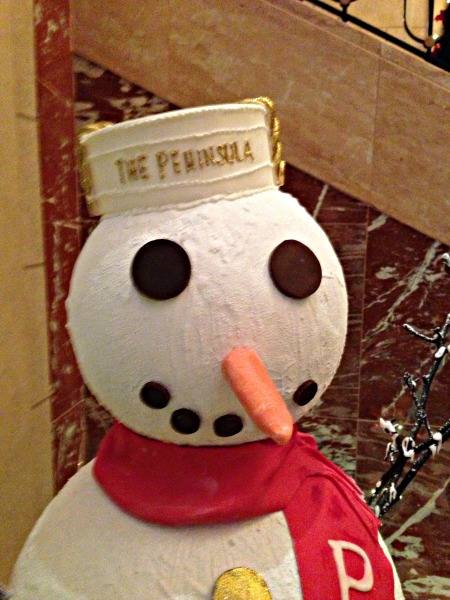 Ready for his close-up: the Peninsula Snow Page

Putra warmed up in 2012 with a pair of super-sized lollipop reindeer, an eye candy tribute to the fairy-lighted reindeer that served as the hotel’s unofficial holiday mascots.

This year, he showcases a year-round Peninsula stalwart, the white-clad pages sporting signature pillbox hats, a look that originated at the hotel’s Hong Kong mother ship.

The inspiration was the hotel’s holiday video in which three Peninsula pages fashion a showman on the roof of the New York hotel and crown him with one of their caps.

For 27 hours spread over three days, Putra and a team of five pastry chefs labored over the snowpage. They brushed tempered white chocolate onto Styrofoam half-spheres layer by layer until it was an inch thick. “That strengthened it,” Putra says. They mated each half with its other half, piled high to create the body. They sprayed everything with white chocolate.

The tree-branch arms are fashioned from dark chocolate modeling paste and wired invisibly onto the body. The scarf was cut from white chocolate paste livened with red food coloring.

And the hat? Sugar pastilage was rolled out, cut to fit a template and left to dry overnight.

Unlike last year, when the team had to remake Rudolf and friend after a strong gust of wind blew into the kitchen and shattered the candy reindeer, there were no mishaps. “That’s what pastry’s all about. Learn from your mistakes,” Putra says.

The big challenge was creating a perfect union when the assembling the two halves of each chocolate-coated sphere.

And the easiest part? “Making him smile,” Putra says.

Where Did Beyonce Check In When She Wanted to Shoot a Sexy Music Video? When “Happy Holidays” Is Just the Starter: Hotel Holiday Decor with...
Scroll to top