Once again The Peninsula New York has proved you don’t have to eat pastry to enjoy it.

The showpiece of the hotel’s wildly decorative holiday lobby is a Snowpage family — roly, poly papa, mama and baby — cooked up from 90 pounds of white chocolate along with fondant (five pounds), sugar (three pounds) and a sprinkling of gold dust. 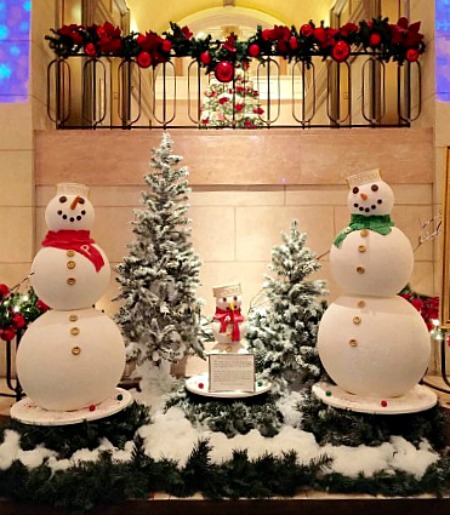 Sporting monogrammed scarves and the jaunty hats of Peninsula pages they’re impossible to miss from the moment you enter the hotel.

It took a team of five pastry wizards led by Executive Pastry Chef Deden Putra five days to fashion the family. Putra divided up his chefs so each snowpage had its own decorators. “That way each one got a distinct personality,” he says.

The two adults differ slightly in size and dress to distinguish mom and dad (mom’s waist is Kim Kardashian slim). As for the little one, the team had to do the baby twice before getting it right. “We originally made the little one bigger, but it wasn’t cute enough,” Putra says. The toddler snowpage now stands just over one foot tall, button cute.

They’re worth a picture. Stop by the hotel, take one and share it on Instagram, Twitter or Facebook tagged #SnowPage. The Peninsula will make a donation to the Make-a-Wish foundation for every photo tagged.

When “Happy Holidays” Is Just the Starter: Hotel Holiday Decor with an Added Message
It’s Spring — in These NYC Hotel Lobbies (Even if it Still Feels Like Winter Outdoors)
Meet the Peninsula New York (Edible Version), the Ultimate Gingerbread Hotel
10 Things to Check Out at NYC Hotels Before the Holidays 2011 End
Holiday Decorations that Look Good Enough to Eat at the Waldorf Astoria Beverly Hills
Jumeirah Essex House Celebrates Easter with Gigantic Faberge Eggs — in Chocolate
0 replies

What You — and Will and Kate — Can Expect When New York Base Camp Is The... So Long, Cafe Edison — Times Square’s Storied Coffee Shop Cooks...
Scroll to top