The New-York Historical Society is a labyrinthine building, but it’s not hard to find Madeline in New York: The Art of Ludwig Bemelmans, on view through October 19. You just follow the mob of kids (and trailing parents) to the enormous rendering of the Bemelmans’ red-headed imp that heralds the show.

This is an unabashedly kid-friendly exhibition. The centerpiece is a big comfy sofa where your five-year-old – or you — can curl up with one of Bemelmans’ iconic picture books. But the unexpected bonus? This is the best museum show about New York City’s hotel world to hit town in a long time. 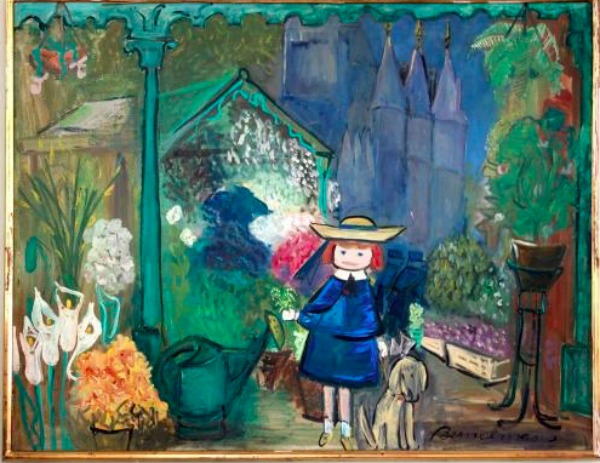 The Austria-born artist is well known for his fanciful New York City murals from 1947 that cloak Bemelmans Bar, the effervescent Upper East Side nightspot at The Carlyle that serves mad-strong drinks. Bemelmans and his family lived at the hotel for a year and a half as payment. (The exhibition displays a tiny hand-painted lampshade loaned by the bar.)

But the hotel business was in Bemelmans’ blood. His father ran a hotel in Gmunden, a picturesque Tyrolean mountain town where Ludwig spent an idyllic childhood that ended abruptly when his father ran off with the French governess (oops).

The boy and his mother retreated, via night train, to her family home in Regensberg, Germany. But when young Ludwig needed a profession, his mother shipped him back to Austria to apprentice in his uncle’s hotels. Alas, all did not go well. Offered the prospect of reform school or the chance to start a new life in America he made the obvious choice and wound up in New York in 1914 at age 16, armed with glowing, if embellished, letters of introduction to three top-notch hotels. After stints as a busboy at The McAlpin and the Hotel Astor, he settled in at the Ritz-Carlton for 15 years. “I learned how to press a duck, open a bottle and put a chair under a lady,” he wrote.

Bemelmans, of course, did not limit his energies to bussing tables. The lively cast of characters passing through the Ritz offered ample inspiration for a budding comic artist with the observational skills and bon vivant inclinations of a Nick Charles. Indeed, the Ritz inspired more writings and drawings than any period of his life his grandson John Bemelmans Marciano writes in Bemelmans, The Art of Madeline’s Creator.

A highlight of the show is Adieu to the Old Ritz, a wall of delightful captioned drawings Bemelmans created for Town & Country upon the demise of the Ritz-Carlton in 1950 (the stately building, designed by Grand Central Station architects Warren and Wetmore in 1911, was sacrificed for an office tower).

Bemelmans went on to write novels, short stories and books for grown-ups as well as children, and even had a story turned into a Hollywood movie – Yolanda and the Thief (1945) starring Fred Astaire.

But his attention never strayed completely from the world of hotels. Hotel Splendide

(1941) is a light-hearted memoir of the Ritz. And in addition to numerous covers for The New Yorker and Town & Country, Bemelmans dreamed up promotional material for hotels, like the jaunty pink 1940 New Year’s Eve menu for the Waldorf-Astoria that’s on view.

“My life as an innkeeper is better than any other,” he wrote during a sporadic burst of affection for his original calling. “At intervals of several years this realization bothers me enough that I put my paints away, cover my typewriter and look for a door through which I can step back into my old profession.”

Of course, if Bemelmans had confined his interests to the hospitality business there would be no exhibition – or Madeline. She turns 75 this year and her plucky personality – presented in paintings, drawings and books — gobbles up two of the show’s three galleries.

Still, you don’t have to look far for a potent, if inadvertent, connection between her and the hotel world. After all, it’s not hard to see her as a sister in spirit to another feisty little girl, also deftly drawn, who lives in a certain grand hotel on Fifth Avenue. Eloise, by the way, turns 60 next year.

The Famous Waldorf Astoria Lobby Clock, Now Marking Time At The New-York Historical Society
What You — and Will and Kate — Can Expect When New York Base Camp Is The…
Ace it! New York's Best Hotels If You're Going to the U.S. Open
A Raid on the Helly Nahmad Gallery at The Carlyle Hotel
The Happiest, Merriest Holiday Decorations at New York City Hotels, 2019 Edition
Composer and Cabaret Artist Jimmy Roberts Performs at the Keyboard in Afterglow Series
9 replies

An Eiffel Tower Made from Macarons: The Peninsula New York Welcomes a Sister... Eat Up: Summer Restaurant Week Is Back In Town
Scroll to top