A neighbor who knows I write about hotels recently invited me to her home. “My mother collected hotel demitasse spoons,” she said.

A Jazz Age actress and flapper, Mom liked to take tea at posh spots like the Ritz Carlton in Boston and New York’s Savoy Plaza. 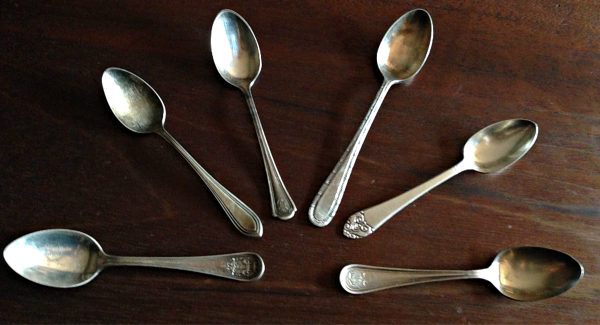 That’s not all she took. Nearly two dozen little spoons gleamed on my neighbor’s dining room table, each embellished with the property’s emblem and engraved with its name. The deeply grooved Aztec curliques crowning her spoon from the original Waldorf=Astoria on Fifth Avenue and 34th Street were particularly fetching.

They don’t make hotel silver like they used to. Which is one reason an ardent band of enthusiasts collects it — and not just those who inherit it from a light-fingered parent with a fondness for tea.

The most desirable examples are in good condition and emblazoned with the property’s initials or crest, preferably a blue chip hotel with extravagant tableware like the Waldorf-Astoria, The Fairmont or, the ultimate collector’s prize, The Plaza.

It’s all about the provenance, says Lynn Goldfinger, a San Francisco antiques dealer whose website Paris Hotel Boutique specializes in hotel silver. A silver-plated coffee pot that’s pretty but anonymous? Ebay sells them for less than $5. But a handsome 1930 silver-plated coffee pot emblazoned with the insignia of the Waldorf-Astoria? One sold recently for $500 on ebay after a bidding war broke out.

We’re discussing tableware, and appearances matter. But the look of the most desirable hotel silver has little in common with what’s sitting on the table in a contemporary boutique hotel. “The goopier, the fussier, the better,” says Goldfinger. That means a rip-roaring demand for 19th- and early-to-mid 20th-century pieces from grand dame hotels in New York, San Francisco and Paris. Goldfinger doesn’t bother stocking silver from English hotels. “Too plain,” she says. 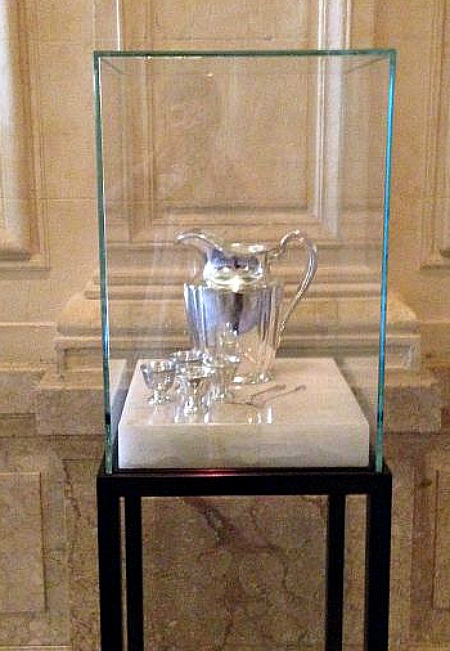 Vintage hotel silver at the Palace Hotel in San Francisco

Since starting her business in 1995, Goldfinger has observed three categories of  collectors. For one group the allure is the silver’s good looks and innumerable varietions. “That’s what appeals to me,” says Goldfinger, who snapped up her first piece – a heavy silver serving dome — almost 20 years ago in a San Francisco antiques shop. “Hotel silver is very beautiful, and I was struck by the different patinas and crests.”

For another group the hotel is the appeal, often because it has a personal meaning. A teapot from San Francisco’s Palace Hotel makes a great gift for parents who spent a honeymoon there. Or perhaps you love seeing Cary Grant stride purposefully through The Plaza in Alfred Hitchcock’s North by Northwest. “I know people who will only collect silver from the Fairmont,” Goldfinger says. Sometimes they just leave the items in the box.

But not those who comprise the third group. These collectors use hotel silver when they entertain. Some even use it every day. “It’s heavier then ordinary silver plate,” Goldfinger points out. The users often have their pieces replated. This is anathema to antiques lovers who see history in every ding. But replating can be a necessity if food is ever to touch a hopelessly tarnished surface. 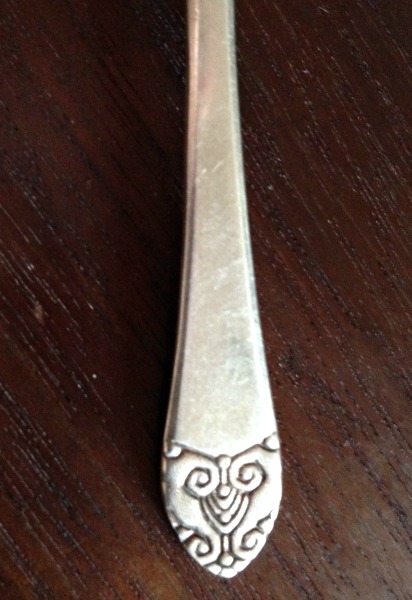 Hotel silver made its debut sometime in the mid 19th century, when the first American hotels with aspirations of grandeur came on the scene. Monogrammed teapots, sugar bowls and table utensils were among the amenities well-heeled guests came to expect at hotel restaurants and banquet halls. “The Americans were emulating the great European hotels,” says hotel historian Mark E. Young, director of the Hotel Industry Archives at the University of Houston, home to the Conrad N. Hilton College of Hotel and Restaurant Management.

advent of silver plating, which fused a silver patina on base metals like brass and copper, made stylish silver tableware an affordable amenity for hotels.

A mid-century tariff on imported European silver proved a game changer for domestic silvermakers. By the turn of the century scores of American manufacturers catered to a flourishing hotel trade.

But were there too many? An article from an 1894 issue of The Hotel Monthly warns hoteliers that silver plated ware is the one commodity that can stump even “a practical hotel man with an acquired knowledge of qualities and values.” Noting that it is impossible to tell the quality of silver plated goods by appearance alone, the article cautions buyers to pay more up front and go with “a reliable concern,” such as Meriden Britannia, Gorham, Reed & Barton, Wallace and International Silver.

From the Waldorf: not all hotel silver is silver

These top-flight makers employed sophisticated manufacturing techniques, like sectional plating. This process deposited additional coats of silver on areas that received excessive use, like the tip of the bowl, bottom of the bowl and upper handle of the spoon.

Hoteliers were admonished to look for silver that displayed “Beauty, Usefulness and Durability.”

And look they did. For decades it was unthinkable that a quality hotel wouldn’t have its own silver.

Consider Statler, the efficiency-minded business chain that set hotel industry standards in the early 20th century. Statler’s bespoke silver was distinguished by a sleek Art Deco “S.” More important, the simple pattern was easy to keep clean. “The view was let the Waldorf or the Pierre have more ornate spoons because they’re going to charge more for banquet rooms, and they can hire the staff to polish the silver,” Young says.

Statler’s “S” spoons, like those at other hotels, served more than soup. They were advertisements for the property, emblems that spread word of the hotel’s quality and good taste in an era before hotel ads appeared in magazines (or fans posted images on Pintrest). When Statler opened a new hotel, they gave away demitasse spoons as souvenirs.

Those cute little spoons, easily tucked into a handbag or pocket, were also ideal for pilfering. Demitasse spoons were widely collected in the first half of the 20th-century, and Young thinks people took hotel spoons simply as souvenirs. “Back in an era when we didn’t travel nearly as much, people could say here’s a demitasse spoon for the Congress Hotel in Chicago. See? I’ve been to Chicago.”

As for the hotels, they didn’t like shrink, but Young believes they saw the public relations value in having their items admired by potential customers and built loss from theft into their budgets.

Of course not all hotel silver that comes on the market today was poached. Hotels auctioned off collections when they remodeled or closed, parked worn out items with silversmiths, sold old objects to dealers and gave pieces to employees. Goldfinger says  if you see a large example of hotel silver, chances are good it left the premises intentionally. “No one walked out with an ice bucket.”

Meet Courtyard Marriott Chelsea — How Select Service Hotel Brands Won Over Manhattan
What Would Conrad Hilton Think of the Waldorf-Astoria’s $1.95 Billion Sale?
The New York Hilton Hits 50, And a Hotel Historian Time Travels Back to Its Early Days
How the Berlin Hilton Became a Stealthy Scene Stealer in the Oscar-Nominated “Bridge of Spies”
14 replies

Another New Trick for Google Glass — Now You Can Use It to Book a Hotel... An Eiffel Tower Made from Macarons: The Peninsula New York Welcomes a Sister...
Scroll to top