Hotel operations are temporarily suspended. The hotel will reopen on October 1.

At a glance: Are these the smallest hotel rooms in town?

And no surprise. This is the Pod 51, not the Plaza, a hotel/hostel mash-up of modestly priced rooms with baths and cheaper rooms with shared baths down the hall.

What makes it different from similar hybrids is its appearance and upkeep: this 1930s brick hotel, formerly the gloomy Pickwick Arms, was cleverly renovated floor-by-floor between 2005 and 2007, retaining the basic footprint from its classy flophouse days but sending it into the 21st century, more or less, with upbeat colors and durable, easy to clean, fashion-forward furnishings. In short, it’s stylish, not scary.

Out went the jangling radiators and light-blocking window air conditioners; in came under-window heating/cooling units. Ditto the antediluvian bathroom fittings; both the shared baths and the in-room baths are clean, freshly tiled, well maintained and smartly fitted with round rain showerheads and stainless steel sinks.

Balancing the teeny rooms are generous, mid-century-mod-inflected public spaces – a bustling lobby with J.M.Rizzi’s cartoony murals, a terrific lounge (sofa, Copenhagen chairs that swivel, refractory table outfitted with outlets for laptops and charters), even a roof deck with faux grass.

The lounge feels like a post-grad dorm common room, in a good way. It’s a congenial hang-out, where you can meet up with friends, check your email, bring in a pizza or curl up in a corner with a book. In good weather, it opens onto a deck, brightened by a Rizzi mural painted onto an adjoining building.

From my perch in a Copenhagen chair, I chatted with a trio of modern dancers, helped a backpacking New England couple with directions and watched a school group from Germany meet up in the morning before setting out for the day. My favorite detail: the wall-mounted touch-screen map of New York City. I like the sassy palette of primary hues, too.

There’s always a caveat with budget hotels and with the Pod it’s the price. In the best of times, most rooms are under $100. But prices can shoot up into the $170-$190 range with demand. And that’s before taxes.

Rooms: Yes, they’re super small. (With a full bed and a bath, my double was one of the big ones.) But with smart built-ins that evoked a snug ship’s cabin and top-notch tech like iHome radio/alarms, my little cell proved upbeat and clever, more jazzy/monastic than claustrophobic.

Set lengthwise against the wall and backed with cushions that matched the bedspread, the full platform bed looked like a daybed and could probably sleep two people who were a) thin and b) turned in unison.

For added daylight, I opened the top portion of the blond wood shutters (my room faced a boring apartment building for a Rear Window effect). A heater-A/C unit fronted by blonde wood stood below. Slim built-in tables flanked the bed, which had three generous storage drawers beneath.

Lined up opposite the bed were a narrow, doorless closet with polished metal hangers and a wall safe, a stainless steel sink with a mirror above and shelves below (towels, hair dryer, tissue) and a glass-fronted stall shower and toilet, backed by white subway tiles. A door slid between the two affording privacy for one or the other.

A red and black bedspread(!) fit tightly over the bed. More successful was the lighting: metal reading lights over the bed, a spotlight over the sink, round wall lights on a dimmer in the toilet and shower area and a ceiling fluorescent on a dimmer. Decent mattress, btw.

Shared bath alert: The shared baths I saw were clean, relatively roomy and neither gross nor scary. The bathrooms are lined in white stone that looks almost like marble. And several are on each floor.

Food and drink: There’s an indoor and outdoor cafe in the hotel — and a Coke machine in the lobby. For something fancier, Le Bateau Ivre, a stylish wine bistro, is on the hotel’s ground floor, keeps agreeable hours (it serves until 4 am), offers over 250 (!) different wines and feels very French. It’s also pricey (by Pod standards). That said, I enjoyed my hamburger (made with Dartagnan beef) and frites, a delicious Medoc and an espresso that tasted like Paris.

Restaurants in the area tend to be costly, but Starbucks is nearby. And delis and diners can be found on Second Avenue. The concierge can suggest affordable restaurants in hipper neighborhoods.

Amenities: Free WiFi, small flatpanel wall-mounted TVs, iHome radio/alarm clocks, Pod bath products. The Pod Culture Forum, an online site, allows guests to log in and contact one another before and during a stay. As mentioned above, there’s a concierge, not always found at budget hotels.

Surroundings: As midtown east is neither inexpensive nor hip, it’s an odd locale for a style-conscious budget hotel like the Pod. But with subway stops just two blocks away and buses even closer, it’s easy to go wherever you want. And if you’re interested in midtown, attractions like Rockefeller Center, Fifth Avenue shopping, the Museum of Modern Art, the Paley Center for Broadcasting and Television, Central Park and even the United Nations are walkable (if you like walking). The East Village and Alphabet City are a straight shot downtown on the subway. And Brooklyn attractions like DUMBO, Bargemusic, St. Ann’s Warehouse and the Brooklyn Academy of Music are reached easily by subway.

Back story: Originally known as the Pickwick Arms, the 13-story brick hotel opened in 1930 as a transient and residential hotel outfitted with 367 little rooms with shared bathrooms down the hall. When owners Ira Drukier and Richard Born renovated in the mid 2000s, they had a choice. Reconfigure the rooms to add bathrooms and charge upwards of $200 a night. Or keep the basic footprint, refurbish what they had, including those shared baths, and charge much less.

With a paucity of agreeable budget lodging available, the concept for the Pod, a modest hotel a step up from a hostel or YMCA, was born. “We get Europeans and young backpackers who think a shared bath is no big deal,” Drukier told The New York Times. He and Born, who own more than 20 hotels, including the upscale Chambers, Mercer and Blakely, chose moderately high-end trappings for the little rooms, like iHome radio/alarm clocks, and recruited veteran hotel decorator Vanessa Guilford to fashion a stylish interior that would incorporate easy-to-clean materials that would resist damage.

As is often the case when SRO, or single room occupancy, hotels become commercial, some permanent residents remained. But since the hotel’s transformation, begun with a floor-to-floor renovation in 2005 and completed in 2007 with the transformation of the lobby and roof, the number has dropped. (It was originally 32.)

Keep in mind: Hallways are narrow. Sounds of elevator bells, hallway voices, slamming doors and the vacuum cleaner came through walls loud and clear. I was initially given a room missing the cushions behind the bed and with a stain on the bedspread; after requesting a different room I was reassigned a stain-free room with nary a hitch. One of the three elevators was stuck on a floor for what seemed ages during my stay. 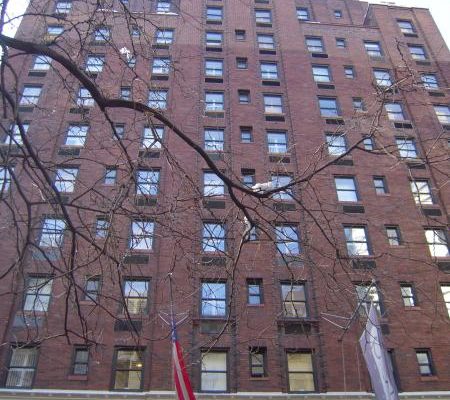 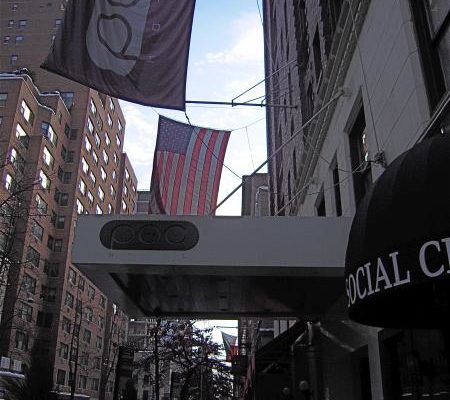 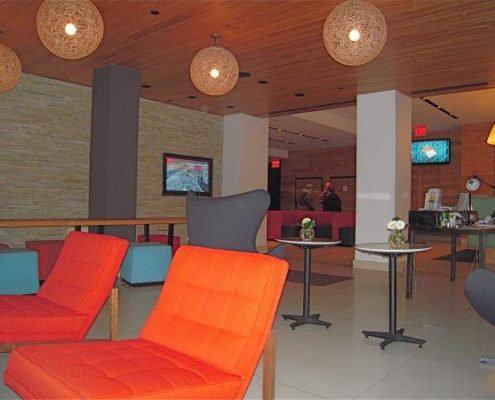 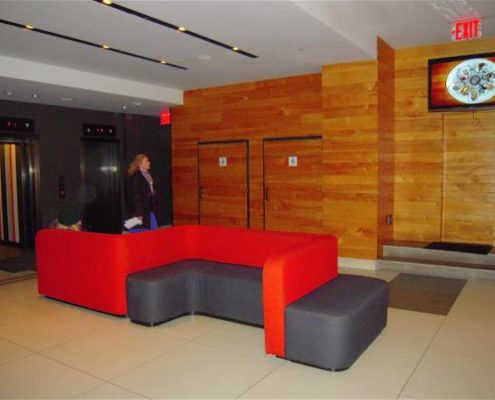 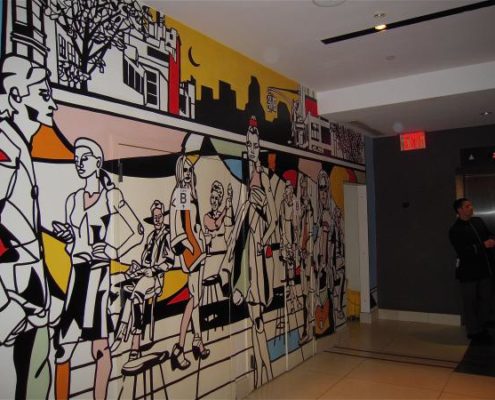 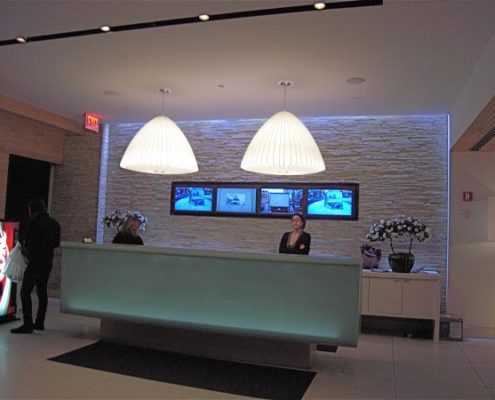 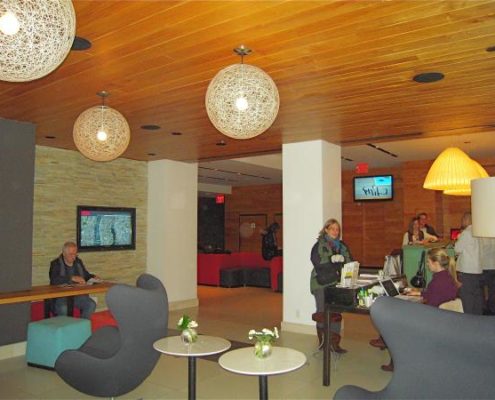 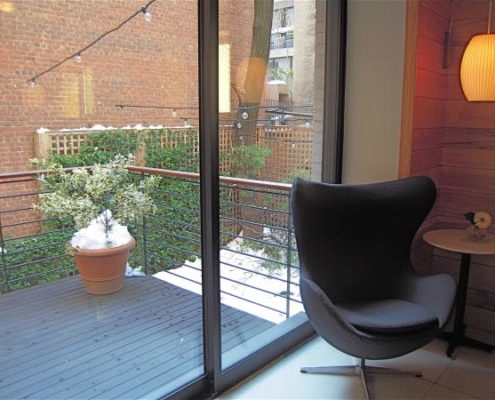 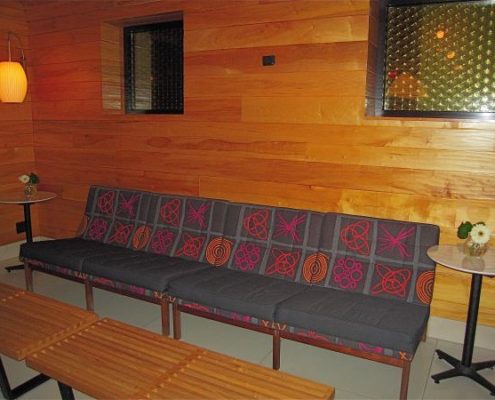 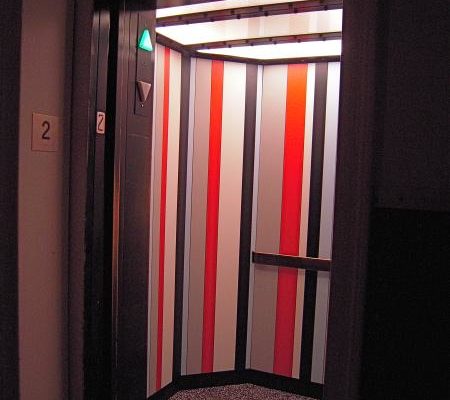 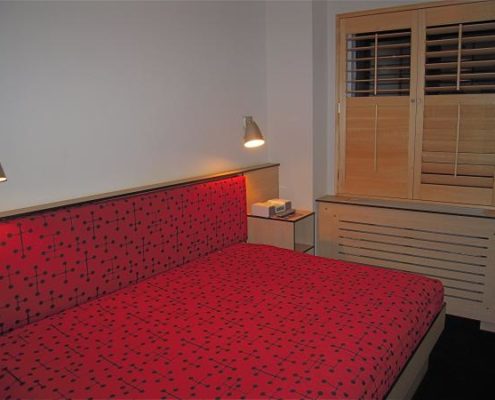 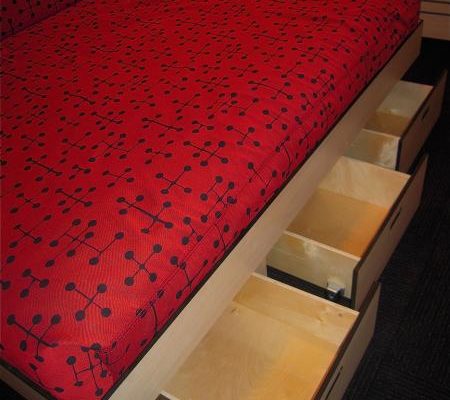 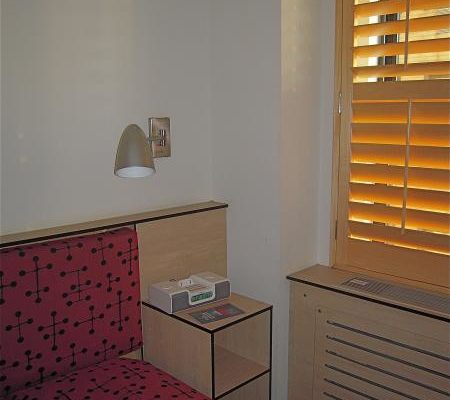 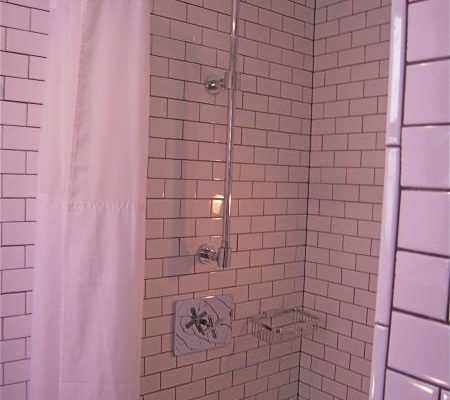 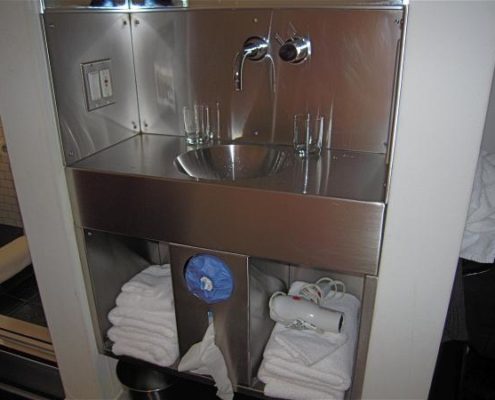 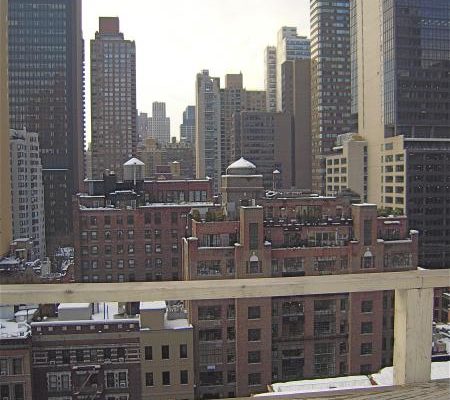