At a glance: When the Bryant Park hotel opened in 2001, Conde Nast was housed in a nearby skyscraper and Fashion Week unfurled in tents across the street in Bryant Park twice a year. With the Garment District nearby the area was Fashion Central, and the  hotel fit right in.

The Bryant Park is still chic and stylish, even if much of New York’s fashion world has migrated downtown. The runway-handsome porters manning the heavy brass and glass doors wear black. Check-in occurs at a lipstick-red lacquer counter parked in front of a matching leather wall. And though the lobby’s dark, wood-paneled sitting area is no bigger than, well, a lipstick, the two armless leather loveseats are undeniably chic (dressed in the house red, naturally).

The exterior is just as delectable: The hotel occupies the American Standard Building, a magnificent black brick Gothic skyscraper as tall and sleek as a supermodel – and immortalized by Georgia O’Keeffe in her 1927 painting “The Radiator Building at Night.”

The lobby is so lush I’d prefer more places to sit, the better to watch the parade of stylish guests or drink in the view of the park. Better still, how about a sitting room to replace the top floor meeting space? (The spectacular views are by invitation only). Still, there’s plenty of seating in Koi, the sleek, snooty outpost of the L.A. Asian-fusion restaurant adjoining the hotel. And the Cellar Bar, a glamorous basement lair, pulsates late into the night, albeit for the price of dinner or a drink.

Rooms: They’re chic, minimal and surprisingly large. The standard room I saw, plenty big for two people, was a stark, spotless white envelope with a black metal-frame queen-size bed garbed in white sheets and perched on legs, so you could see beneath. The aubergine leather headboard matched the leather bolster running the width of the bed. I liked the upholstered chair/bench and little table in front of the window, overlooking a cityscape and shielded by white floor-to-ceiling curtains. Besides a closet big enough to hold the fruits of a Manhattan shopping spree, a second closet contained the minibar and “romance accessories,” as the assorted condoms and whatnot were described to me, and an LG flat-panel TV hung on the wall.

The large stone and white bathroom sported a glassed-in stall shower (tub/shower combos are also available), a contemporary rectangular pedestal sink that would look comfortable in a Japanese aparto and Molton Brown toiletries.

Food and drink: Koi, a stylish, pricey Japanese restaurant feels Downtown and serves lunch and dinner in a cavernous, glamorous lair punctuated by dark wood walls and a sleek openwork white ceramic ceiling. There’s almost no upholstery, and the room shrieks (on my first visit, a friend insisted we leave before being seated because she couldn’t stand the din). I returned another day without her — the noise, slightly tuned down, didn’t bother me and the heartier friend I recruited — and tucked into a lunch of tofu with vegetables in a ginger sauce (delicious) and iced tea (weak). Unlike the hotel, where the staff seems eager to please, service in the restaurant was cool and indifferent.

In fall 2017, the Célon Cocktail Bar & Lounge, a spacious Moroccan-inflected lair, opened in the spot previous occupied by The Cellar. Open at night for craft cocktails that include a $100 martini and Mediterranean bar snacks, Célon has an exotic vibe and a gorgeous tile ceiling reminiscent of the Oyster Bar and can get crowded.

Amenities: You need to show your key to a porter to use the elevator to get upstairs (most of the time). The fitness center is clean and well equipped with cardio machines and free weights. Screening room in the basement (alas, it’s only open for private screenings).

Surroundings: A superb Midtown location, equidistant between Times Square and the Theater District, and Grand Central Terminal. The New York Public Library and Bryant Park (ice skating in the winter, outdoor movies in the summer, a merry-go-round year round) are across the street. Fifth Avenue shops, the Museum of Modern Art, Rockefeller Center, the Empire State Building, the Morgan Library & Museum and several multiplex movie theaters are a walk – or cab ride — away. Bus stops and subway stations are even closer.

Back story: The Bryant Park Hotel building started life in 1924 as the offices of the American Radiator and Standard Sanitary Company, a heating manufacturer. For their new tower holding offices and a showroom, the company looked inward and tapped Raymond Hood, a radiator cover designer. Though inexperienced as a building architect, he understood the company and his assignment. To impart heft and solidity to the narrow, 21-story building he chose black bricks, which also symbolized coal, and trimmed them with gold, embodying fire. Carved allegories depicting the transformation of matter into energy punctuate the exterior (the building housed a heating company, after all). Additionally, the Gothic structure features a cutting-edge set-back design, with parts of the building recessed to make this relatively small structure appear taller. Hood went on to design the Chicago Tribune Building and the massive GE Tower in Rockefeller Center.

The radiator company eventually became American Standard, reflected in the building’s name change. On the National Register of Historic Places site 1980, the was sold to the hotel’s developers in 1998. With a renovation designed by British architect David Chipperfield, the Bryant Park Hotel opened in 2001.

Keep in mind: For a high-end hotel, there’s not much public space that isn’t a restaurant or bar. 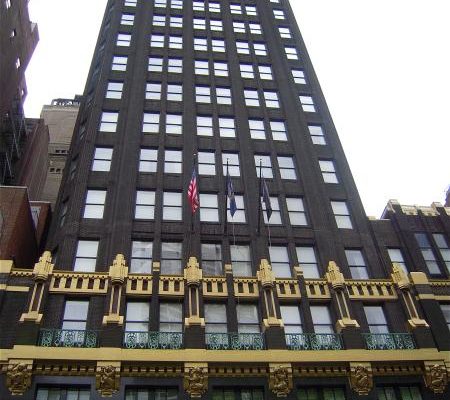 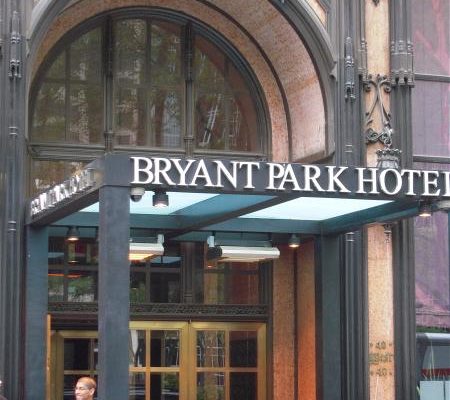 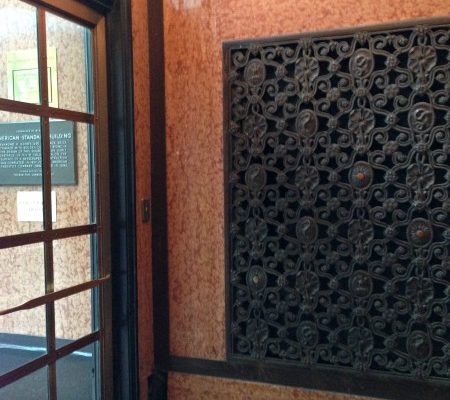 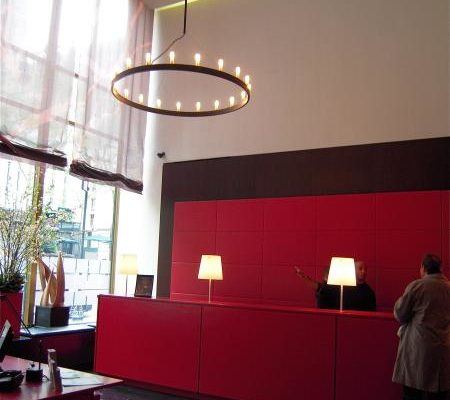 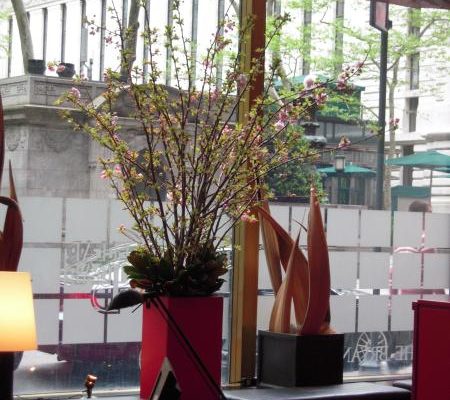 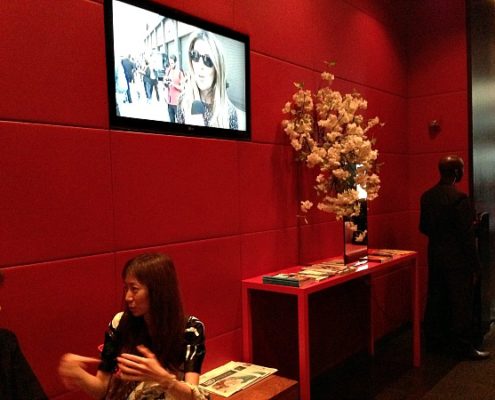 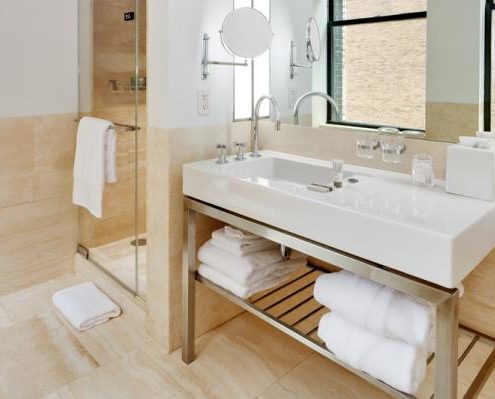 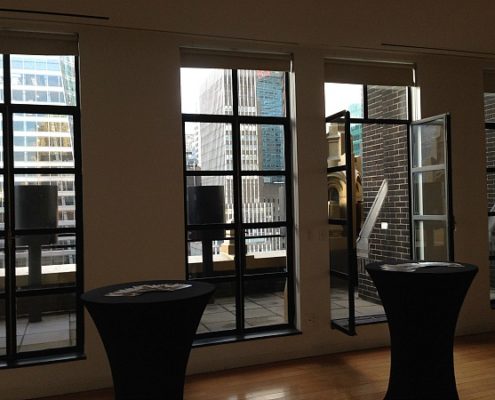 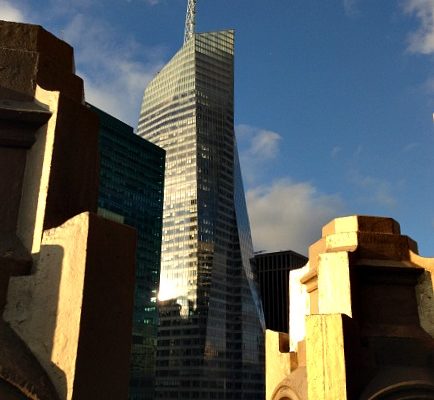 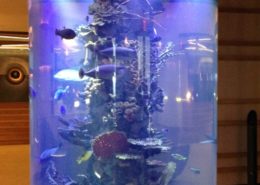 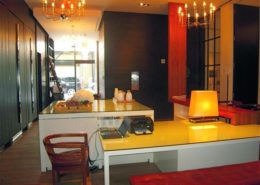