In what seems the latest pop video must-have (see Taylor Swift: “Bad Blood”), Madonna calls in some favors and stocks “Bitch I’m Madonna,” her loopy new vid, with enough famous faces to fill an issue of Entertainment Weekly (or the next Grammy Awards). Nicki Minaj, Beyoncé, Katy Perry, Kanye West, Rita Ora, Diplo, Alexander Wang and Chris Rock pop up along with Madonna’s sons Ricco and David, but they’re just the warm ups. The Standard Hotel at the High Line snaps up the biggest cameo as the backdrop for Madonna’s 4-minute-2-second party. 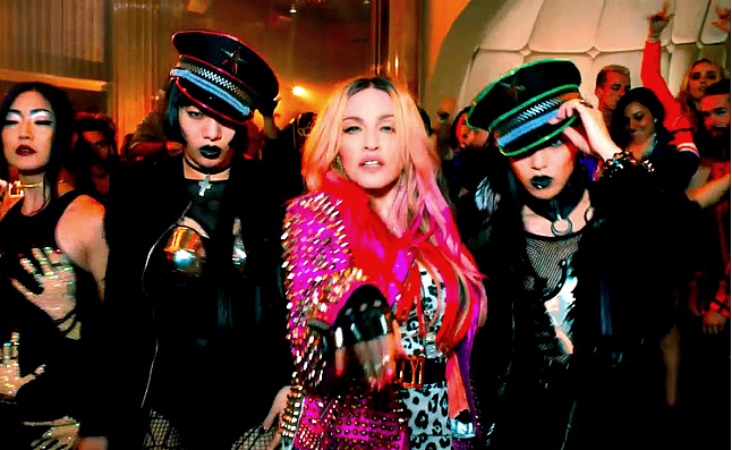 The action unfurls on the hotel’s top three floors, where a gap-toothed Madonna, flaunting pink extensions and a newly thin face and twerking in a white leopard mini-dress, rips past halls emblazoned with horizontal stripes, an artfully muralled stairwell and those infamous, show-everything windows, curtain-free.

The party winds up on the roof, overlooking the Hudson River and Whitney Museum of American Art if you want to get technical, though all you see is the night and the lights.

Beyoncé, of course, knows the Standard well (and not just from the night of the infamous elevator knockdown between sister Solange and husband Jay Z). Sporting black lace, she filmed “Rocket,” a sexy black-and-white video from her 2013 album Beyoncé, in a Standard guest room, curtains drawn. This time, she joins the party voguing in a glamorous snippet that could have been shot somewhere else (and probably was). And why not? She’s been here before. But clever of Madonna to ask her back.

Where Did Beyonce Check In When She Wanted to Shoot a Sexy Music Video?
10 NYC Hotels to Check Out Before the Holidays Check Out
And The Oscar Goes To: NYC Hotels with Supporting Roles In the 2014 Academy Awards
Are Those Vitamins In the Minibar at The Standard?
Five New York City Hotels to Check Out Before the Holidays Wind Down
A Scary Summer Sculpture Checks In at The Standard
1 reply