For two hours late Monday afternoon the ballroom at the Pierre Hotel was transformed into Versailles, or Versailles as dreamed up by designer Stacey Benedet for her alice + olivia Spring 2015 collection. 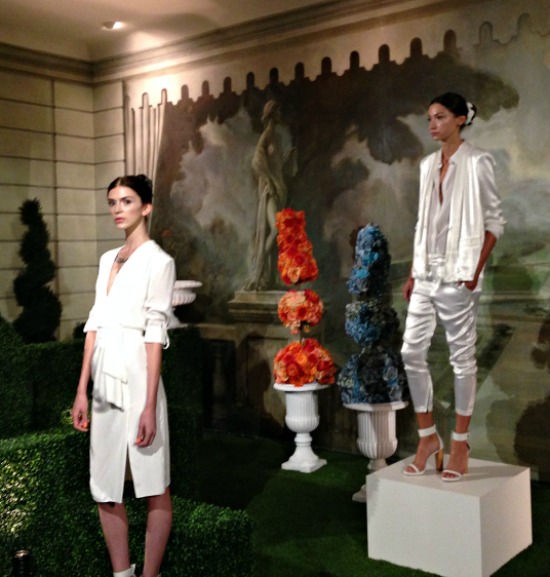 Fashion in the Versailles garden room

You noticed the clothes, but the Pintrest-perfect setting trumped anything Benedet might have found had she shown in one of the efficient but chilly settings at Fashion Week’s Lincoln Center home base or at a hip Downtown space like Milk Studio.

Commenting on Benedet’s 39 designs on view, wildly prolific by any measure, style.com blogger Lauren Sherman wrote, “You could forgive her for being overzealous, given the marvelous venue.” 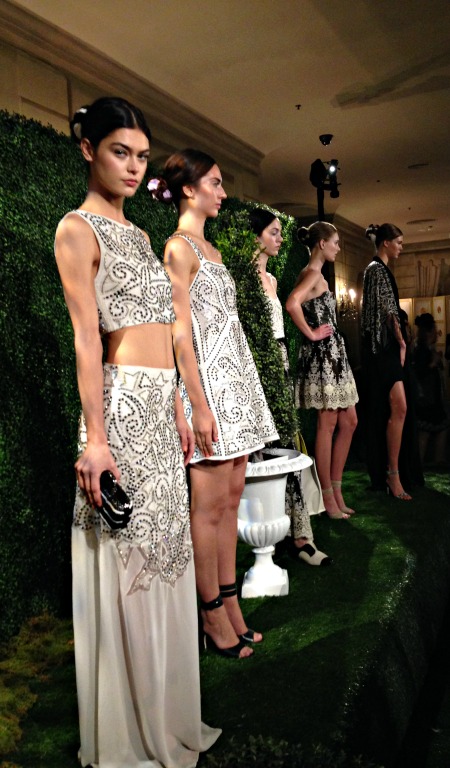 Much has been written about New York Fashion Week’s migration from the Lincoln Center tents, a trend for several seasons. Or as New York Times runway reporter Matthew Schneier put it, “Things fall apart. The Lincoln Center cannot hold.”

But hotels are a big beneficiary of this season’s designer diaspora. Chic ones.

Hotels have hosted Fashion Week events, like private parties, trunk shows and themed drinks, for years. But I counted 25 shows at nine hotels this time, an unprecedented total. Meanwhile, Lincoln Center hosted 70 shows (78 if you count its satellite space the Hub, which happens to be the Hudson hotel), down from 89 in 2010.

Fashion shows can unfold anywhere, of course. Witness this season’s runway events at Riverside Church and the New Museum. But the hotel tally remains impressive. 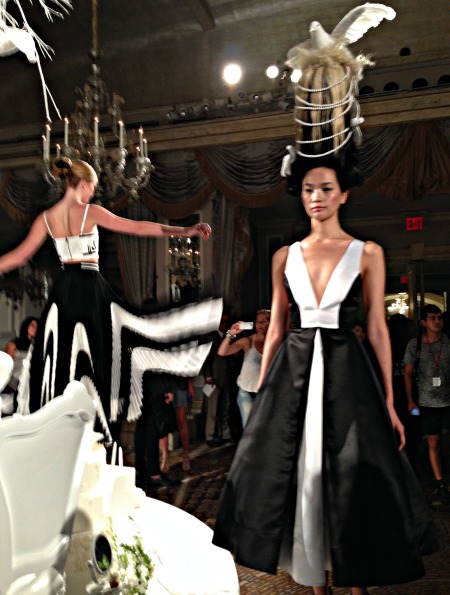 The Fashion Week sanctioned Hudson led the pack with eight shows. Long-time #NYFW favorite the Standard New York High Line and the year-old Highline Hotel, gifted with a medieval wood-paneled refectory that looks like Hogwarts, followed hosting five shows apiece including Rubin & Chapelle at the Standard and Katie Gallagher at the High Line. The boho-hip Bowery, the Downtown-stylish SoHo Grand and the elegant Pierre hosted one show each — Rodebjer, Rachel Zoe andalice+olivia, respectively.

New this year were the Refinery Hotel’s shadow-of-the-Empire State Building roof bar, a shoutout to the Garment District from designer Anna Yee, and the Mondrian SoHo’s atmospheric roof, home to designer Valentina Kova’s show. Meanwhile, designer Veronica Beard landed the distinction of being first to show at the Park Hyatt, the towering 57th-Street luxury spike, less than a month after its opening. 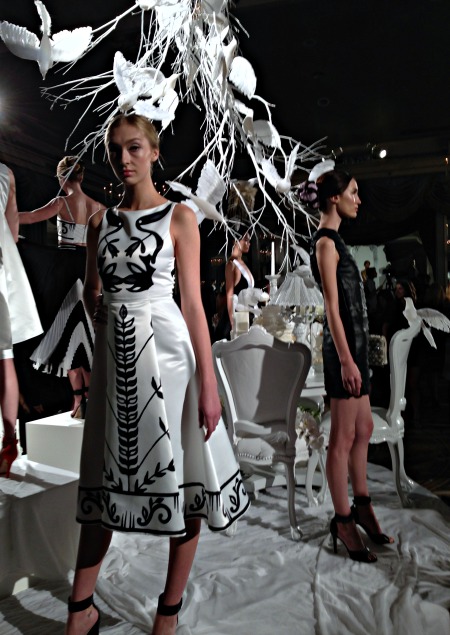 In black and white

Why hotels? Ambience is one reason (see alice+olivia). Hotels with distinctive looks and personalities not only create an eye-catching showcase for the clothes but can amplify the ideas behind the fashions or drive home a theme. Magic can rub off from a hotel that’s a trendsetter, like the Standard, the highest form of guilt by association. Choosing a new, high-profile hotel like the Park Hyatt heaps instant attention on any designer.

From a practical standpoint, hotels are practiced at staging events and handling large groups. They have restaurants and bars. They don’t run out of chairs. A hotel that knows how to put on a wedding, throw a cocktail party, choreograph a benefit banquet and deal with high-strung celebrities and business titans should have no trouble overseeing a fashion show. #NYFW doesn’t move into its new home until the end of 2016. My take? Expect to see more fashion shows at hotels in February 2015 when the Winter 2015 Collections hit the runways.

And The Oscar Goes To: NYC Hotels with Supporting Roles In the 2014 Academy Awards
Introducing Hudson Brooklyn, New York’s Newest Organic Everything Hotel!
Want to Pay $100 for a New York City Hotel Room?
Are Those Vitamins In the Minibar at The Standard?
Only the Photos Remain: the True Blue Lobby of the Mondrian SoHo
NYC Hotels to Check Out – or Into – for The Fourth of July
0 replies

Serving Up An Edible — and Visual — Taste of Fashion Week at The... On Their Toes: The Joffrey Ballet Offers Tips on Grace and Poise to Staffers...
Scroll to top