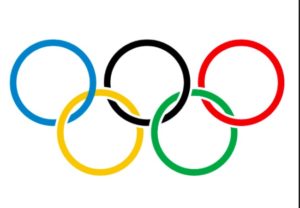 We love the Olympics regardless of where they occur, but we’re especially jazzed that they’re in London this year. As the capital city of a country steeped in theater – Shakespeare, anyone? — London knows how to put on a show, with royals and rock stars to boot. So bring it on!

Most New York hotels will tune their bar TVs to Olympic events, including the Ritz Carlton New York Battery Park, the Warwick New York and the Marriott New York Downtown (16 screens and counting so you can watch the Mets or Yankees when you’ve OD’d on wrestling).

But a handful are going for the gold with special screens, drinks and meals. Here a sampling of what we found.

Want a semblance of reality for open-air events like track and field? The Standard Hotel Biergarten doesn’t feel like a stadium, but it’s undeniably outdoors, tucked under the High Line (just follow the smell of beer).  Beginning with the opening ceremony July 27, a big screen set up in the brick-lined space shows prime-time events for all 17 days. Besides brews, the garten features traditional German fare including sausages and pretzels. And if the games lag, there’s beer pong.

Can’t fly to London? Make due with Eventi Hotel’s 35-foot-wide outdoor screen – and a slew of free outdoor events in the sprawling plaza behind the hotel. Things get rolling July 27 with the opening ceremony, topped up in the plaza by games like tug-of-war and horseshoes. Sip a Greg Louganis Springboard, aka gin and tonic, and nibble Olympic onion rings (you get five).  Opening night also includes a Beer Olympics – beer pong, beer slides, arm wrestling, you get the idea. The hotel will screen “the best of the best” events according to its Facebook page, during all 17 days of the games, then throw another outdoor party for the closing ceremony. If you prefer to watch the games indoors, Humphrey, the Eventi’s new locally sourced American restaurant, has tables looking onto the screen.

From July 17 to August 12 the restaurant at the Fitzpatrick Manhattan serves up breakfast of champions —  three morning Olympic Specials. The Gold Medal features steak and eggs (a 7 oz grilled sirloin topped with mushrooms) and hash browns ($23). Silver dollar pancakes splashed with berry compote and served with bacon, sausage or fresh fruit score a Silver Medal ($17). And the Bronze Medal goes to a fruit smoothie and granola parfait ($11). The hotel streams the games live from 7 a.m. in the adjoining bar where they’re shown all day and into the night (and where beer and specialty cocktails flow, including a melon martini and cucumber lemonade — with kick).

You’d expect something splashy from a hotel with a name like London NYC. And you’d be right. The aptly named London Bar goes all out with an Olympic cocktail, and for those wanting to stay in prime athletic shape, an Olympic mocktail. Sample them mixed by experts at the hotel’s gleaming bar. Or try them at home when you settle in to watch the big show.

A dash of lemon juice

Shake and pour in to a martini glass

Top off with champagne and a bay leaf

A dash of lemon juice

A sprinkle of Wakaya ginger powder and Agave

Shake and pour over ice in a tall glass

The Cheeriest Holiday Decorations at New York City Hotels, 2018 Edition
New York Hotels Where You Can Watch the 2014 Winter Olympics in Comfort and Style
How Have NYC Hotels Weathered the Horrors of Hurricane Sandy?
What AreThe Best New York Hotel Bars for Watching Super Bowl XLVII?
Redirecting Hello Kitty: Macy’s Thanksgiving Day Parade Gets a New Route for 2012
Hotel Bars Where You Can Cheer the Super Bowl (and the Giants)
2 replies

Meet “Big Kastenmann” aka “Big Box Man,” The Standard... The Peninsula New York Launches a Summer Festival of French Movies on its Roof...
Scroll to top