If anyone deserves a comfy bed and a welcoming room after a grueling day at work, it’s the doctors, nurses and other medical personnel caring for Covid-19 patients at New York City hospitals. The deadly virus has also created a need for facilities for non-critical patients and personnel. 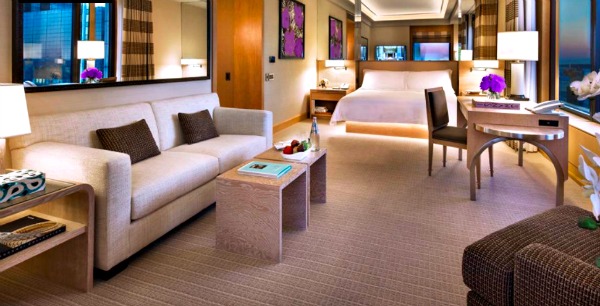 First out of the gate on March 25 was Four Seasons New York, the majestic 57th Street tower owned by Ty Warner, the billionaire investor and founder of Beanie Babies. “Our health care workers are working tirelessly on the front lines of this crisis,” Warner said in a statement. “Many of those working in New York City have to travel long distances to and from their homes after putting in 18-hour days. They need a place close to work where they can rest and regenerate.”

In an Instagram thank you, Cuomo declared the Four Seasons to be “the first of many hotels we hope will make their rooms available.”

Sure enough, in the ensuing days Room Mate Grace, a plucky Times Square boutique with a swimming pool in the lobby, and the Wythe, a hip Brooklyn boutique, joined Cuomo’s list of hotels offering free rooms for medical personnel. The Plaza and The St. Regis New York, two velvety Fifth Avenue luxury properties, and Yotel Times Square, the cool budget hotel with a luggage robot, were listed as offering facilities for non-critical patients and health care personnel. Among those missing from the lists: Trump International Hotel & Tower.

But while the Four Seasons trumpeted their donation on Instagram and over assorted news media, the rest of the pack has been quiet. Our guess is that plans have not yet been finalized for the remaining hotels. The St. Regis issued a statement saying the hotel was collaborating with the governor’s office on “process and considerations for medical staff to take advantage of the availability of this space.” A spokesperson for the Wythe said they were unable able to comment at this time. And a spokesperson for Room Mate Hotels confirmed that company president Kike Sarasola had indeed offered free rooms for medical personnel but had no additional details to share at this time. We haven’t heard back from the other properties, but we’ll post updates.

Still Shopping? Check Out Overnight New York's Second Annual Last-Minute Hotel Holiday Gift Guide
Meet Tingo -- The New Online Booking Site with the Amusing Name
10 Things to Check Out at NYC Hotels Before the Holidays 2011 End
Eight New York Hotels That Know How to Dress for the Holidays
Are iPads The Next New "It" Item at Hotels? The Morgans Group Thinks So
Eat Yo Brunch -- Yotel's Hip Take on the Classic Hotel Sunday Brunch
0 replies

A Starring Role For Brooklyn’s William Vale Hotel in Ailey II’s... Covid-19 Closing: So Long to the Maxwell — and the Very First W Hotel
Scroll to top