Touring is a big part of the job for members of Ailey II, the ebullient company of next generation modern dancers affiliated with Alvin Ailey American Dance Theater. Tuskegee, Alabama; Oklahoma City, Oklahoma and Bonn, Germany are just a few of the 13 international cities the 12-person troupe has visited already this year.

So we think it’s inspired that the company chose a hotel — the Brooklyn-cool William Vale, no less — as a backdrop for the new video promoting their upcoming New York season at Ailey Citicorp Theater, which was to open on March 25 but may be rescheduled for later in the spring. 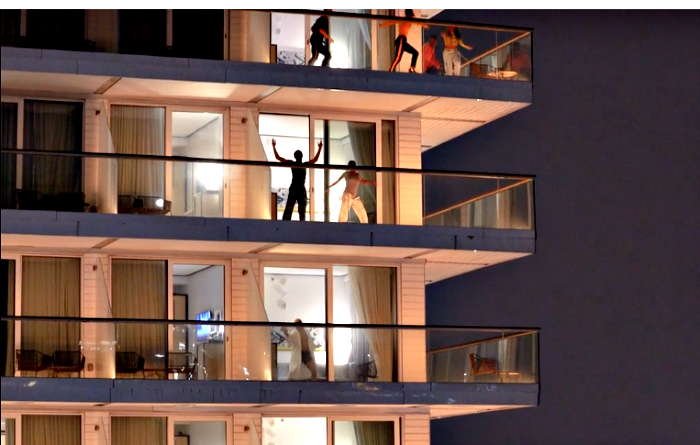 Directed by Redha Medjellekh, founder of Red Is Dancing, a Paris-based agency known for their vibrant dance videos, Ailey II X William Vale offers playful, head-spinning views of four corner suites on high floors, inside and out. Filmed on a clear winter night, each room showcases a different cast of dancers, a different range of moods and a wrap-around balcony. A lot can happen in a minute and 19 seconds, as the Ailey II dancers demonstrate to a pulsating soundtrack by StormZ. As of this writing, the video has had more than 11,000 views on Instagram. You can see it here.

Opened in 2016, the William Vale is 23 stories tall, a bonafide skyscraper for this corner of Williamsburg. Unlike most hotel towers, the William Vale’s 10 floors of guest rooms are perched atop office space instead of the other way around, affording hotel guests the money views. As befits a contemporary building, room decor is futuristic and clever with mid-century mod inflections, bold colors and contemporary art. (We love the changing shows of video art in the lobby.) Though standard rooms can be snug, the suites are roomy. Best of all, each of the 183 rooms has a balcony.

How did Medjellekh manage to film much of the video from the hotel exterior?

He used — what else? — a drone camera. The beauty of the guest rooms and the building’s sculptural exterior, not to mention the talents of Ailey II, inspired Medjellekh to use a drone camera for the first time, we’re told. Given the result, our guess is this won’t be the last.

What more? Here’s our review of the William Vale.

No Room in the Inn? Why Brooklyn Lost the 2016 Democratic Convention
0 replies