Only one New York City hotel is in the running for reflected glory when the 93rd Academy Awards air on Sunday, April 25, and it’s on screen for less than five minutes. But the scene filmed in a suite at The Mark won instant notoriety when Borat Subsequent Moviefilm, Sacha Baron Cohen’s cheeky mockumentary, debuted in October. It wasn’t for the interior design.

In the scene, an unwitting Rudolf Guiliani gets punked during an interview with a journalist who is in fact Borat’s teenage daughter Tutar pretending to be a TV reporter, portrayed by Bulgarian actress Maria Bakalova. After a few fumbling questions, Bakalova — dressed like Kayleigh McEnany and so pitch perfect she’s nominated for Best Supporting Actress — leads the former mayor to the bedroom, where he leans back on the bed and reaches into his pants. (He was removing his microphone and tucking his his shirt, he later explained.) 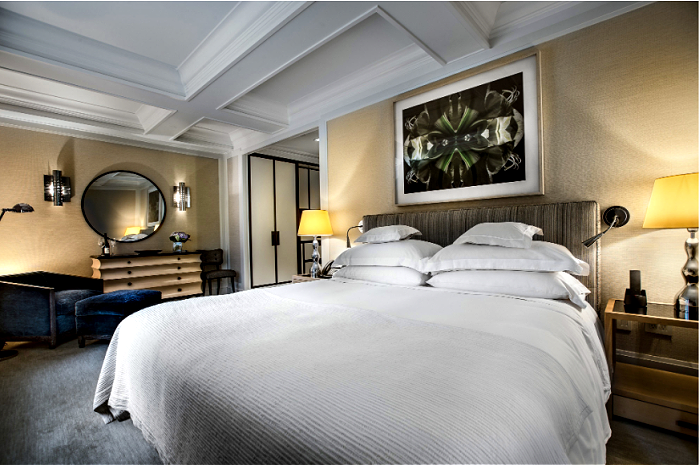 News of The Mark’s upcoming supporting role was revealed last summer when the New York Post reported that Giuliani called NYPD when he sensed something off kilter during what he believed to be a “serious interview” at the hotel. (The subtle giveaway was Cohen, as Borat, bursting into the room wearing a frilly pink corset and yelling, “She’s 15. She’s too old for you.”) No arrests were made.

There’s no mention of The Mark anywhere in the film, including in the credits. And even seasoned regulars may not recognize what appears to be the hotel’s sybaritic, $2,555-a-night Madison Suite  thanks to the movie’s unflattering lighting, reminiscent of a vintage soviet documentary. Only the crisp, coffered ceilings and curvaceous silver lamp bases hint that Jacques Grange, a favorite of Princess Caroline of Monaco and Valentino, had a hand in the suite’s design.

As for the businesslike lobby and boxy, white tower seen at the beginning of the scene and captioned “Manhattan New York,” you won’t see them on Madison and East 77th Street. They were shot at the suite-free Westin Jersey City Newport, a chain hotel near Newark Airport where king bed rooms cost $185 a night. 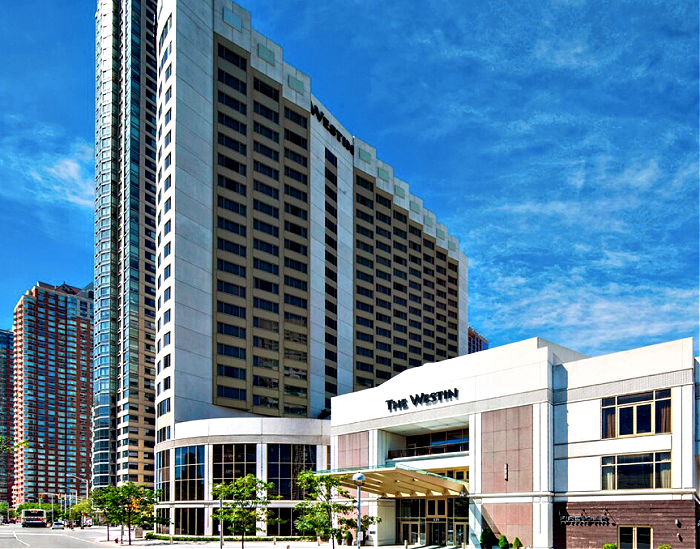 Not The Mark: the Westin Jersey City Newport

We can think of any number of reasons why The Mark was chosen for Borat’s showcase prank. Starting at 850 square feet, any of The Mark’s suites would be sufficiently spacious to house film equipment, a camera crew and the principal players without raising suspicions. Booking the interview at The Mark, aka “NYC’s most boldly lavish hotel,” as it likes to call itself, leant an aura of luxury and legitimacy to the endeavor (if it was good enough for Meghan Markle’s baby shower, it’s good enough for Trump’s personal lawyer). Bonus: The Mark is a short hop from Giuliani’s Upper East Side residence.

There’s also the practical element: The Mark was open for business when Borat was filmed, unlike nearly every other luxury hotel in Covid-summer New York.

From Belle Epoch to Disco — How The Plaza Dressed Up for the 70s in “American Hustle”
Coming Soon: New Owners for The Plaza Hotel; What Will They Get for $600 Million?
Scones, Sandwiches and Lapsang Souchong: Afternoon Teas Worth Taking at NYC Hotels
New York Hotels Where F. Scott Fitzgerald Played and the Real Jay Gatsby Lived
Fresh Flowers — The Ultimate Hotel Freebie For All — At The Plaza
Now Playing at the Crosby Street: A Hip Sunday Night Film Club at a SoHo Hotel
0 replies