For the first time in over three decades, the Academy Awards won’t have a host when ABC broadcasts the show this Sunday, February 24 at 8 p.m. Sounds like anything can happen. What better time to drink in the annual display of theatrics, tears and dresses with cocktails and a crowd?

These New York hotel bars are serving up drinks, big screens, a party atmosphere, even prizes. Popcorn, too, if you’re lucky. 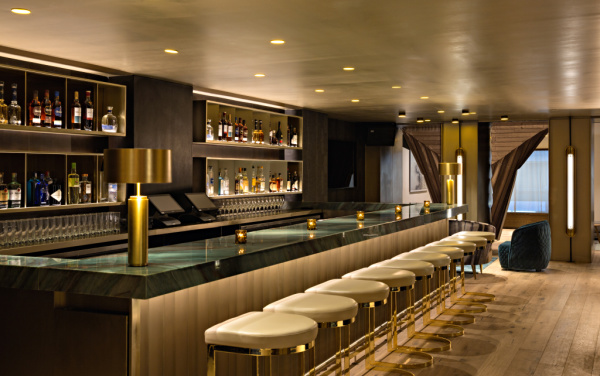 Besides drinks and big screens, the Oscar Watching Party at The Time Hotel’s LeGrande cocktail lounge offers guests the chance to vote their Oscar picks and win a $100 voucher at the bar. Guests can also toast their favorite Best Picture nominee with a specialty cocktail. Choose from the “Spiked Lee” (French 75), “Jason Mayne” (Old Fashioned),  “When in Roma” (Tequila Blanco & Cointreau) or “The Heart of Wakanda” (Vodka, Blueberries, Tonic & Purple Sugar). The drop-in party in the Theater District hotel’s glamorous mezzanine lounge unfurls from 7:30 to 11 p.m.
Time Hotel New York, 224 West 49th Street, 212-246-5252 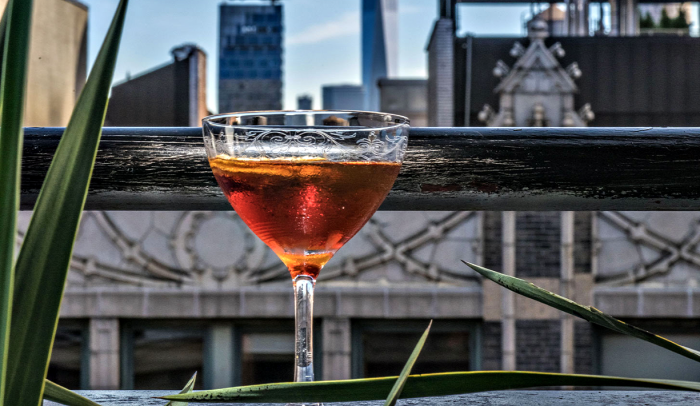 If staving off mid-show awards fatigue is a concern, Sir Henri, the swanky penthouse bar atop Chelsea’s Hotel Henri offers the perfect antidote — breathtaking views of the city from a perch in the sky. The softly lit bar serves up free gourmet popcorn and specialty cocktails inspired by Best Picture nominees like A Star is Born, Bohemian Rhapsody, Black Panther, The Favorite and Roma. In addition, guests can fill out ballots for prizes that include a two-night stay at Hotel Henri, dinner for two at the hotel’s new Greek restaurant Rodos or two rounds of free drinks.
Hotel Henri, 37 West 24th Street, 844 277-9123 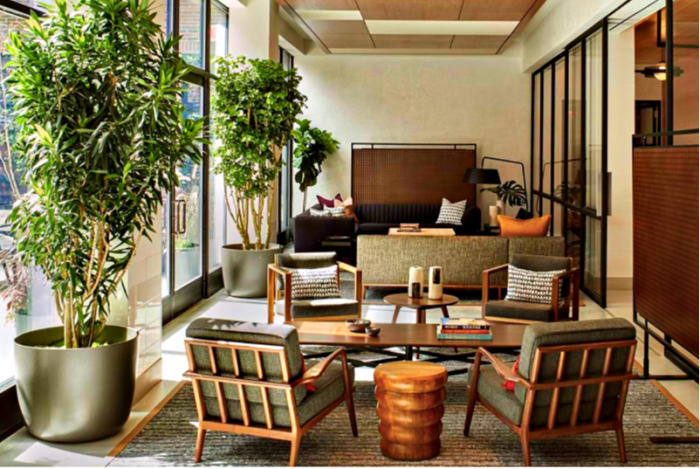 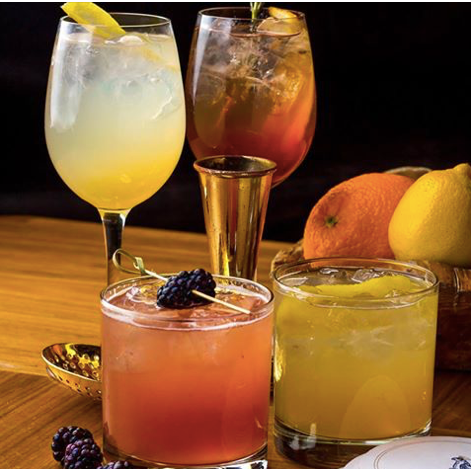 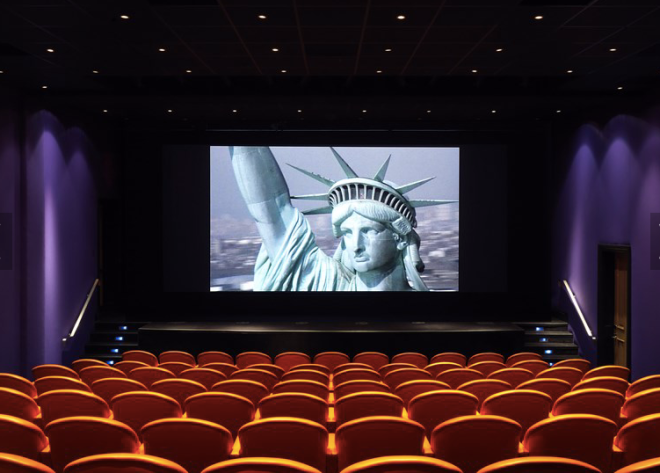 With a 99-seat screening room boasting 3-D capabilities and luscious orange leather seats, SoHo’s Crosby Street Hotel shows recent movies every Sunday night accompanied by a three-course dinner in the Crosby Bar ($55) or a cocktail and bar nibbles ($35). But Oscar Sunday is special. They skip the movie and screen the awards with free popcorn, starting with the warm-up at 7 p.m. Reservations required.
The Crosby Street Hotel, 79 Crosby Street; 212 226-6400 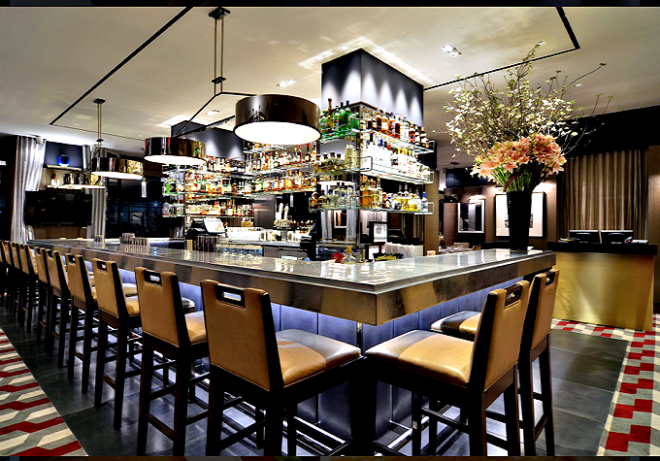 Back in the mid 1960s, Park Avenue’s Loews Regency, then known as The Regency, was among a sampling of New York City hotels included in Traveler’s Green Book, the real life guide that inspired Green Book the movie. The bar has a large screen television. Chances are good they’ll screen the Oscars. And in case you’re curious, some of the other New York hotels included in the 1960s Green Books were the Algonquin, the Empire, the Edison, the Essex House, the New Yorker, the Paramount, the Park Lane, the Pierre, the Plaza, the Roger Smith, Skyline Motor Inn, the Waldorf-Astoria and the Warwick.
Loews Regency, 540 Park Avenue, 212 759-4100 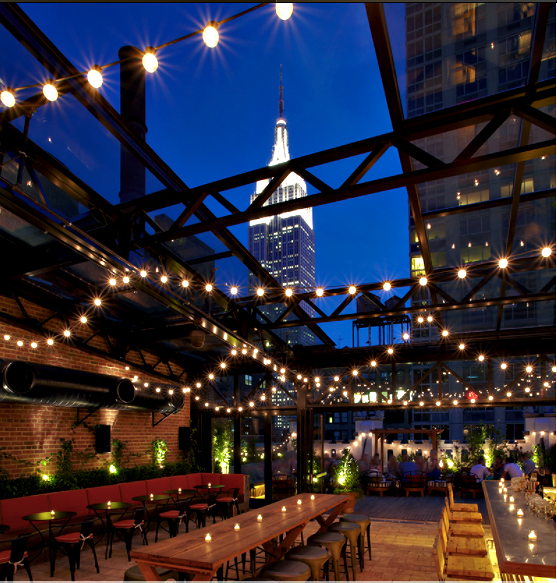 Walk the red carpet, pose for paparazzi and dress to impress at what’s billed as the first annual Pre Academy Awards Party at the Refinery Rooftop atop Chelsea’s Refinery Hotel from 6 to 8 p.m. Hosted by Lauren Scala of New York Live, Carl Radke from Bravo’s Summer House, and Travel and Spirits journalist Céline Bossart, the event is designed to deliver the Oscar experience without a trip to Hollywood (or an appearance in a movie). The hosts will select winners in categories like Best Dressed, Best Supporting Shoes and Outstanding Achievement in Accessories. The $25 ticket includes two drink vouchers and one ballot to be filled out before the awards show. Correct ballots will go into a raffle to win a one night staycation at Refinery Hotel, dinner for two at Parker & Quinn and drinks for two at Refinery Rooftop. Guests are welcome to stay and watch the Oscars, but table reservations are advised.
Refinery Hotel, 63 West 38th Street, to reserve contact Universe