To recap if you were stranded on a net-free island, word got out that this self-described boutique hotel in New York’s Hudson Valley charged $500 for negative reviews posted by wedding party guests. 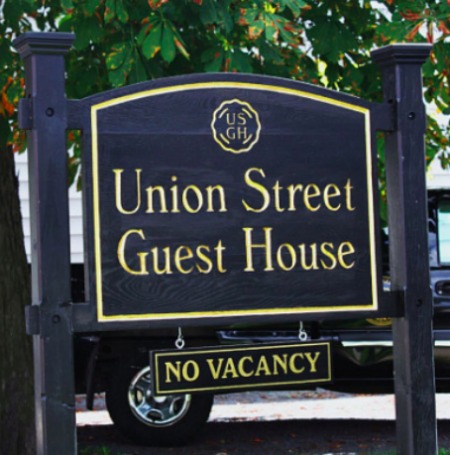 Or to quote the fine print:

You can spend two nights in the hotel’s two-bedroom Thunderbird Suite in early September and have money left over for dinner for that much, but never mind. The news, reported by CNN, The Daily Mail, the New York Post and many others, led to hundreds of one-star ratings and nasty write-ups on Yelp – many since removed — from reviewers who appeared to have never visited the place but were outraged by the perceived infringement of their First Amendment rights. An example from Irock S. of Austin Texax: “screw Yelp for removing my review of reviewing this place, what a farce. I’ll never go here.”

The attention also shined a light on the hotel’s persnickety cancellation policy, which boils down to buyer really beware (and don’t expect a refund short of a death in the family and maybe not even then). A curious definition of hospitality, it would seem.

Still, with just nine rooms, Union Street is a butterfly of a target for such heavy foot-stomping. The management appeared blindsided, declared the whole $500 fine business was just a joke, apologized on the hotel’s Facebook page and offered a 10 percent discount to anyone who cited the apology and booked a room. That olive branch unleashed even more vitriol, and when I looked today, the Union Street Guest House Facebook page had been taken down.

All this points to the growing – and unwavering — importance of online reviews by hotel guests. A new series of SAS Institute studies found reviews to be the most powerful indicator of value for consumers. “We hypothesize that the uncertainty associated with the hotel experience leads consumers to gather as much information as they can before purchase. Reviews provide this, ratings do not,” writes Kelly McGuire, head of the Hospitality and Travel Global Practice for SAS, on Hospitality Net.

Additionally, the study found that most properties find it difficult to bounce back from bad guest feedback. “Lower price or higher ratings do not overcome the impact of negative reviews,” McGuire writes. “Consumers simply will not choose a hotel with negative reviews.”

Of course, it’s hard to imagine the threat of a $500 fine for negative feedback is the best way to lure prospective customers, even if the threat is limited to wedding guests.

Indeed, in the past hotels have been collared for soliciting good reviews.

The Grand Dallas Hotel briefly made headlines a while back when a sign in the lobby offered guests an instant $5 for posting a favorable review on Tripadvisor (the hotel apologized and removed the sign when word got out the internet).

Staff members at The Ramada Glasgow Airport and Ireland’s Clare Inn Hotel & Suites were among those caught planting bogus reviews at their employers’ bidding.

Properties that take to solicitations – and threats – to cook their reviews tend to be small, independent and one of a kind, not unlike Union Street. A 2012 study by three business school professors from Yale, Dartmouth and USC found that independent hotels had the most to gain from favorable online reviews. Branded chain hotels gained the least.

Their investigation also found that hotels with a high incentive to write fake reviews had a higher percentage of five-star grades on TripAdvisor — an honor-system site like Yelp where anyone can write a review — than Expedia, which only accepts reviews from guests who have actually stayed at the property.

Still, the quality of a property’s reviews can matter. McGuire points to research indicating that consumers tend to trust reviews more when good grammar is used and words are properly spelled. “While there isn’t much that a hotel can do about this, you can feel secure that a badly written, negative review will not be valued as highly as a well-written positive review,” she writes.

A lot of the one-star reviews for Union Street Guest House fall into the badly written category. Whether the hotel can take heart from that is another matter.

Bad News for The Broadway: Another Hotel Gets Zapped for Fining Guests Who Write Bad Reviews
1 reply

Curtains, Anyone? The Latest Attention-Grabbing Hotel That Offers Too Much To... Move Over Yobot — A New Hotel Robot Rolls In
Scroll to top