If you plan to stay at the Aloft Cupertino on August 20 to witness the debut of Botlr, the new robotic bellhop that’s being test driven by the hotel, you’re out of luck. The Aloft is fully booked. (Rooms are still available for August 21, if you don’t mind being a day late.) 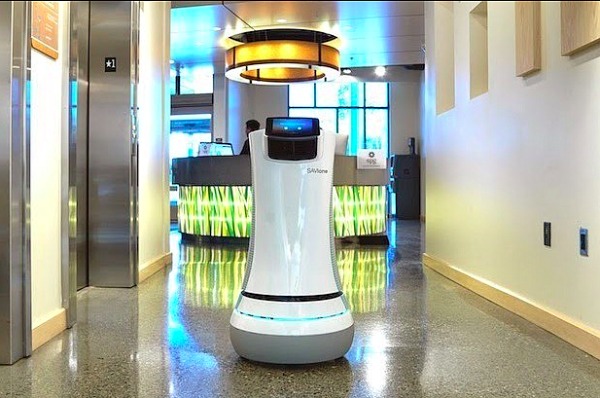 At your service. Photo courtesy Savioke

I know if I were in California next week I’d think of checking in. Botlr sounds intriguing.

The robot, developed by Silicon Valley robotic start-up Savioke, stands three feet tall and sports a bellhop’s painted bow-tie and stripes in Aloft’s upbeat hues. It looks like a cross between an upright vacuum cleaner and an upmarket trash receptacle – or a slimmed down R2-D2, as John Markoff observed while breaking the story in The New York Times.

Its task: to ferry items up to guests in their rooms, from a toothbrush or razor to a charger or a packet late-night M & Ms. It does this by rolling along at a brisk pace – it can clock in at four miles an hour – reaching any of the hotel’s 150 rooms in two to three minutes.

“When the robot reaches the guest’s door, the system calls the room, alerting the guest to the delivery,” writes The Times. “The robot, which has a camera and other sensors, can recognize that the room door has been opened and then lift the lid on the storage bin that holds the delivery.”

And now for the fun part. You don’t tip the little guy. Instead, you enter a review on a flat panel display. So far so good. But if the review is positive, the robot will do a little dance before it rolls away.

Watching the robot dance should be enough to boost sales of snacks and toothpaste 1,000 percent.

I’ll be eagerly following Botlr’s progress. The Aloft (motto: for the traveler open to new possibilities) seems the ideal testing ground for the robot (never mind that the hotel is strategically situated across from the Apple campus). Select service hotels like Aloft, with limited staff and no room service, are a natural audience for clever devices that can improve a hotel’s efficiency and a guest’s stay. They’re also the kind of place where a robot shouldn’t rob humans of jobs, at least in theory.

I don’t expect to see Botlr at The Plaza — ever. But I’ll bet Aloft’s competitors like Indigo, Courtyard Marriott, Hilton Garden Inn — and especially Yotel Times Square, home of the baggage-storing Yobot — will be watching Botlr’s every move.

A Hotel That Fines Guests $500 for a Thumbs Down? Why Online Guest Reviews Matter... Mermaids, Mythology and Magic: the Roger Smith Hotel’s Haunting New M...
Scroll to top