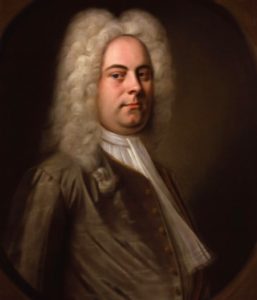 I’ll take a wild guess and assume that George Frederich Handel never dreamed his opera Rodrigo, written in 1707 when he was 22 years old, would have its North American premiere nearly three hundred years later in a hotel lobby.

But on May 21, 23 and 25, Handel’s fifth opera will be performed in the lobby of the Gershwin Hotel, a move that trumps the Met and every other opera house in the hemisphere.

The premiere comes almost a year to the day after Almira, Konigin von Castilien, Handel’s first opera, made its North American debut before an audience of 75 in the Gershwin lobby (Anthony Tommasini gave the production a thumbs up in The New York Times).

The person responsible for Handel’s long-overdue premieres is Jennifer Peterson, founder and director of operamission, a plucky pick-up company that stages old and new operas in concert settings. Make that unexpected settings, like Bryant Park, Brooklyn’s Fort Green and the Gershwin, though to be fair, a place called Gershwin should embrace music.

Rodrigo marks operamission’s 15th appearance at the Gershwin, which is renowned for its quirky/smart line-up of art exhibitions, theater, dance and music — from jazz and rock to classical. But this year is different. The hotel, famed for its relaxed, boho vibe and art world bona fides – the lobby boasted an original Andy Warhol Campbell Soup can – was sold last year to Triumph Hotels, whose properties include The Iroquois and the Belleclaire. Renovations are underway. The plan is to restore the hotel to celebrate its Beaux Arts architecture.

Is this the final aria for operamission and the myriad artists who have played the Gershwin? In a word, no, says Neke Carson, who has crafted the hotel’s envelope-pushing performance events for 12 years. “I’m still here, and I’m still the curator. And we’ll be doing the wonderful events we’ve always done,” he says.

That’s great news because the Gershwin is one of a kind (its creative roots extend to Warhol’s Factory). Operamission is unique, too. I caught up with Peterson, who once again will conduct the opera – a cast of six singers and 14 musicians — from her harpsichord in the middle of the lobby.

Why did you choose Rodrigo?

I want to stage all of Handel’s operas in the order he wrote them. We did his first last year, and the second, third and fourth have been lost. Handel composed Rodrigo, his fifth opera, during his early time in Rome. He was coming in from Germany and learning to write this different style of opera. It’s his first opera in Italian, in a style you don’t get to hear very much. It was like his graduate school dissertation. It had its premiere at the Teatro del Cocomero in Florence, and it’s been done in lots of places in Europe.

Why did it take so long to cross the Atlantic?

There are things in it that American audiences were not used to. There are three roles written for male sopranos – two were written for castrato. Today we have countertenors to sing these parts. And the training has vastly improved over the last 15 years. You hear that range in pop music, in a lot of Motown. But you need special training in operatic music to let the voice sustain that pitch.

What interests you about Handel’s early operas?

You see his development as a composer. You hear snippets of music that recur in later operas. You hear things in The Messiah that are hinted at in the early work.

The Gershwin lobby, which seats 75, isn’t the Met. How did the performance space shape this production?

It’s a site-specific opera, and the space defines our limitations. We’ve gone with a concert approach this year. The focus is on the musical intention. The orchestra, which is all early instruments, is in the center of the room. And costumes are very simple.

You’ve got an impressive line-up of talent.

Disella Larusdottir is an Icelandic soprano with a light, sweet voice who sings the part of Rodrigo’s wife Esilena. She recently made her debut at the Met as a Rhine maiden in Das Reingold. She and Madeline Bender, a soprano with a warm voice who plays Florinda, the young beauty who wants vengeance, are both very glamorous and complement each other. Nicholas Tamagna, who sings Rodrigo, is a countertenor on the rise. John Carlo Pierce, who portrays Florinda’s brother Guilano, is a tenor who has sung at the Bavarian State Opera. Daniel Bubeck, who plays Fernando, Rodrigo’s general, is a countertenor who wrote his  doctoral dissertation on Handel castrato roles. And Christopher Newcomer, who is also a countertenor, plays Evanco, who’s in love with Florinda. He recently made his Broadway debut as Mary Sunshine in Chicago.

What about the audience? Does performing at a hotel bring in a different crowd?

Because it’s at a hotel, people staying there or stopping by the café find out about the performance and get interested. It’s definitely a mixed audience and not the same people you see all the time at early music concerts.

Is The Hotel Check-in Desk Dead — And Does It Matter?
The Standard Gets Its Close-up In “Shame,” Michael Fassbender’s Unsparing New Movie
Only the Photos Remain: the True Blue Lobby of the Mondrian SoHo
A Gingerbread House, er, Hotel, er, Tower at Essex House
A Taste of England: Kedgeree at the Ace Hotel
LobbyFriend, a New Travel App, Aims to Bring Social Media to Your Hotel Lobby
16 replies

The Conrad’s Loopy Doopy Roof Bar Opens for the 2013 Season Is The SoHo Grand The Most Dog Friendly Hotel In New York City?
Scroll to top