This is what you see from a room near the top of the tallest hotel in North America, which happens to be in New York. (That’s a snow-covered Central Park down there, in case you’re wondering.) 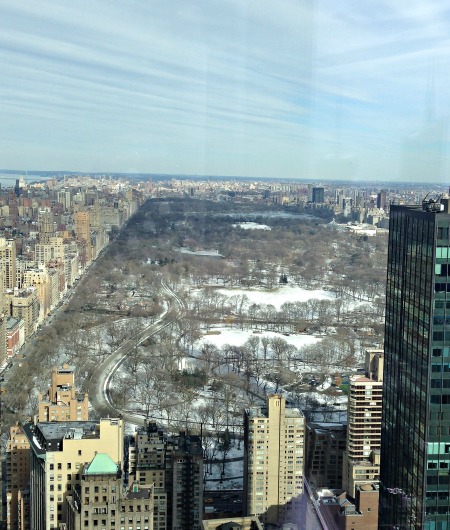 It’s a bird’s-eye view of a high-flying bird – or a low-flying plane. But guests in north-facing rooms on the 62nd floor at the new Residence Inn Central Park can take it in from a white leather club chair or a king-size bed for as long as they like without moving a muscle.

Tallest in this instance is a matter of semantics. Though Detroit’s Renaissance Plaza and Atlanta’s Westin Peachtree Plaza each out-height New York’s newcomer by five stories, they don’t occupy the entire space. The new 68-story Broadway tower is 100 percent hotel – a 378-room Courtyard Marriot Central Park eats up the lower 35 floors and a 261-room Residence Inn Central Park fills the upper 30. (The three-story topknot houses the equipment that keeps the place humming.)

The rooms on high floors here are not for travelers suffering from vertigo. But for those who like to imagine themselves as Batman on a rooftop looming over Gotham, a room on a high floor in the $320 million tower is the stuff of fantasy. Windows stretch from floor to ceiling, interrupted only by discreet structural beams. In the corner rooms where two walls of glass come together in a neat right angle, you can indulge in a Kate-and-Leonardo moment straight out of Titanic, gazing out upon the city below. 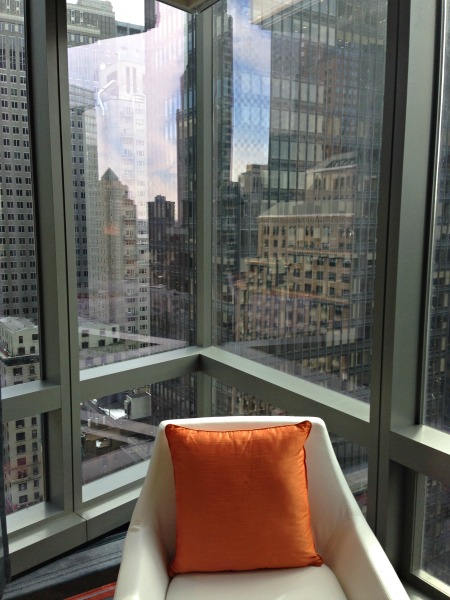 You don’t have to be on the 62nd floor — or the north side of the building — to see good stuff. Some rooms look onto the Hudson River (you can see up to the George Washington Bridge). Others overlook Times Square — and yes, come December 31, you can see the ball drop from some. Still others see a cityscape of buildings including beauties like Hearst Tower.

The views are so spectacular you may not immediately notice that the rooms in both the Courtyard Inn and Residence Inn are rather small. But they’re cleverly shaped with interesting angles. And they’re smartly designed. 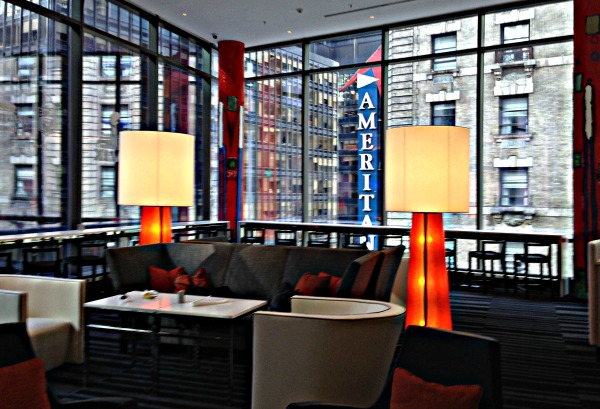 In Courtyard’s mid-century-inflected white on white rooms, the house orange is used sparingly like a spice, on throw pillows, cushions and not much else. (Grass green, the other house color, is almost nowhere in sight.) I love the orange ceiling in the white-tiled bathroom where the jaw-drop views are visible even from the shower (and yes, the shower head has an orange halo). Designed for business travelers, rooms have big desks, club chairs that swivel and outlets galore. Rooms have either king beds or two full beds, as do those upstairs at Residence Inn.

The palette switches to white with pops of muted navy at Residence, an extended stay property where the look is more classic. The big difference is each room comes with a Poggen Pohl kitchenette – a Euro-sleek wall unit outfitted with drawers holding a refrigerator, dishwasher and cookware, cabinets that house a microwave oven, flatware and dishes, and a sink. 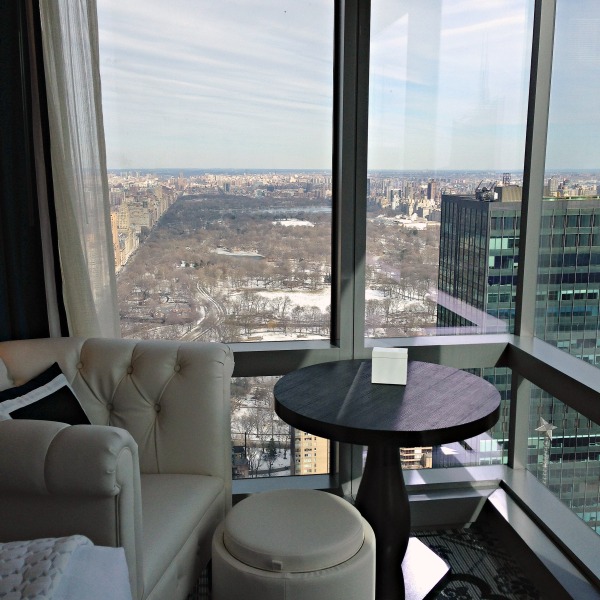 View from the Residence Inn

Though guests can stay for as little as two nights, Residence rooms are designed for longervisits. The top of the white leather footrest can be removed and turned upside down to become a tray. And rooms come with tables ready for a meal or a laptop.

Housing two hotels in one building, a trend catching on throughout the U.S., allows for shared facilities, like the property’s enormous fitness center says Timothy McGlinchey, general manager for both hotels. Each hotel also has a gigantic sitting area outfitted with sofas, club chairs, booths with individual flatscreen TVs and outltets galore. Residence Inn’s floor, open only to its guests, features a buffet breakfast area.

Courtyard’s sprawling lounge has a bar and business center — and eye-catching orange floor lamps — and is open to anyone, including walk-ins. Unfortunately, it’s on the fourth floor, so you’re not on top of the world. But lined completely with windows, it’s an apt preview of what awaits upstairs.

Marilyn Monroe at the Washington Square Hotel — in a Show of Rare Black and White Photographs
A Hotel Vending Maching That Dispenses Ouiji Boards and 24-Karat Gold Handcuffs? Meet Hudson Hotel’s Semi-Automatic
Fifth Avenue Star Power: The Pierre and The Plaza Co-Star with Richard Gere in the New Thriller “Arbitrage”
Hotels for Heroes, A New Hotel Rewards Program for Families of Hospitalized Soldiers
Is that Hotel a Christo? The New York Palace Gets Wrapped
Who Needs London? New York Hotels Where You Can Watch the Royal Wedding (With Breakfast)
6 replies