If you find yourself in Algonquin country, ie West 44th Street between Fifth and Sixth avenues, between now and March 31, do yourself a favor and stop by the famed hotel. For the second time in two years, more than 30 characters hailing from Hollywood, Broadway and the hotel’s storied Round Table days gaze down from above the wood paneling in the lobby and in the adjoining Blue Bar. 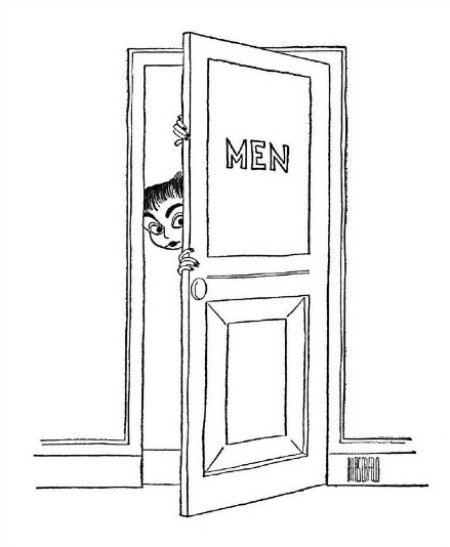 Look up and you’ll see 65 years of famous faces, from Fred Astaire and Claire Luce in The Gay Divorcee (1932) to Christopher Plummer in Barrymore (1997), all penned in black and white by the inimitable Al Hirschfeld, the long-time New York Times illustrator and unofficial Round Table.

Hirschfeld, who died just short of his 100th birthday in 2003, is on view in a delightful self-portrait in color, no less, proof positive that he did not see the world in black and white, despite the look of much of his art.

The artist, whose New York Times career spanned a mind-numbing 75 years, has been having a New York moment. In November 2014, the Algonguin’s first lobby exhibit of his work went on view for the holidays, curated by David Leopold, creative director of the Al Hirschfeld foundation and author of “The Hirschfeld Century: A Portrait of An Artist and His Age.” Leopold also selected the current crop of works, which went on view last November. In the middle the New-York Historical Society got into the act with a sprawling show of Hirschfeld’s work that ran from May through October.

And who knows? With a little luck a November Hirschfeld show at the Algonquin will become an annual event. Given his productivity, this could go on for years.

Celebrating the Iconic Line Art of Al Hirschfeld At The New-York Historical Society — And the Algonquin Hotel
W Downtown Dresses Up Their Bar With Art By Their Newest Artists In Residence
What You Missed if You Skipped the 2012 New York Times Travel Show
Hearts and Graffiti: Checking Out Nick Weber’s Rakish Valentine Art At The Quin
Where Would Will and Kate Go If They Were In Town? New York’s Hotels Battle It Out with Fancy Royal Wedding Breakfasts
Renaissance Murals on the Ceiling: The Sherry-Netherland Lobby Gets a New Old Look
2 replies

A Fresh Take on Chocolate Easter Bunnies (and Eggs and Flowers) at The Peninsula... Interviewing Rei Kawakubo of Comme des Garçons When It Was a Lot Easier to...
Scroll to top