If you last visited the Sherry-Netherland hotel two or three decades ago – or even early last year – expect a jaw-drop moment when you next enter the lobby.

For nearly 40 years, the lobby ceiling – a parade of graceful arches stretching what seems a mile high – was white. Generations passing through assumed it was always so.But history buffs, Art Deco enthusiasts and Sherry aficionados with long memories (and even longer lives) know otherwise. 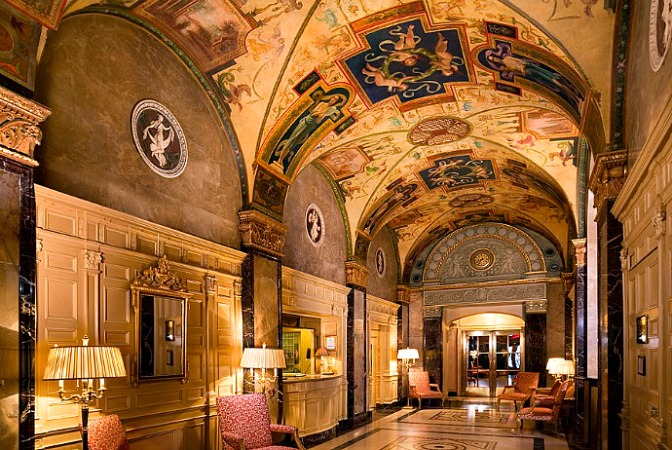 Back to the future: the Sherry Netherland’s restores ceiling

When the hotel opened in 1927, a magnificent mural of Raphael-inspired muses, putti and flower garlands blanketed the ceiling. And nearly 40 years after it was painted white to cover up damage from water leaks, the mural reappeared this spring in a blaze of Jazz Age glory.

Resurrecting a hidden mural was no small feat, as Michael J. Ullman, executive vice-president and chief operating officer of the hotel observed during a chat in his Fifth Avenue office above lobby. A total of 13 layers of paint obfuscated the brushwork of 1920s muralist Joseph Aruta, along with multiple applications of skim coating and patching.

For years, no one seemed to care. “The management at the time decided it was too expensive to keep repairing the damage to the mural from the leaks,” Ullman says.

But in recent years, an active board of directors, led by real estate magnate Arnold Gumowitz, decided to uncover the mural and restore it to its Gershwin-era beauty. After administering sample tests, EverGreene Architectural Arts, a New York company that’s done restoration for the Metropolitan Museum of Art and the Waldorf Astoria, found the murals to be “surprisingly intact” and got to work. 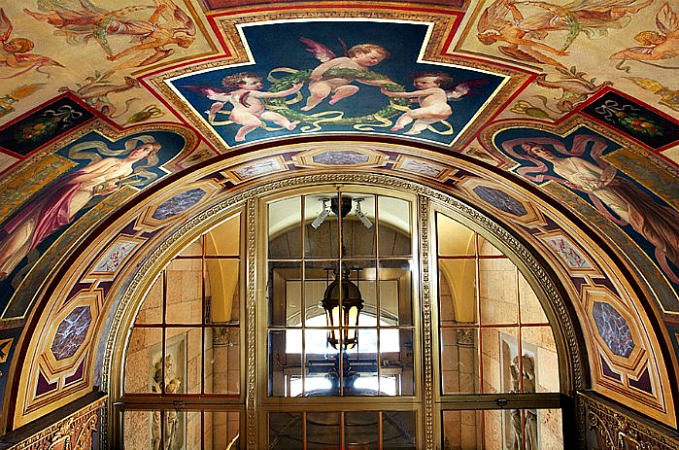 Putti on the ceiling.

To remove the old paint, teams of five to 10 workers scraped away the outer layers using inch-wide razors. When they homed in on the mural, they rubbed away the last of the white using solvents and went on to make repairs and restore damaged sections. “There were photos of the original ceiling in the library so they knew how the damaged areas should look,” Ullman says.

Reviving the ceiling took seven months. But the work was accomplished in a remarkably subtle manner. EverGreene set up a network of platforms near the ceiling for the workers and hid them with swathes of creamy fabric gathered to look like a ceiling covering in a Georgian country house.  Plastic cocooning kept fumes from the solvants at bay (the workers labored using industrial masks). Down in the lobby, it was business as usual, albeit with a much lower ceiling. “We had only one guest complaint,” Ullman says.

On view today is a double dose of art history – Aruta’s 1920s interpretation of Raphael’s frescoes for Cardinal Bibbiena’s Loggetta at the Vatican Palace, which in turn was inspired by Emperor Nero’s villa from 64 A.D., the Domus Aurea in Rome. It’s quite an eyeful. And it looks like it’s been there since 1927.

Meet “Naughty Angels,” An Art Show By Jimmie Martin That’s Making Mischief at The Surrey Hotel
What NYC Hotels Do Tripadvisor Reviewers Like Best?
Mermaids, Mythology and Magic: the Roger Smith Hotel’s Haunting New Murals
Last Chance to Catch ‘The Hirschfeld Century’ at The Algonquin Hotel
W Downtown Dresses Up Their Bar With Art By Their Newest Artists In Residence
Fifth Avenue Star Power: The Pierre and The Plaza Co-Star with Richard Gere in the New Thriller “Arbitrage”
14 replies

Camping in New York City? An Entrepreneur Discusses His Plan for Camp Rocka... A First Look at WestHouse, A NYC Hotel That Feels Like a Private Club and Channels...
Scroll to top