Last Thursday, when Lily’s Bar and Lounge at the Roger Smith hotel closed for the night, the large panels that envelop the room were the color of Wite-Out.

That changed the next day. Armed with acrylic paints, India ink and an idea from a recent visit to Iceland, artist Danica Novgorodoff rolled up her virtual sleeves and got to work.

There wasn’t much to see at first, as passers-by may have noted gazing in through the enormous window that fronts the Lexington Avenue bar. 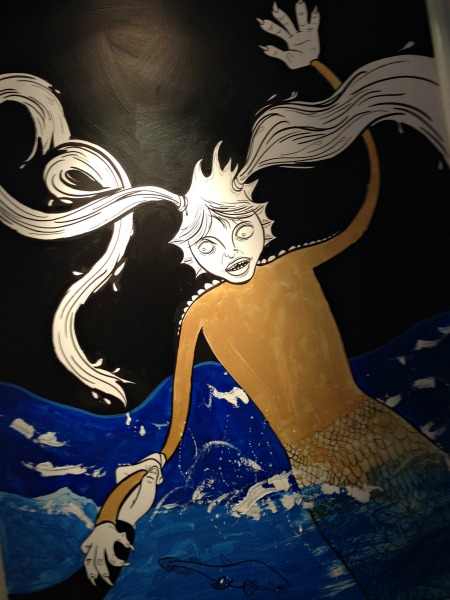 The layout of the panels wasn’t quite as Novgorodoff envisioned, necessitating an eleventh-hour change of plans.

“For a long time I just stood there, thinking,” she said during a chat in the bar.

But once she solved the puzzle of the panels, she moved fast. By the time late Sunday afternoon rolled around, bar goers sipping mojitos and Bloody Marys could also drink in Novgorodoff’s haunting graphic narrative of “The Mermaid of Slettusandur,” a dark Icelandic folktale riddled with death, deception and mysterious sea creatures, including a rapacious mermaid who’s distinctly non-Disney. 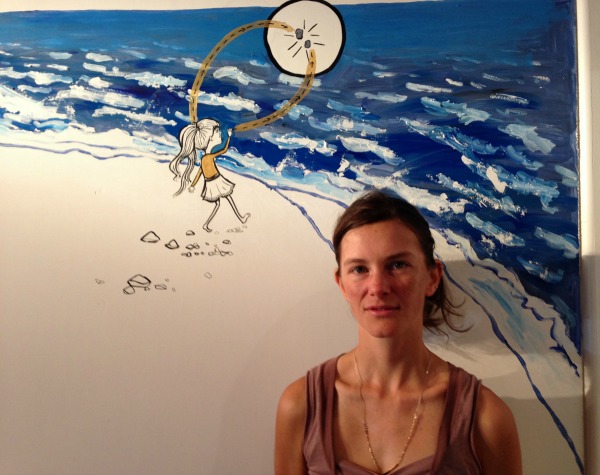 “I’m almost surprised I pulled it off in three days,” she says, taking in the swirl of black

and white storyboards that blanket the walls until October 27.

If you have a predilection for New York City history, you know hotels have commissioned artists to create murals for over a century. Two illustrious survivors are Maxfield Parrish’s “Old King Cole,” devised in 1906 for the short-lived Knickerbocker Hotel and in residence since 1932 at the St. Regis, and Ludwig Bemelmans’ fanciful Central Park romp at The Carlyle. 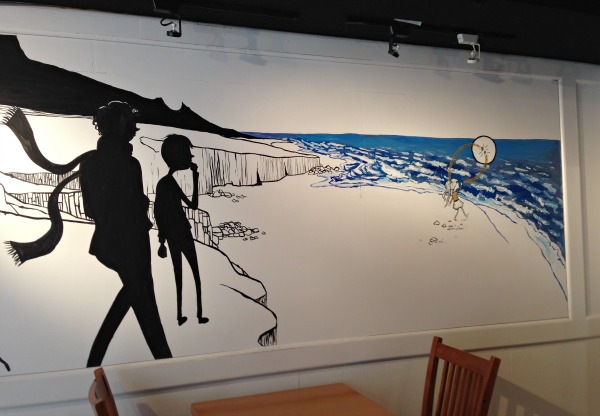 A mural in Lily’s Bar at the Roger Smith

But pop-up murals, designed to disappear, are the wall art of choice at millennial-minded hotels like the Andaz Fifth Avenue, which brings in a new artist to paint the bar’s exterior doors four times a year. The Roger Smith, an old but upbeat midtown hotel with moderately priced rooms and a dynamic arts program, goes a step farther with regularly changing exhibitions in the lobby, the two bars, an exterior wall and an in-room video channel. You could almost call it an art gallery that rents out rooms (132 of them)

Novgorodoff, an artist and illustrator whose plump CV boasts four graphic novels and a stint at the Macdowell Colony, would seem a natural for the Roger Smith. But she credits her love of running with helping her land the commission. As a member of the Roger Smith running team, the two-time marathoner heard about the hotel’s arts program from a fellow runner and got in touch with the program’s director. 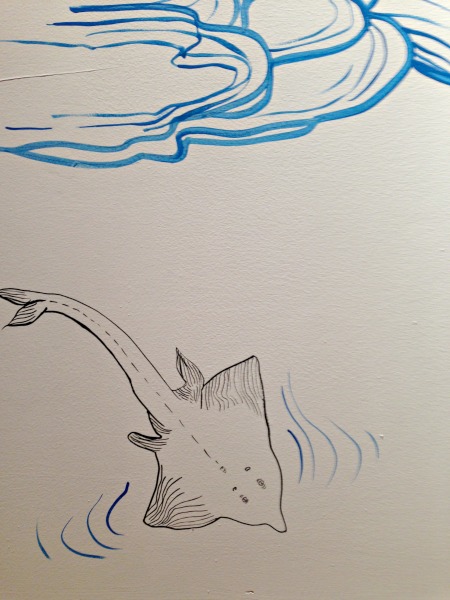 Not all mural sea creatures are predatory

Upon seeing the room, Novgorodoff knew her murals would impart a story. While backpacking in Iceland last month as an artist-in-residence, she was deeply moved by the wild forces of nature she observed in that windswept land. “One morning near the ocean I saw the wind blow the water coming off the fjord in a spiral, and I thought that could be a ghost,” she says.

The folktale she chose tells the story of a young man who follows his friends to the beach and sees a strange little girl throwing rocks into the air. They warn him not to go near her; she’s probably a mermaid. Forget Daryl Hannah. Icelandic mermaids are apparently fiendish and violent with bulging eyes and heartless souls. When he gets close, the girl indeed turns into a monster, entraps him in her claws and drags him under the water. “Maybe a young man drowned at sea, so the myth came about that he was taken by a monster,” Novgorodoff says.

A video in Lily’s window imparts the tale through captions, but Novgorodoff’s delicately forceful images tell you precisely what’s going on. The silhouette of the arrogant young man, scarf blowing in the wind; the enigmatic child at the water’s edge; the gilded body of the monster rising from the sea against a dull black sky. 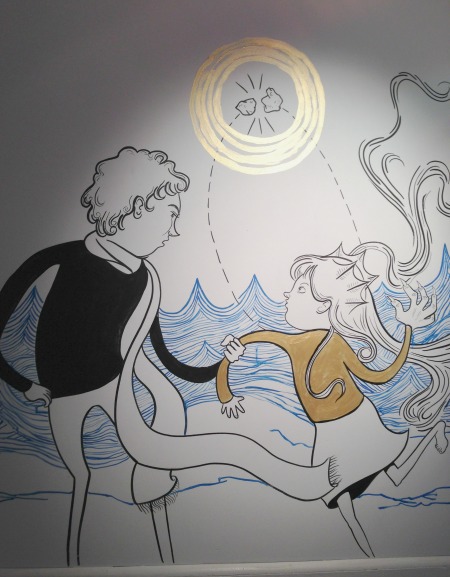 Though she designed her murals to be viewed at a distance, Novgorodoff sprinkles visual bon-bons throughout for bar-goers seated up close, like  whimsical stingrays, toothy sea life and thick slathers of blue and white paint depicting the water. Guests may find themselves springing for an extra round in order to take in everything that’s on the walls.

Working on a grand scale proved “really exciting,” says Novgorodoff, an artist accustomed to drawing on sheets of 11-by-14-inch paper. Performing in a window before an audience of passers-by ramped up the novelty. “An older man came in and watched for about 20 minutes,” she says.

As for creating work for a hotel, she smiles. “I’m happy that it’s in this hotel. I don’t think there are many others where it would work.”

Hunting Down the Greenest Hotels in New York City
Fashion Week: New(ish) Designers Check in at the Hudson, W and Roger Smith Hotels
Hearts and Graffiti: Checking Out Nick Weber’s Rakish Valentine Art At The Quin
Last Chance to Catch ‘The Hirschfeld Century’ at The Algonquin Hotel
Meet “Naughty Angels,” An Art Show By Jimmie Martin That’s Making Mischief at The Surrey Hotel
“Mindfulness” — A New Exhibit Under Glass at the Roger Smith Hotel
7 replies

Move Over Yobot — A New Hotel Robot Rolls In Don’t Leave Home Without It? How Americans Really Feel About Taking a Smartphone...
Scroll to top