I swiveled on my worn leather stool, sipping a chocolate egg cream and taking in the scene from my spot at the formica counter. There aren’t many places in Times Square where you can get an egg cream anymore let alone one as good as mine. But come Monday, there will be one less.

Cafe Edison, the coffee shop at the Hotel Edison, closes its doors for the final time when the last customer leaves tonight. 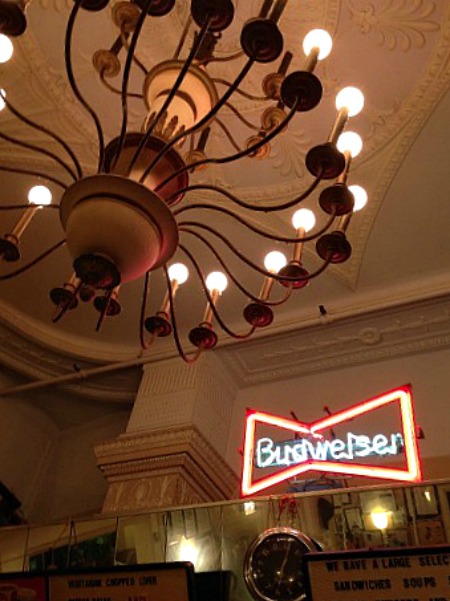 Looking up at Cafe Edison

The Edison is no ordinary hotel coffee shop.

August Wilson composed three of his plays on Cafe Edison napkins. Neil Simon was a regular. And you see producers, writers, musicians, stagehands and actors doing deals, learning lines or just hanging out over goulash soup and turkey sandwiches at tables next to the tourists. 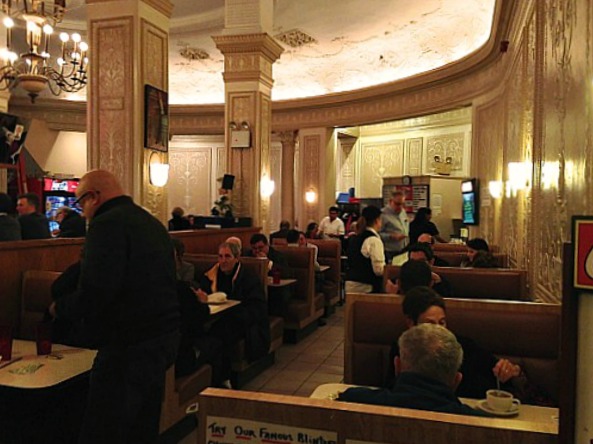 Reaction was swift with stories in The New York Times and Wall Street Journal. Mayor de Blasio headlined a protest. Glenn Close, Susan Sarandon and Martha Plimpton were among the 10,024 who signed an online petition that reaped 4,000 signatures the week it went up.

I’m an egg cream aficionado, and I felt the flavors of Damon Runyon’s New York slipping away with every sip. I wasn’t the only one ruminating about the coffee shop’s demise. The man two stools over polished off a bowl of matzo ball soup while conducting a lively cell phone conversation. “They’re gonna get rid of this place so they can put in a fancy restaurant with some famous chef,” he said between spoonfuls. He picked up his bowl, drank the last drops and resumed talking without missing a beat. “It’s like that Joan Didion line, good-bye to all that.”

Cafe Edison wasn’t always a coffee shop, and despite its Broadway Danny Rose patina it’s been here a mere 34 years and not forever, as it might appear. The spot was originally the Edison Ballroom, which opened with the hotel in the 1931. 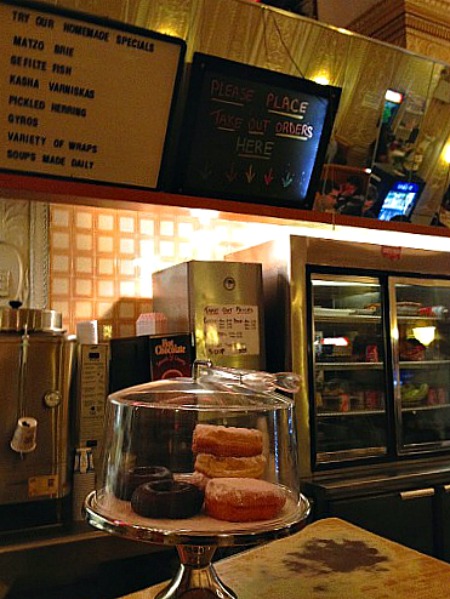 Donuts to stay or go on a classic cake plate

Whether it was a cost-saving measure or the Old World look of the built-in design, the coffee shop’s founders Harry and Frances Edelstein, Polish immigrants who escaped from Hitler, installed the oxblood banquettes and formica tables without disturbing the ballroom’s baroque chandeliers and pale pink walls garnished with plaster curlicues. (My favorite touch is the ghostly balcony perched above the neon Budweiser sign.)

Along the way Cafe Edison became known as the Polish Tea Room, a riff on the Edelstein’s roots or its dealmaking semblance to the old Russian Tea Room, depending on who you talk to. I learned about the place when I wrote about a magicians’ convention upstate a while back. “Come see us in New York,” the magic men told me, so I did. A local contingent held court regularly in a back booth, tucking into pastrami sandwiches and entertaining each other — and anyone who chanced by — with their sleight of hand.

Times — and real estate values — change. Gerald Barad, the hotel’s current owner, is affiliated with Triumph Hotels, which turns vintage hotels with good bones into boutique hotels like the Iroquois, the Belleclaire and most recently the Evelyn, which used to be the proudly quirky Gershwin. With its money location and ripe-for-renovation appearance, the Edison is a natural for Triumph’s fixer-upper portfolio. News that an aspirational restaurant would replace a humble coffee shop wasn’t really a shock once the hotel touted a “multimillion dollar investment” in the property. 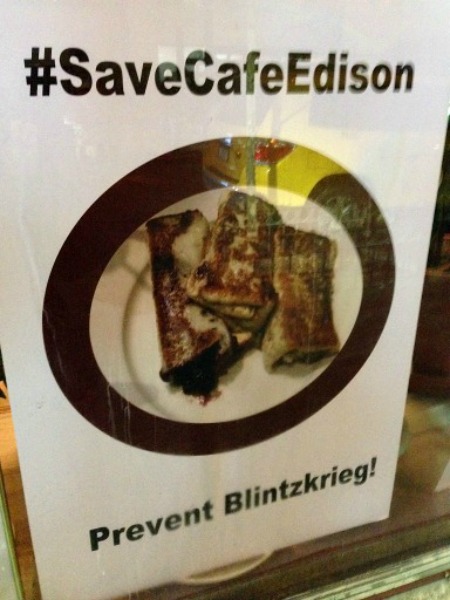 Except it was. Business boomed long before Cafe Edison’s endangered status elevated it to Times Square’s hottest property in its final weeks. I didn’t see a single empty table from my counter perch. And though the stool next to me occasionally freed up, newcomers pounced, from the model-slim beauty who ordered up extra fries with her take-out burger to the gazpacho-sipping woman who phoned her husband on a flip-top cell, gleefully informing him they had tickets to Love Letters.

When I exited around 5 p.m., the line for a table snaked out the door. Word has it the owner is looking for another locale. I hope he finds one and outfits it with chandeliers and cheese blintzes. I hope he can conjure up Cafe Edison’s magic. Pity they had to kill off the original.