As we breeze into the holiday home stretch, what better time to blow off an afternoon or evening with a fortifying drink, wintery exercise or seasonal visuals? Here are five hotels to check out even if you’re not checking in.

Hirschfeld at The Algonquin Caricature maestro Al Hirschfeld wasn’t an official member of The Algonquin’s vaunted Vicious Circle of wags and wits. But that seems an oversight. He drew them all — critic Alexander Woolcott, New Yorker editor Harold Ross, serial quipper Dorothy Parker and outer-orbiters like Harpo Marx and Tallulah Bankhead. Through January 6, 25 of his finest portraits, all with Round Table ties, gaze down upon lobby, trading virtual bon mots from their perch above the wood wainscoting. The Algonquin, 59 West 44th Street between Fifth and Sixth avenues; 212 840.6800 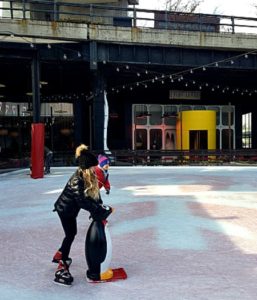 Ice skating at the Standard

Ice Skating at The Standard It’s back, the Meatpacking District’s biggest — and only — outdoor ice rink, just in time for holiday blading. A hipper take on Rockefeller Center, The Standard’s front plaza is an outdoor cafe in summer and a skating rink in winter. Fortify yourself for a night on the ice with Belgian waffles topped with maple syrup and bacon or a libation — spiced cider, hot chocolate or a hot toddy. Open Monday thru Thursday noon to midnight, Friday noon till 1 am, Saturday 9 am till 1 am and Sunday 9 am to midnight. The Standard, 848 Washington Street, 212 645.4646 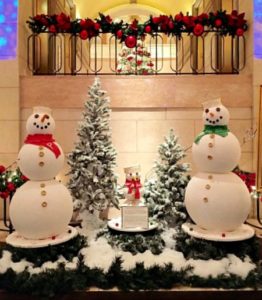 White Chocolate Snow Pages at The Peninsula Whoever is in charge at The Peninsula loves decorating. This Fifth Avenue beauty flaunts flowers and enormous decorated eggs in April and dresses in the pink to beat breast cancer in October. But the winter holidays trump them all as the hotel becomes a hermitically sealed winter wonderland. A family of larger-than-life white chocolate snowmen headline the festivities, outfitted with the pillbox hats and jaunty scarves of Peninsula pages. And yes, they’re too adorable to eat, especially the toddler snowpage, just one-foot tall. The Peninsula, 700 Fifth Avenue at 55th Street, 212 956.2888

Hot Buttered Rum at Bar 54 The number refers to the floor where the roof bar at the Hyatt Times Square New York perches. The highest bar in the city, the woodsy midcentury-inflected lounge looks down on Midtown Manhattan, up at the Empire State Building and out onto the nightly Hudson. And unless a Polar Vortex unexpectedly blows in, you can nurse your Southern Comfort or Rhapsode in Rye (my favorite) on the terrace. Caveat: the place is off limits New Year’s Eve for a private party, but hey, that’s just one night. Bar 54, Hyatt New York Times Square, 135 West 45th Street between Sixth and Seventh avenues, 646 640.3791 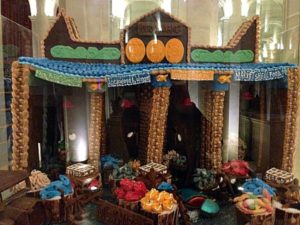 Gingerbread Sculptures at Le Parker Meridien Ever wondered what King Kong or the Fulton Fish Market might look like rendered in gingerbread? Me neither, but you can see them along with eight other New York landmarks translated into eye candy in the sixth annual Gingerbread Extravaganza at Le Parker Meridien. The results are witty and fragrant (we’re talking gingerbread, not farm cheese). Vote for your favorite at $1 a throw. You’ll get a chance to win a week at the Parker Meridien Palm Springs and support City Harvest, a New York City organization that distributes unused food from restaurants and hotels to the needy. Le Parker Meridien, 119 West 56th Streetbe tween Sixth and Seventh avenues, 212 245.5000

Holiday Eye Candy: The Sixth Annual Gingerbread Extravaganza Wafts Into Le Parker... Why You Really Want To Come To New York City In The Dead Of Winter (Think Hotel...
Scroll to top