Queen Elizabeth II visited New York City three times during her 70-year reign, but she spent only one night at a New York City hotel.

Her historic hotel stay occurred on October 21, 1957 during her first ever visit to the city. It should come as no surprise that the Queen and Prince Philip checked into the Waldorf Astoria, the mid-century, go-to hotel for presidents, potentates, popes and celebrities from A (Princess Astrid of Norway) to Z (Zsa Gabor). 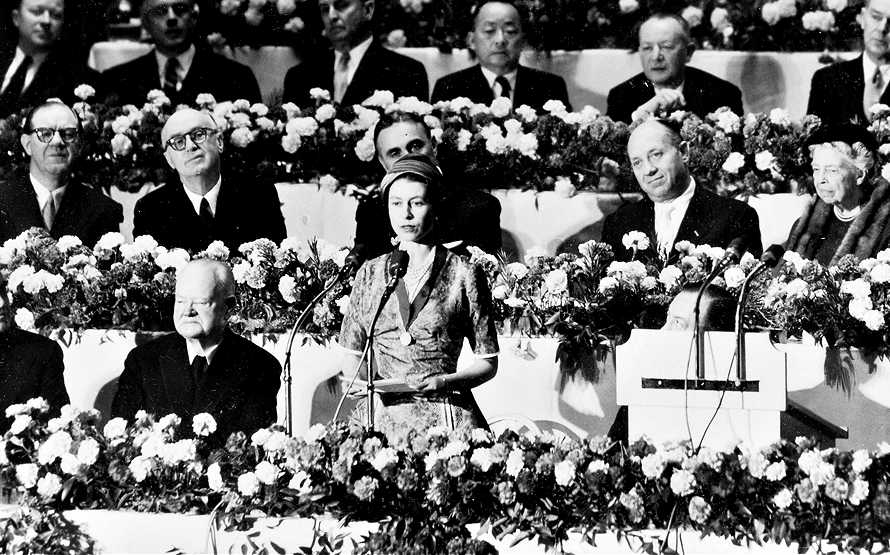 With its austerely elegant Art Deco edifice that gobbled up an entire Park Avenue block, the 26-year-old hotel that hosted the Queen boasted 1,413 guest rooms, a fleet of stylish shops, multiple restaurants, a mirrored hallway patterned after the Palace of Versailles and a private tower stocked with luxury apartments and suites that made it a favorite of residents like Cole Porter and Frank Sinatra and all those presidents, potentates and popes requiring security details and privacy.

The Waldorf also was agreeably situated near Rockefeller Center, Grand Central Station and other blue chip landmarks at a time when Midtown was New York’s undisputed center of gravity. The perfect base camp, in other words, for a brisk, 15-hour visit —  “a teaser,” the Queen called it — that was part tourist, part official and thoroughly royal.

Wearing a hat and white gloves, the Queen sailed into town on a US Army ferry, was showered with ticker tape as her bubble-top limousine glided up Broadway and wound up on top of the Empire State Building, where she proclaimed the view “tremendous!”  She also addressed the United Nations, as Queens are wont to do.

But the centerpiece of her visit, whether intentional or by chance, was the Waldorf Astoria, where the 31-year-old Queen appears to have spent the lion’s share of her visit. Luncheon, arranged by New York City Mayor Robert Wagner, was in the hotel’s Grand Ballroom, where 1,800 guests socialized over lobster bisque Waldorf with brandy, squab chicken Manhattan, wild rice and tiny green peas and delices of raspberries a la royale. Seated in the center of a dias, the Queen was flanked by Mayor Wagner and former President Herbert Hoover, who had officially opened the Waldorf 26 years earlier in a radio address delivered from the White House.

The Waldorf’s Grand Ballroom was also the setting for the Queen’s dinner, a breathtaking feast of South Carolina green turtle soup, Long Island striped bass with Champagne sauce, filet of beef with truffle sauce, nest of beignet potatoes, new string beans Amadine and Waldorf Savarin au Rhum with California nectarines, Oregon cherries and gold sabayan sauce. Whew! Among the many swells dining with the Queen were New York Governor Averell Harriman and UN Secretary General Dag Hammarskjöld. You can pick up a copy of the  elegant dinner program on eBay for $98.50.

After dinner the Queen and Prince Philip retired to Room 42R on the top floor of the hotel. As the story goes, the guest in the suite originally intended for the couple became ill and couldn’t check out as planned. In a scramble, the hotel created a new Royal Suite. No record exists of what the couple from London thought of their accommodations. But when Wallis, the American-born Duchess of Windsor, heard about the new Royal Suite, she demanded it for her next visit with the Duke — who happened to be Elizabeth’s uncle and the former King. They stayed for more than ten years.

Why did the Waldorf play a starring role in the Queen’s visit? Because it was pretty much the only game in town. A unique combination of luxury, size and security features made the Waldorf the city’s unofficial Host to the World, as the hotel liked to bill itself, for decades. Other hotels with sumptuous surroundings, notably The Plaza, The Carlyle and The Pierre, lacked the Waldorf’s spectacular ballroom and industrial-size kitchens. Enormous hotels like the Taft and the Roosevelt could feed a crowd but weren’t sufficiently tony. And no other property boasted a luxury tower with its own entrance.

As for the Queen, she usually sidestepped staying in hotels during her visits abroad, favoring official residences or the Royal Yacht Britannia. She was also a master of the whirlwind tour. Her final trip to New York in 2010 lasted just five hours. The Waldorf was lucky to get her, if only for one night.

Update: The Waldorf Astoria closed for a three-year top-to-toe restoration in 2017  and has yet to reopen (construction delays, Covid). When the hotel does reopen, it will be reborn as a luxury boutique hotel with adjoining condominium apartments, much like The Plaza. Suites are currently for sale.

Is the Waldorf Astoria to Be Sold Yet Again?
What Would Conrad Hilton Think of the Waldorf-Astoria’s $1.95 Billion Sale?
Why the Waldorf Astoria is Closing for Renovations, and Why You Should Stop By While You Can
The Fabled Plaza Hotel Is For Sale — Again
Strolling Through The Waldorf Astoria on the Final Night of its 85-Year Run
What You — and Will and Kate — Can Expect When New York Base Camp Is The Carlyle Hotel
0 replies

Sheraton New York Times Square Scores A Big Win Hosting the 2022 New York Democratic... What We Loved at the 2022 Hotel Trade Fairs — And What You May See on...
Scroll to top