When Blackstone Group sold the fabled Waldorf Astoria to a little-known Chinese insurer in 2014 for a record-breaking $1.95 billion, it looked like a done deal. But this week brought news that Blackstone is thinking about buying back the landmark Park Avenue hotel. 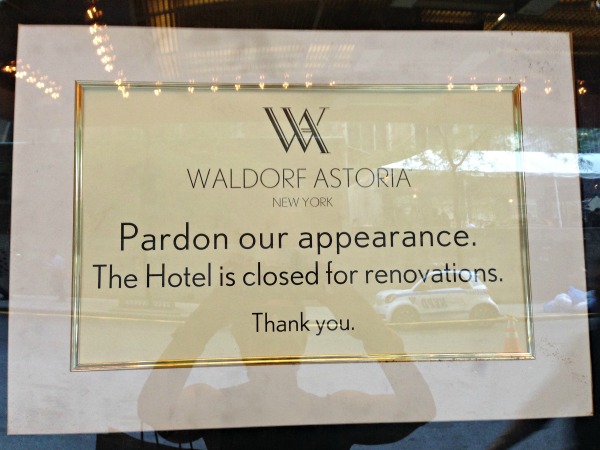 Posted on a Waldorf Astoria door

In light of the Chinese government’s crackdown on foreign investment, Anbang Insurance Group is said to be considering the sale of its blue-chip American properties that include Strategic Hotels & Resorts and the Waldorf. The U.S. private equity firm is said to have held initial discussions about bidding for Anbang’s assets in a sale overseen by the Chinese government, according to Bloomberg.

But a sale is by no means a sure thing. The deliberations are at an early stage and Blackstone could refrain from bidding, an unnamed source told Bloomberg.

Talk that the Waldorf might be back on the market surfaced last July when it was reported that China had instructed the insurer to sell off foreign assets. At the time Anbang denied receiving the order and said it had no plans to jettison its American properties. But a series of scandals last summer rocked the company, including the termination of Anbang’s head of real estate in August, two months after the company’s chairman was detained for questioning by Chinese authorities on matters never made public.

Meanwhile, it’s not clear how renovations are going at the Waldorf, which closed its massive doors last March. A month after the building was shuttered, Skidmore, Owings & Merrill, the firm leading the renovation of the hotel, released initial renderings of public rooms including the Park Avenue lobby, main lobby and the breezeway connecting them, faithfully restored to their Art Deco glory.

Beyond that, things appear to be moving slowly, which is not necessarily unusual for a landmarked property.  In November reports surfaced that Anbang wanted to trim the number of hotel rooms to 350, down from 1,413, with the lion’s share of the real estate gobbled up by 350 residential condos. It was also reported that Aecom Tishman, the construction giant whose projects include New York’s Baccarat Hotel & Residences and the Second Avenue Subway, would be handling the project. But the company never issued a press release, and no mention of the project appears on their website. What’s unclear is whether the possibility of a sale is delaying the process.

For now, the Waldorf looks much as it has for nearly a year — closed for renovations, as the signs posted on the building say.

What Would Conrad Hilton Think of the Waldorf-Astoria’s $1.95 Billion Sale?
Strolling Through The Waldorf Astoria on the Final Night of its 85-Year Run
The Fabled Plaza Hotel Is For Sale — Again
You Like Embassy Suites – And Your Favorite New TV Show is . . . “Sleepy Hollow?”
Where the Swells Stayed — A New Pictorial History of the Waldorf Astoria
The Famous Waldorf Astoria Lobby Clock, Now Marking Time At The New-York Historical Society
0 replies