Guests at five-star hotels expect a cushy bed when they’re tucked in for the night. Still, the vaunted Four Seasons mattress comes with an extra sprinkling of fairy dust. 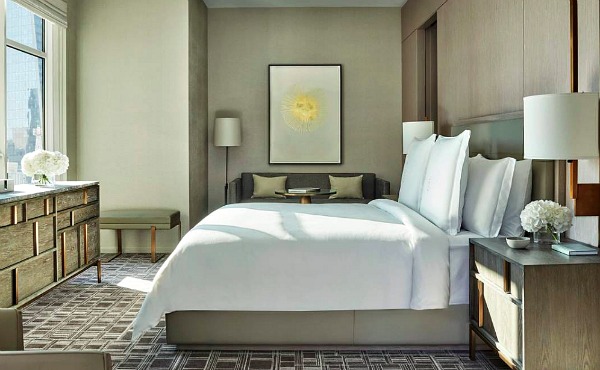 Under the bed at Four Seasons Downtown

The  bed’s been burnished by genuine-sounding celebrity endorsements, like Julia Roberts’ rave about the Four Seasons mattress on Oprah. And the only way to take one home is to order it directly from the hotel, preferably in person (website or catalog sales aren’t offered).

So the announcement that Four Seasons has a new bed is news.

The revised bed, created for the hotel group by Simmons, plays to a luxury hotel trend – customization. Guests choose, Goldilocks style, from three mattress toppers – one that’s firm, one that’s plush and one that’s right in the middle. It’s like a pillow menu for mattresses.

Beds come made up with the middle topper, but the soft or firm models can be substituted “in minutes” depending on the guest’s request, according to the press release. Repeat guests will find their preferred topper on the bed when they arrive.

In addition to the customized bed, Four Seasons offers a choice of down or hypoallergenic pillows.

When will the new beds arrive at the Four Seasons New York? That’s still to be determined, a spokeswoman for the hotel said. The full rollout to all FS properties will take four years, occurring as existing beds need to be replaced.

And yes, the new beds will be available for sale from the hotels that have them. After all, sleeping on a bed at a hotel is the ultimate road test.

Hunting Down the Best Chocolate Easter Eggs at New York City Hotels
Is Hotel Room Service on the Way Out — And Do You Care?
Are These The Best Hotels in New York in 2012? AAA Thinks So and Rolls Out Its Five Diamond List
On A Roll: The Four Seasons Food Truck Pulls Into New York
It’s Spring — in These NYC Hotel Lobbies (Even if it Still Feels Like Winter Outdoors)
5 replies

And The Oscar Goes To: NYC Hotels with Supporting Roles In the 2014 Academy... What’s on View Across from Check-in? How the Quin Hotel Turned The Lobby...
Scroll to top