Sandwiches are not the first thing that leaps to mind when I think of Four Seasons hotels. Neither are food trucks. But what do I know?

Last year Four Seasons kitted up a food truck and cruised along the West Coast.

Turns out the truck is bicoastal. Earlier this month it visited Boston and Philadelphia. And on Monday it pulls into New York for a six day stay before heading off to Baltimore on October 6.

A rolling locavore, the truck serves up five-star riffs on home town fare cooked up by each hotel’s executive chef. They dispatched cheese steaks in Philadelphia, sold 400 lobster rolls a day in Boston.

And for New York? 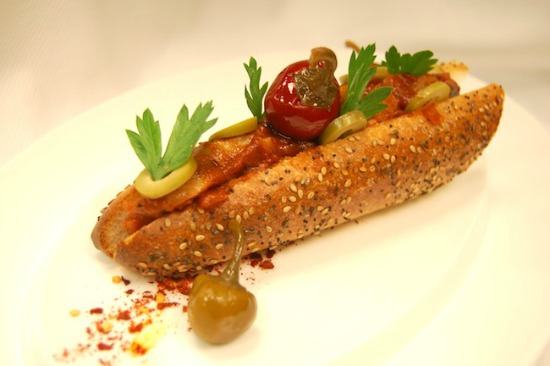 Not for the day you start your diet, in other words, but kind to your wallet (everything is $10 or less, and a portion of the proceeds goes to New Yorkers for Children, a program that works to improve prospects for children supported by the child welfare system).

Here’s the schedule if you’re hungry in New York:

Here’s where to catch the truck after New York:

Should you want to try John Johnson’s New York hoagie, aka Grilled Sweet Sausage and Pepper on Green Olive Baguette  at home, here’s the recipe. (It’s easier to hunt down the food truck.)

1 sweet sausage of your choice

Salt and pepper, to taste

1. Fill a medium pot halfway with cold water and add sausage. Bring to a boil and shut off the flame. Let sausage sit in water until water has cooled to room temperature. Remove sausage from water. Grill sausage and put aside until peppers are cooked.

2. Heat a large sauté pan over medium heat and add 1 tablespoon of extra-virgin olive oil. When oil is hot, add sliced onions and minced garlic. Cook until tender and then add peppers, tomato paste crushed tomatoes, Espelette powder and smoked paprika. Lower temperature, and add a splash of water. Continue to slowly cook down the peppers and onions until soft. Season peppers with salt and pepper. Slice grilled sausages once cool.

3. Cut baguette lengthwise (but not all the way through) and drizzle with remaining olive oil. Rub the inside with peeled garlic clove. Grill bread, butterflied open and face down on the grill.

4. In a heavy sauté pan, heat up the pepper mixture and add sliced grilled sausage. When entire mixture is warm, place it into grilled baguette. Garnish with sweet hot cherry peppers and sliced olives.

Coming Soon To A Hotel Near You: Local Everything, BYO Tech and Beds That Look... The InterContinental New York Barclay Closes for Renovations
Scroll to top