What can you expect when you check into the hotel of the future, be it next month, next year or next decade? 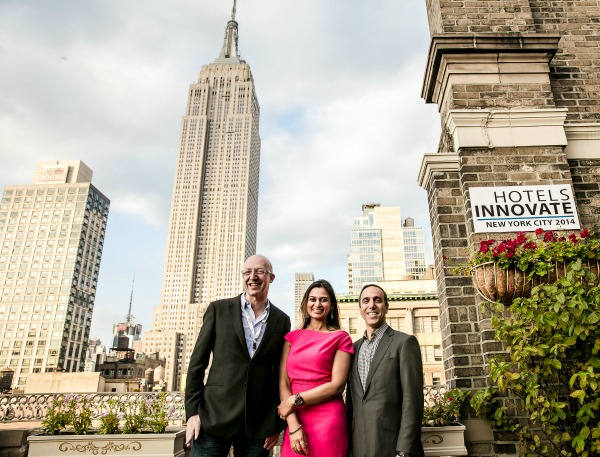 Here are some of those ideas — and what hotel people are talking about (or at least, what they discussed on Friday).

BYO tech Debate still swirls over whether hotels should supply guests with in-room devices, like programmed iPads, or provide platforms for customers to sync up their own devices. The latter view is winning, says Gustaf Burman, who heads technology for Morgans Hotel Group. He says people bring “an average of 2.7 devices with them and want to use them without downloading another app.” More important then supplying tech devices for guests is supplying strong WiFi where the devices guests bring will work, he says.

Too many humans? Debate also surrounds the role of flesh and blood staff at hotels. Less is more, says David Gutstadt, a managing director at Hospitality Related Companies who’s overseeing development of the Hudson Yard hotel. He cheers hip, pared down, millennial-minded properties like Citizen M, Pod and Thompson Group’s Tommy that have devised ways to deliver service “without throwing so many people in your face.” But is that for everyone? Brendan McNamara, who oversees marketing, communications and product development at Hampshire Hotels Management, says the divide is more about money than millennials. Expect more tech-based service at low-to-moderate hotels. “People still expect someone at their beck and call in the luxury segment,” he says.

Forget Marriott? Iconic brands offer name recognition, reservation systems and loyalty programs but eat up 12 to 15 percent of revenues. Do hotel developers still need to pair with a big brand to create a successful hotel? TripAdvisor and e-commerce sites changed the game, says Richard Millard, whose Trust Hospitality specializes in independent boutique hotels. “You need a brand on the highway where no one’s going to stay at the Richard Millard Hotel, but not in Manhattan.”  Real estate developer Will Obeid, whose Gemini Realty converted three branded Manhattan properties into stylish, moderately priced Gem Hotels, predicts a number of flagged Manhattan hotels will be deflagged in the coming years. “Visitors to the city want a quintessential New York experience,” he says. But Mark Gordon managing partner of Tribeca Associates, a real estate development firm whose properties include Starwood’s luxurious Baccarat Hotel, cautions that branded hotels have an advantage when the economy trends down. “Banks are more nervous about working with independent hotels than brands,” he says.

Go local No debate over this one. Beyond locally sourced food, decor and entertainment, hotels are looking outside their walls but not too far. Hotel websites and blogs increasingly showcase local restaurants, shops, artists and personalities to give guests a sense of being an insider on the road. “I feel I spend just as much time promoting the neighborhoods as I do the hotels,” says locavore Lisa Zandee, a Denihan Hospitality Group executive who develops the James Hotel brand. Meanwhile, New York’s Viceroy Hotel chose to collaborate locally with New York chef Marc Murphy for the restaurant and New York-based Gerber Group for the roof bar at the hotel that opened last year. “We do amazing rooms, but it should be criminal for us to run a nightclub,” says Viceroy CEO Bill Walshe.

Budget chic The template for the new Night brand of two-star select service hotels from Hampshire Hotels Management — inspired by Times Square’s trendy Night Hotel, transformed in 2006 from a Best Western — calls for high concept reboots of existing properties (think big-box boring). A tight budget can be liberating, even at 170 square feet, says McNamara, who’s overseeing the project. “It’s like those TV shows were you have $10 and an hour to do over the room.” One idea: create a space that moves from a day to night with a daybed look, complete with piping and bolster. “If you’re at a conference, bring people back to your room and they have to sit on the bed, it’s creepy,” he says. But a daybed? Not so.

Try art Sometimes a hotel needs an attention grabber or a conversation starter for the lobby or an event. Hire an artist to work the room, suggests art impresario Anita Durst of chashama, who arrived with performance artist Muffinhead. Nearly seven feet tall in his platform shoes, he posed for pictures, spoke only when spoken to (polite is good) and yes, made a big impression.