The Barclay is taking a breather.

After the last September guest checked out, the InterContinental New York Barclay, to use its full name, closed for renovations. The storied midtown hotel will reopen in about a year, in time to celebrate its 90th birthday before 2015 checks out.

The move is a smart one for a hotel that housed Ernest Hemingway, Martin Luther King and society hostess Perle Mesta in its heyday but was looking too classic for its own good. 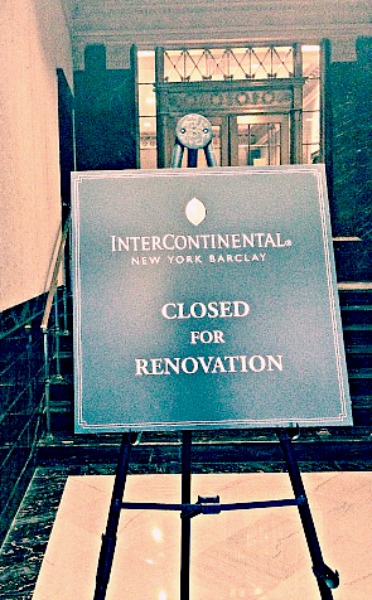 Still, a starchy backdrop didn’t prevent the hotel from blazing into the 21st century. In recent years the Barclay embraced sustainability, no small feat for a Roaring 20s property, tapping wind energy for 100 percent of its electricity, outfitting its menus with locally sourced offerings, including vegetables and herbs grown on the roof, and even serving honey harvested from the hotel’s rooftop beehives.

The hotel always had a nature streak — and a sense of humor. In the pre-Twitter era, the lobby showpiece was a gigantic birdcage, home to an assortment of exotic tweeters. (Tiny birdcages adorned the lobby Christmas tree in recent years.)

No word on what we’ll see $175 million from now, but with the interiors in the hands of architects Stonehill & Taylor (Crosby Street Hotel,  NoMad, Refinery) and interior designers HOK (Waldorf-Astoria renovation), we await, eagerly.

And the beehives on the roof? A hotel spokeswoman assures us they’ll be back.

Best of the New: What We Saw And Loved at NYC Hotels in 2011
Ace it! New York’s Best Hotels If You’re Going to the U.S. Open
Sidecars, Cosmos and Harvey Wallbangers: Drinking Up Eight Decades of Cocktails at The Barclay
Who’s Afraid of the Dark? Not These Chic New York Hotel Hallways
A Super-Green, Wind-Powered Holiday Tree at the Barclay
Cheers! The Best Hotel Drinks of the 2010 Holiday Season
1 reply

On A Roll: The Four Seasons Food Truck Pulls Into New York Which New York City Hotel Restaurants Made The Cut In Michelin’s 2015...
Scroll to top