The first week in October is pretty innocuous unless you’re a foodie — or to be precise, a guide-loving foodie. This week Michelin and Zagat published their respective, red-covered 2012 New York City restaurant guides within a day of each other. That’s like back-to-back Golden Globes and Academy Awards. 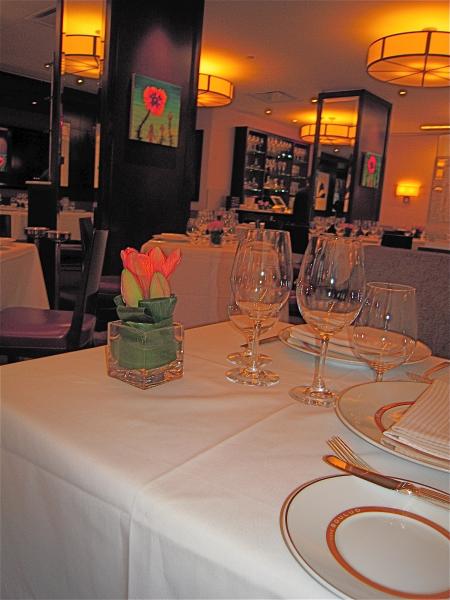 Cafe Boulud at The Surrey

How did New York’s hotel’s fare?  Brilliantly if we’re discussing Jean Georges, the sleekly modern dining room at the Trump International Hotel.
Calling it “New York’s fine dining at its grandest” Michelin once again bestowed three stars upon Jean Georges Vongerichten’s flagship restaurant. (New Yorker readers may recall John Colapinto’s mouth-watering article “Lunch with M,” about the author’s calorie-defying lunch at Jean Georges with a Michelin inspector in 2009.)  Over at Zagat, the crowd sourcers rewarded Jean Georges with a coveted Top Food award (“expect brilliant everything”) and rated it the fifth best restaurant in the city (it was fourth last year).

captured two Michelin stars – a leap up from one star in 2011 — and came in at 20 on the Zagat Top Food list. An obviously thrilled Robuchon told Eater, “Ten years ago, Michelin wouldn’t have given this restaurant two stars. They used to judge on the table setting [and formality]. Now they judge the food more. But I appreciate very much that we never know when they come. They are anonymous. [Other critics] sometimes tell you they are there — and then don’t pay for their food.”

Here are the relevant stats for 2012 from Michelin:

Forty-six restaurants scored a single star, which signifies “very good food in its category.”  Four are at hotels.

+ Adour at the St. Regis

+ The Breslin at Ace

Of the nine two-star restaurants (“excellent cuisine, worth a detour”), three are at hotels.

+ Gordon Ramsey at The London

Over at Zagat, five hotel restaurants landed in the Top Food fifty:

+ Jean Georges at the Trump International

And here are Zagat’s top restaurants for Hotel Dining.

+ Jean Georges at the Trump International

+ Adour at the St. Regis

+ Gilt at the New York Palace

+ Locanda Verde at the Greenwich Hotel

ONY Takeaway: It’s hard to argue with either list as the restaurants selected are undeniably excellent (the Peeky Toe Crab Benedict at Café Boulud was the most memorable hotel breakfast I had all year).  But this is an event dining list. Next year let’s hope for more outliers like the Breslin, ie less formal but adventurous.

Snooze News at the Benjamin Hotel, Just in Time for National Sleep Awareness Week
What’s The View Like Up There? Checking Out the Tallest Hotel in North America
Only the Photos Remain: the True Blue Lobby of the Mondrian SoHo
The Gershwin Hosts a Photo Show from the Creepy New Film “We Need to Talk About Kevin”
Where’s Matilda? The Algonquin Cat Disappears After the NYC Health Department Pays a Visit
Best of the New: What We Saw And Loved at NYC Hotels in 2011
3 replies

The Pierre Serves Up a Healthy New Menu for Calorie Counters Only the Photos Remain: the True Blue Lobby of the Mondrian SoHo
Scroll to top