At a glance: I’m not a big fan of the glass-faced sliver hotels that have popped up in Chelsea and Times Square in recent years. But exceptions occur, and Hilton New York Fashion District is an intriguing one.

With fashionably dressed mannequins in the windows and a colorful Mondrian-inspired artwork above the check-in desk (look closely and you’ll see it’s pieced from spools of thread), the place all but yells themed boutique hotel.

But this 2010 property situated in the heart of the Garment District — and originally called Fashion 26 — is cut from a different cloth and strives to go beyond one size fits all.

The theme, albeit contrived, is a plus and fits a hotel planted in this fashion-savvy-but-scraggly neighborhood like a pair of slim-cut Rag + Bones jeans. Though not inherently fashionable, West 26th Street, with its mess of lofts, storefronts and warehouses, is where clothing is still designed, constructed and taught (the esteemed Fashion Institute of Technology is a block away). What better way to turn a ho-hum locale into a selling point?

But witty touches like side tables shaped like gigantic spools of thread abound, and I like the lobby’s generous seating on charcoal leather banquettes, brightened by silky throw pillows. And the staff seems amused by their surroundings. “Check out our desk,” enthused an attendant. From the front, you see a brute black granite slab. But the sides are cast iron grates, reminiscent of those found on vintage Singer sewing machines. Sweet.

Rooms: The standard queen room I saw looked like the rooms pictured on the web site — only smaller. Though big enough for two people who don’t plan to occupy it for endless hours, it reminded me of a Container Store ad: there was a place for everything with not an inch wasted.

White with a wallpapered accent wall (the jaunty dotted pattern calls to mind buttons), the room featured a queen-size bed with a rectangular dark wood headboard, a flatpanel TV above the generous desk/dresser combo, a wheeled leather desk chair and a white-curtained, floor-to-ceiling window overlooking the boring office buildings across the street (the views improve as you go up). Though more conventional than the lobby, the room was spotless.

I also liked the smart square of a bathroom, which, despite extremely close quarters, managed to serve up a generous stall shower and stylish sink. Clever, too, was the dark wood hallway tower with stacked shelves holding the minibar, coffee maker and coffee cups.

Food and drink: Breakfast, lunch and dinner are served at Rare Bar & Grill, a gourmet burger chainlet with a link at the Affinia Shelburne hotel in the East 30s.

Dressed in red, black and gold, spacious, split-level Rare features a bar adjoining the lobby and a sky-lighted subterranean restaurant reached by a curving, wrought iron staircase. The restaurant is oddly glamorous, if you don’t mind the lack of windows and the noise (the place was earsplitting when I late-lunched in a room that was less than half full).

Food is Steak House Lite, too. Red meat, ie steaks and burgers, rules, but mindful of the hotel’s fashion-consciousness, slimmed down offerings appear, like a 6-ounce hamburger on toast. I lunched on a plump, juicy 8-ounce burger topped with caramelized onions for an additional (delicious) and a side of cole slaw (so-so).

Amenities: Free WiFi. The concierge keeps a list of the day’s sample sales. ATM in the lobby. Dream Kits available with sleep masks and earplugs. The basement fitness center is large and well equipped, with a personal trainer available. Business center open 24 hours. Gilchrist and Soames bath products. A keycard is required to operate the elevator.

Surroundings: The hotel is in the heart of New York’s Garment District, surrounded by retailers, wholesalers and manufacturers of handbags, hats, belts and trimmings. It’s also a block away from the Fashion Institute of Technology, a leading design school. But if you’re not a garmento, this is an in-between neighborhood, a mish-mash of small businesses, office buildings and delis. Fortunately, good things are not too far away. The Empire State Building, Macy’s and a slew of mall-type stores, like H & M and Gap, are nearby. Times Square (and the Theater District) is just two stops on the subway, while Lincoln Center is four. Downtown Manhattan, including Greenwich Village and the Meatpacking District, SoHo, Tribeca and the Financial District, is also easy to reach by subway, bus or taxi. The subway station is two blocks away, and bus stops are nearby as well.

Back story: This 22-floor high rise was built from scratch for a reported $90 million. The hotel opened as part of the Wyndham group — and the original plan called for a conventional Wyndham hotel. But during its two years on the drawing board, Fashion 26 evolved, right down to the name, which put fashion – and all the boutique hotel originality that implies — before Wyndham. “As we got into the development process we realized we wanted something a little more unique,” Wyndham president Jeff Wagoner told an interviewer a while back.

But Fashion 26 is no longer part of Wyndham. Some time during the summer of 2010 the hotel and the large hotel group parted ways, and Fashion 26 became independent, managed by Highgate Hospitality. Independence ended on February 15, 2010 when the hotel came under the Hilton umbrella and changed its name. The changes mean the hotel now affords itself of Hilton’s formidable reservations system. And guests receive Hilton points for their stay.

Keep in mind: Despite multiple elevators, going up or down can be slow in the evening when an elevator is dedicated to ferrying guests to the rooftop bar. 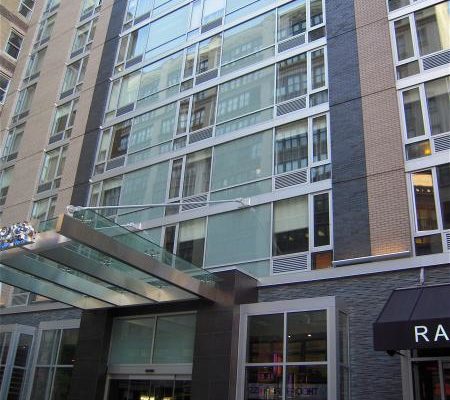 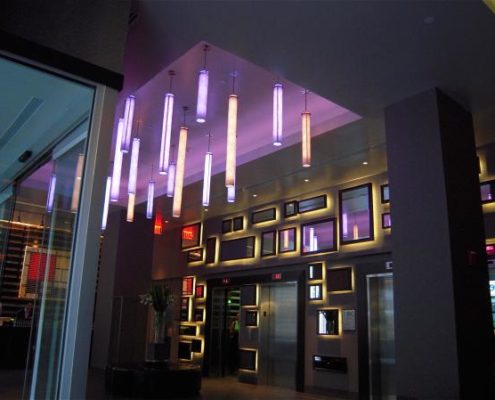 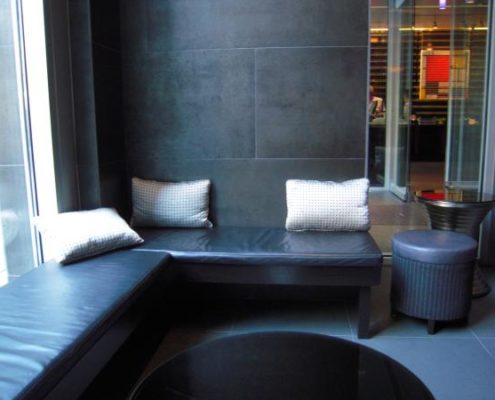 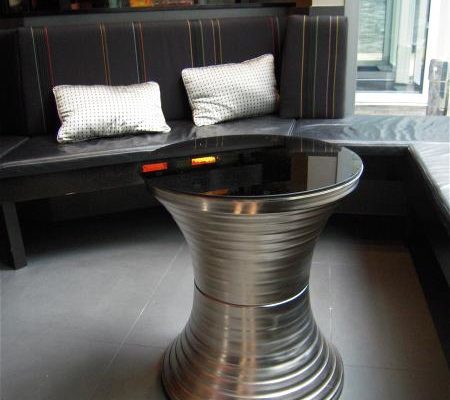 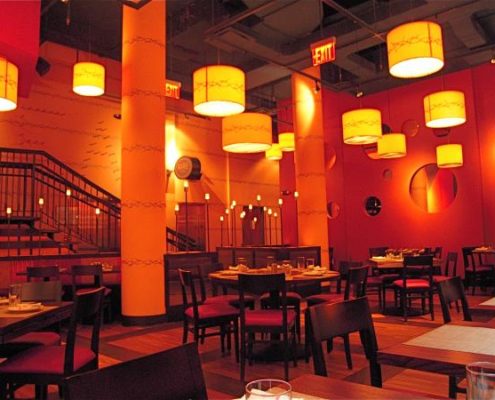 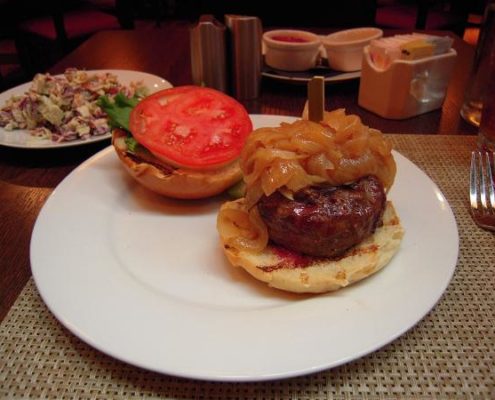 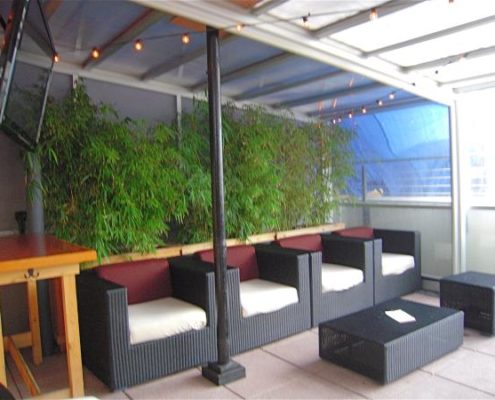 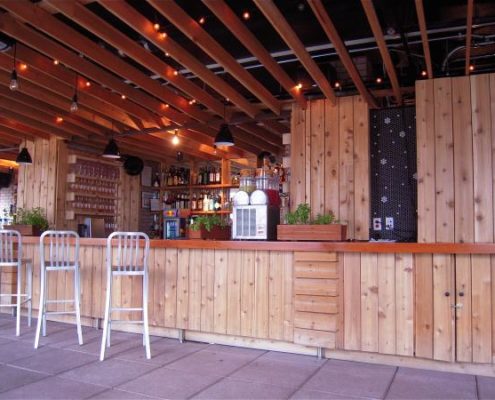 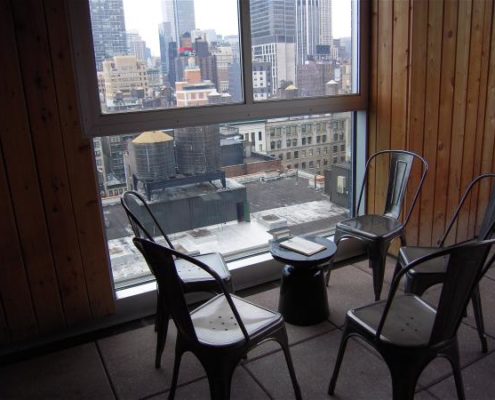 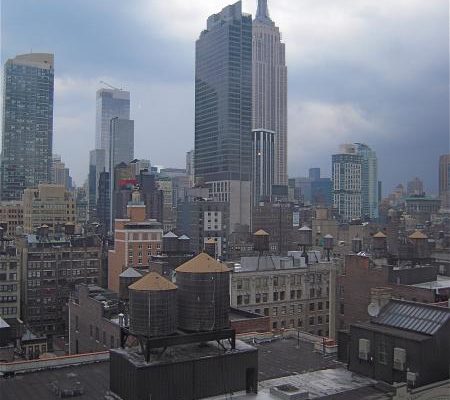 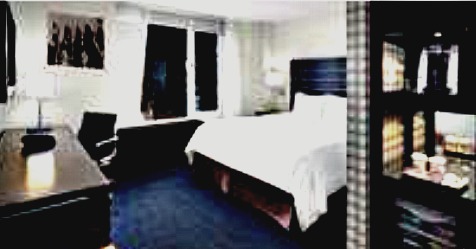