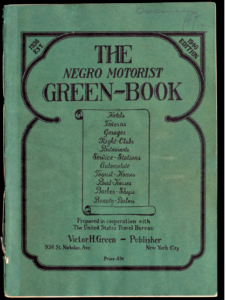 From 1936 to 1965, the The Negro Motorist Green Book, later The Traveler’s Green Book, provided a no-frills listing of restaurants, hotels and services like garages, beauty parlors and barber shops throughout North America where black travelers knew they would be welcome and safe.

A precursor of crowd sourcing, Green asked readers to share recommendations. As he wrote on the 1937 introduction page: “There are thousands of places that the public doesn’t know about and that aren’t listed. Perhaps you know of some?” 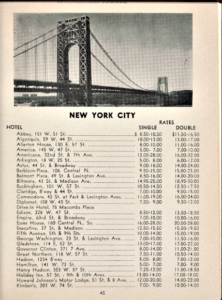 Which New York City hotels were included in the Green Book?  The New York Public Library’s digital collection features editions from a number years. In the 1937 edition, just 12 hotels were listed in New York City. None appear to be in business today.

But in the 1963-64 edition, there were 93 hotels listed in Manhattan, seven in the Bronx, eight in Brooklyn, 22 in Queens and one on Staten Island, a reflection of the Civil Rights movement and the postwar growth in the number of the city’s hotels. Many no longer exist, like the Mayflower at 15 Central Park West (now a Robert A.M. Stern megabuck condo) and Harlem’s fabled Hotel Theresa, now a satellite campus for Columbia University’s Teachers College, among other things.