The uniformed attendants posted behind a discrete desk in the grand black-and-white lobby were impeccably polite.  But check-in wasn’t unspooling quite as I expected. The man next to me, owner of a blue blazer and a belligerent British accent, waved a sheet of paper and demanded to know what the devil these bloody charges were. 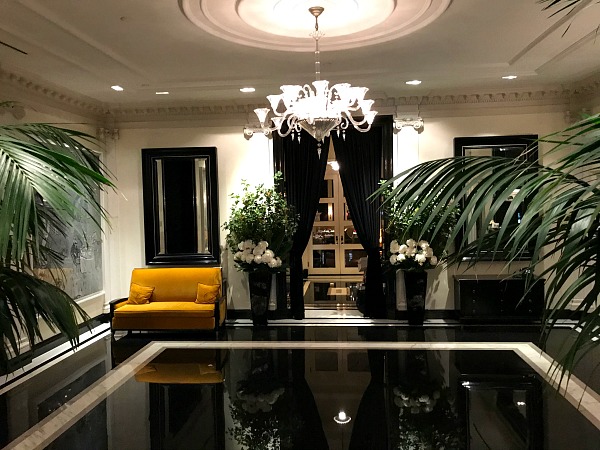 I, meanwhile, stood and waited – and waited – and waited. I’d supplied a credit card, cell phone number and e-mail address. I’d learned in detail about the hotel’s various services – yes, I’d be sure to have a drink in Bemelmans Bar, and the spa sounded divine. But I still didn’t have my key.

At last the truth emerged – my room wasn’t ready, even though it was nearly 5 pm.  (Ahem.)

But before I could ask if a different room was available – a complimentary upgrade perhaps? — the attendant spoke softly into a telephone, apologized for the delay and handed me a key – heavy metal instead of a plastic card. “You have a beautiful room,” she said. “Have a lovely stay.”

It was as if she lifted a velvet rope. I was in, and the serene, silky world that is The Carlyle – a heady mix of time-warp glamour, East Side hauteur and contemporary creature comforts – unfolded.  To my left stood a table laden with lemon water and a fleet of glasses capped with white paper lids. To the rear, the elevators, each manned – yes, manned – by a liveried attendant wearing white gloves. And was that man striding past the lobby’s Legers sporting a hotel bathrobe?  He was and nipped into the elevator, an escapee from the spa. 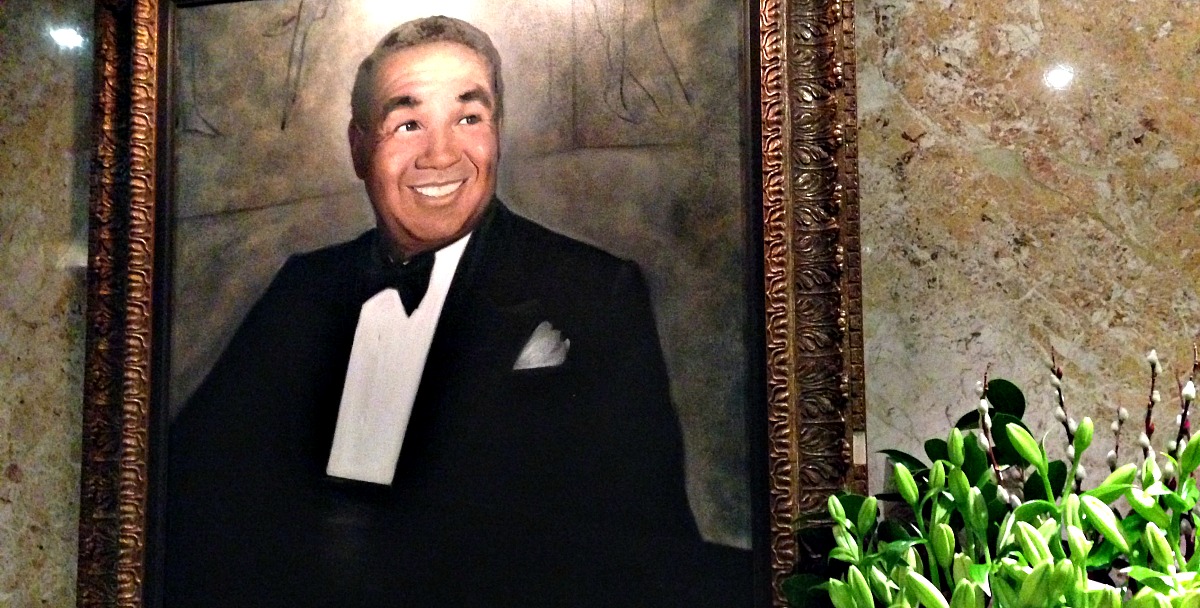 With its 35-story terracotta tower and classic black and gold awning, the Carlyle looks every inch a grand hotel. But it feels like a club, a more stylish branch of the University or Metropolitan or even the NYAC.  Rooms are called apartments, and guests often check in for weeks. Bemelmans Bar and the Gallery, where afternoon tea is served, are like canteens with regulars culled from the neighborhood, the art world and literary circles. Over tea (excellent Lapsang Soochang and generous crust-free sandwiches), I watched as a wraithlike socialite at the next table presented her teen-age daughter, an aspiring writer, to an editor at a prominent magazine. (“Do you have any clips? Oh, don’t worry about it.”)

Like many octogenarians, the Carlyle has occasional less-than-sure-footed moments. But for the most part, this sleek, timeless, brazenly unhip establishment is a nimble time traveler. Spend the night, and you can imagine yourself hobnobbing in an idealized New York – a Fred and Ginger movie (with updated plumbing) or a Woody Allen film (without the angst), soundtrack by Bobby Short. You can also climb into a fiendishly comfortable bed, nibble a turndown chocolate and curl up with premium cable.

The hotel, named for the Victorian essayist Thomas Carlyle, comes by its retro glamour naturally. Though this Art Deco concoction opened in 1930, an inauspicious year for new ventures, composer Richard Rodgers was the first tenant.  Dorothy Draper did the interiors. And because an early owner collected art, original Audubon and Piranesi prints bedeck the rooms (a handsome Piranesi hung over my bed). 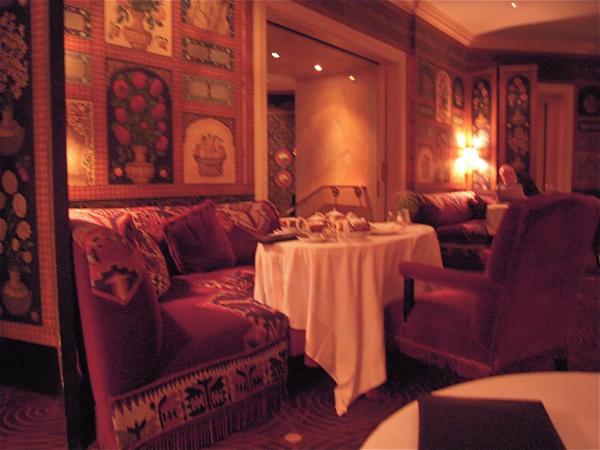 Tea at the Carlyle

With its Upper East Side locale twenty blocks north of Midtown, the Carlyle was a neighborhood perch, more so than contemporaries like the Pierre and Waldorf Towers. At one time social references were required to obtain an apartment.

It’s still discreet, attracting an intriguing crowd. I saw Warren Beatty and Annette Bening in the lobby a while back. French President Nicholas Sarkozy and Carla Bruni visited last month for the UN General Assembly. And given the military-suited guard positioned outside Bemelmans Bar the evening of my stay, his barrel chest plastered with metals, at least one international bigwig was on the premises. I wouldn’t know. The bar, garnished with Ludwig Bemelmans’ impish murals, was so moodily dark I could barely see my Vesper (at $20, pricey but potent) and a generous helping of mixed nuts in a silver server. Fortunately, pianist Chris Gillespie’s jazzy renderings of “Somewhere Over the Rainbow” and other standards came in sweet and clear.

My sixth-floor room facing Madison Avenue – too low, alas, for a Central Park view – was a primer in Carlyle-style luxury:  understated (hardwood floor, large area rug), comfortable with antiques and blithely unconcerned with trends. The most lavish stroke was its size. It sprawled, sufficiently large to make the king-size bed — the brocade bedspread folded at the foot during the day was stashed at night — seem an accoutrement rather than a centerpiece. 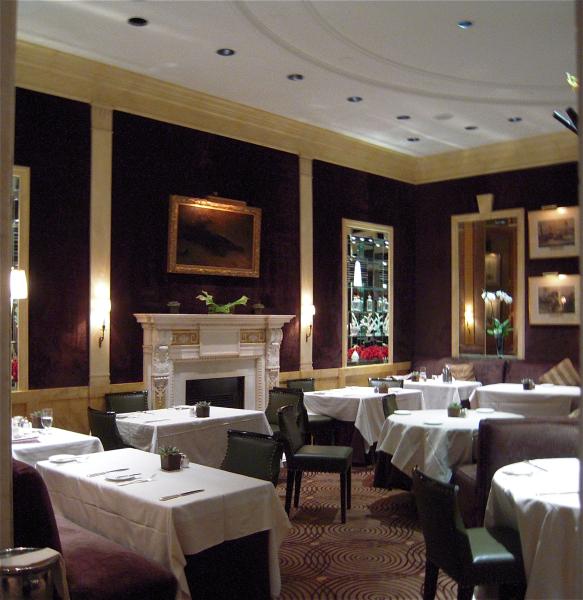 One odd note was the headboard fashioned from cream-colored woven fabric. It was spotless, but I wondered how long it would stay that way.

What looked like a full-length mirror in a corner turned out to be the inside of the bathroom door, left open and outfitted with a hook for two Frette bathrobes. The mirror’s import was immediately clear. The bathroom was so small the scale was tucked inside the vanity, along with the hairdryer. 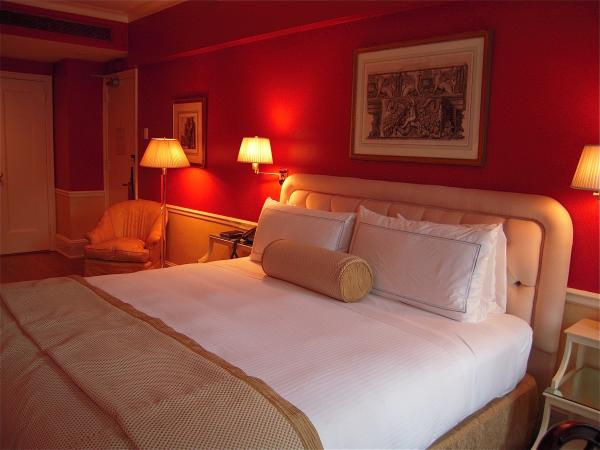 The teeny bathroom was, in fact, a hall of mirrors, though was it necessary to plant a one directly opposite the toilet? Creamy marble blanketed the few non-reflective surfaces, like the wall backing the large, glassed in tub/Jacuzzi/shower combo (excellent shower, btw). And I loved the fresh orchids on a glass shelf, along with a generous selection of Kiehls bath products.

The walk-in closet, in contrast, was gargantuan, big enough to hold a mountain of steamer trunks or the spoils of a shopping spree and thoughtfully outfitted with a pair of tray tables for breakfast in bed and a minibar, stocked with assorted glasses, nibbles and libations. A modest refrigerator displayed soft drinks and champagne.  Minibars are like casinos – the house always wins. But it was late, and when I saw a classic bottled Coke – no crass cans! – I couldn’t resist, even at $7 (plus tax).

My Coke a-fizz in a sleek old-fashioned glass, I climbed into bed. The mattress was bliss, the Yves Delorme sheets crisply soft, the down comforter just right. The Carlyle gets a lot just right, I thought as I drifted off to sleep.

Composer and Cabaret Artist Jimmy Roberts Performs at the Keyboard in Afterglow Series
Michelin and Zagat’s Serve Up Their Best NYC Hotel Restaurants for 2012
Hotel Cabaret — Complete With a Pianist — Makes a Comeback at The Carlton M Salon
Need a Last-Minute Holiday Gift? These NYC Hotel Shops Want to Help
The Quin – Short for Quintessential — Makes a Glamorous Manhattan Debut
Grace Kelly Slept Here: The Barbizon Hotel for Women Flirts With Landmark Status 30 Years After Its Demise
2 replies

What Does the 2010 Michelin Guide Think of NYC Hotel Restaurants? Now Playing at the Crosby Street: A Hip Sunday Night Film Club at a SoHo Ho...
Scroll to top