Election night 2016 was full of surprises, but not from the standpoint of anyone familiar with New York City hotels. Donald Trump’s post-election festivities unfurled in a ballroom of the New York Hilton Midtown, a go-to venue for big-ticket political events  (the 53-year-old hotel boasts that it’s hosted every U.S. president since JFK). 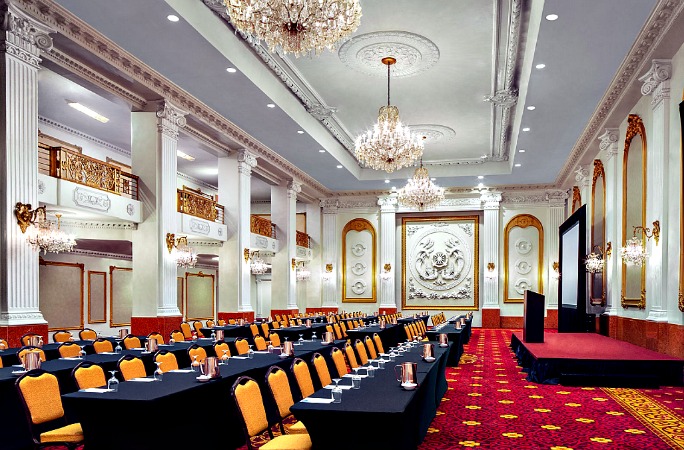 The New Yorker Grand Ballroom (imagine it without the tables and chairs).

And while Hillary Clinton chose the cavernous Jacob Javits Convention Center for her election night headquarters, we don’t know of any New York hotels with sprawling glass ceilings. (Clinton watched the election results from a suite at the plush Peninsula Hotel, which happens to be situated across the street from Trump Tower on Fifth Avenue, coincidentally or not.)

But Tuesday was another day. And in a surprising move, the Clinton campaign selected the 6,000-square-foot Grand Ballroom at The New Yorker hotel as the setting for their candidate’s eloquent concession speech.

As befits a hotel built in 1930, the freshly refurbished ballroom is stately and elegant, lighted by crystal chandeliers and warmed by a red carpet. The handsome balcony, fronted by gilded grillwork, allowed the campaign to squeeze in additional guests. The staging area was sufficiently ample to showcase a backdrop of a dozen American flags.

Still, at first glance The New Yorker is not an obvious choice for an event this momentous. It’s location across the street from Madison Square Garden is central but not as plush as the midtown locales of the Hilton and the Sheraton New York Times Square, where Clinton held her election night soiree in April after winning the New York primary. And with rooms starting at $119 a night, The New Yorker is a notch below the others.

Why The New Yorker? A call to the Sheraton revealed that the hotel ballroom and adjoining spaces were booked today by two different events, including one hosted by Morgan Stanley. As this morning’s event was unexpected, our guess is the Clinton campaign had to act fast, and The New Yorker was available.

And Clinton has a history with the hotel. The enormous ballroom served as her campaign headquarters for Super Tuesday on February 5, 2008.

That’s just a hint of the history encased within the hotel’s sturdy brick walls. At 43 stories, The New Yorker was the biggest hotel in town when it opened, boasting 92 telephone operators, a 150-person laundry service and a barber shop with 42 chairs. The clientele was equally impressive. Big Bands from the ‘30s, ‘40s and ‘50s played here, Joan Crawford, Spencer Tracy and Fidel Castro stayed here, and inventor Nikola Tesla (1856-1943), known for his work with the alternating current and the induction motor, spent the last ten years of his life in Suite 3327 (he insisted on living in a hotel room with a number divisible by 3).

The hotel declined during the 1960s and closed in 1972. Three years later the Rev. Sun Myung Moon’s Unification Church – remember the Moonies? – acquired the building. The property became a hotel again in 1994, and things perked up in 2009 with a multi-million dollar renovation that installed individual climate systems in every room and spruced up the property top to toe. In 2014 Wyndham Hotels took over and embarked on a five-year, multi-million-dollar renovation designed to recreate a semblance of the hotel’s glory days.

And that, perhaps, brings us full circle. Having weathered tough times, The New Yorker is still standing proud. Not an inappropriate backdrop for a resilient, hard-fighting candidate delivering a difficult speech with impeccable grace.