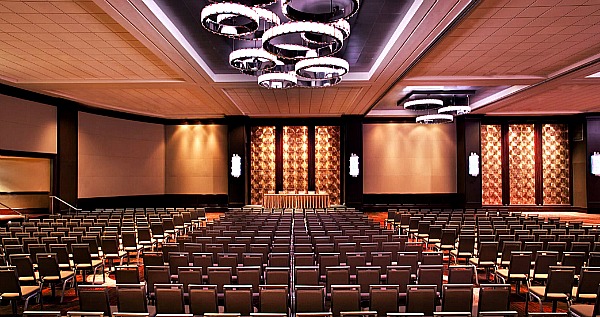 When the New York Democratic Convention kicks off tonight at the Sheraton New York Times Square, it will be more than a political event. It marks the return of the high-profile party convention to a New York City hotel, the first since the pandemic sidelined large gatherings in March 2020.

The return to normalcy in its latest iteration is great news for the 1,750-room Sheraton, the city’s third largest hotel. In addition to hosting 500 guests for the two-day event — many no doubt spending a night or two — the hotel gets to show off their 15,000-square-foot Metropolitan Ballroom, where former NY Senator Hillary Clinton will introduce NY Governor Kathy Hochul tonight.

The convention is precisely the type of event the Sheraton had in mind when the hotel sunk $180 million into renovating their massive ballroom and with guest rooms and other amenities in 2013. Among the upgrades big money and smart planning could buy were good looks (the room’s coppery backdrop is light, energetic and contemporary), green trappings (the chandeliers use LEDs to light up with whatever color the candidate wants) and high-tech everything.

New York’s hotel industry is still struggling with lower-than-normal room occupancy rates and revenues-per-room, issues that will likely be exacerbated with the planned arrival of 48 new hotels in 2022 — an addition to the market of a colossal 6,500 new rooms. That makes a convention — even a two-day one — a mid-winter bright spot.

Hotel Obits, Part II: Six Notable NYC Hotels Closed Permanently By The Pand... Where Did The Queen Spend The Night When She Visited New York?
Scroll to top