I can’t say I’ve ever been tempted to sleep outdoors in New York City. Remember the scene in Rear Window where the couple snoozing on the fire escape gets doused in a downpour?

But it turns out once upon a time people camped out in the city by choice. Kent Johnson, owner of Milktrout, a design and building consulting firm, points to the flourishing “tent cities” that sprang up along Rockaway Beach in the early 20th century, offering sea-and-sand lovers who couldn’t afford to rent a house or stay in a hotel an opportunity to wake up near the boardwalk and roller coaster. 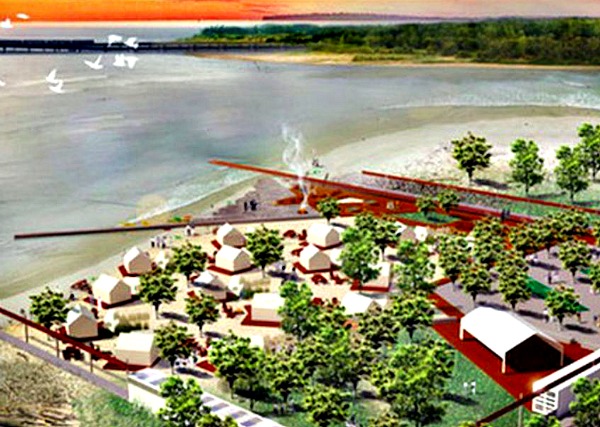 Johnson thinks city-style camping is ripe for revival, burnished with a patina of 21st-century glamping. Last week he released his Kickstarter plan for Camp Rockaway, a tent hotel community in the only part of the city where it’s legal to surf. If all goes as Johnson hopes, come Memorial Day 2015 beach-starved New Yorkers – and anyone else inclined to book a tent – can sleep not-so-rough near the shores of Jamaica Bay.

The plan envisions an area landscaped with cedar trees and beach grasses native to the area and dotted with water-proof tents designed for hunters by a Colorado company. Kids can bed down in pup tens next to the family tent. Johnson reels off the services that will elevate the Rockaway experience to the silky realms of high camp —  bathrooms with indoor and outdoor showers, queen-size beds with linens and summer-weight blankets, individual fire pits outside the tents and  breakfast.

And yes, the plans call for security and surveillance equipment. “This is still New York,” he observes.

So far, Johnson has invested in research and preliminary plans and has assembled a team. His $50,000 Kickstarter campaign will go toward building permits and the final plans, he says. He doesn’t have a precise location for the project. “But the beauty is once we find the right piece of property it’s easy to install. And the area could use an economic boost,” he says of a region hit hard by Hurricane Sandy.

Johnson has no hotel expertise,  but he’s a serial entrepreneur. His past projects include a pop-up drive-in movie theater on the Lower East Side that accommodated one car for the night and a pre-fab housing business using materials from dismantled timber-frame barns.

He cultivated a taste for history and historic preservation growing up in an 18th-century house on a Connecticut dairy farm. “I like adapting old structures for new purposes,” he says. Old ideas, too, it seems.

Five Bright Ideas to Steal from the 2014 Kips Bay Show House Renaissance Murals on the Ceiling: The Sherry-Netherland Lobby Gets a New Old...
Scroll to top