WestHouse, a new midtown boutique hotel, sports an inviting lobby, but you can’t just waltz in. At least, you’re not supposed to. 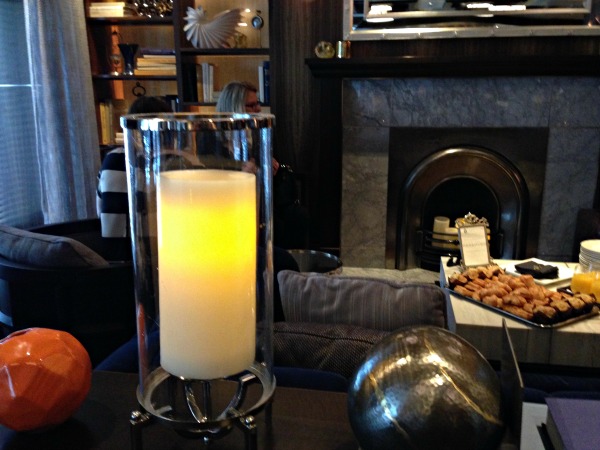 As boutique hotels have become increasingly private, WestHouse, fashioned as a concierge floor that swallowed a hotel, takes the idea to new heights. The bar tucked in the back of the Art Deco lobby is only for “hotel residents,” as guests are called. So is the roof terrace opening later this summer. And you can’t come in off the street and butter up a bagel – or anything else – from the good-looking breakfast spread of smoked salmon, artisanal breads, yoghurt and berries, even if you offer to pay.

All this is quite nice for residents, even temporary ones touring the place like me.

An Emma Gardner hand-woven rug in front of the fireplace

A spot on a high-back velvet sofa in the “den” — the part of the lobby that evokes a living room — is great for curling up with your tablet, especially when accompanied by  strong coffee in a pretty china cup (you can pour all you like all day long). And because the den is off limits to interlopers, there’s a collegial feel in the air, even if you don’t actually talk to anyone seated nearby.

The house rules were easily incorporated because WestHouse, which opened last late year, was created from scratch. The hotel was originally part of the Park Central, an ungainly 1920s pile that was hot stuff in its early years (Eleanor Roosevelt kept a suite) but had aged badly. 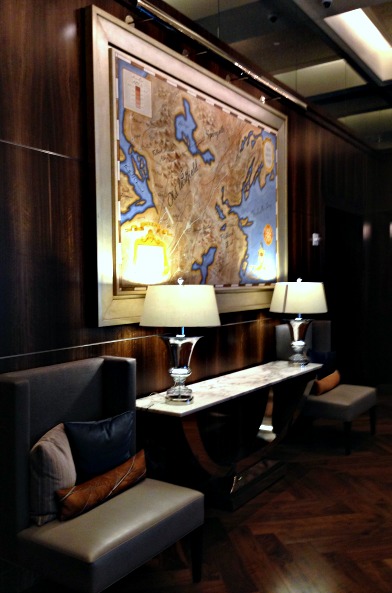 You don’t let a block-long property perched across the street from Carnegie Hall go to seed, especially one with good bones. (Check out the façade’s gracefully arched brick-lined windows.) Hence the two-prong plan. Last year the Park Central received a top-to-toe renovation that bumped it into four-star territory with a terrific, if sprawling, lounge and sleek taupe interiors designed by Jeffrey Beers International. Its western flank became WestHouse, a 187-room luxury property, also designed by Beers.

Gazing around WestHouse you sense that the decorators had a blast. The lobby is jam-packed with clever details that had to be fun to cook up. An illuminated parade of 1920s skeleton keys marches along the wall behind the check-in desk, one of many winks at the building’s origins. I loved the silk throw pillows shaped like beach balls. And look down at designer Emma Gardner’s custom hand-woven rug and a mermaid looks back up at you. 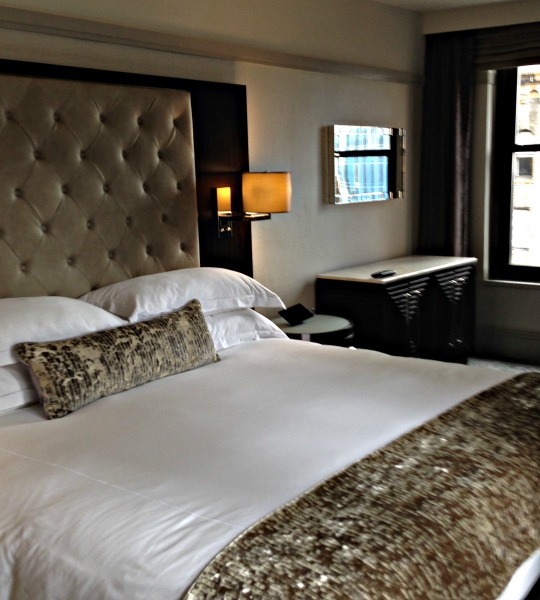 Eye-catching touches continued upstairs in the suite I saw. It felt like a Jazz Age pied a terre, albeit with 21st-century WiFi and plumbing. A foyer lined with black and white fashion photos opened onto a serene taupe sitting room with a chic sleeper sofa. A window-lined hallway, punctuated by a writing desk, led to the bedroom. And in the spacious black and white bathroom, deliciously marbled and floor-tiled with spiffy chevrons, the large stall shower’s stationary glass front boasted a small cut-out so you could reach in and test the waters. The shower also featured a heat-resistant mirror near the back that doesn’t fog up.

In a guest room

As part of the “hotel resident” manifesto guests get lots of perks, including WiFi, local phone calls, digital newspapers and magazines, overnight shoe shines and near-limitless nibbles: breakfast, afternoon tea, evening wine and cheese. All are gratis – but not entirely: there’s a nightly $30 charge per adult in addition to the room rate. Do the math and see if it works for you.

Back in the lobby I could have happily opened a book and settled into a pillowed sofa with a second coffee. But I was just passing through. For hotel enthusiasts who mentally collect lobby lounges for future visits with a coffee, a drink or tete a tete in mind, it’s too bad WestHouse isn’t an option. But for guests, it’s pretty cool.

The Best Hotels for Watching Macy’s Thanksgiving Day Parade in 2012
Stumptown or Starbucks? No Problem – They’re Next Door at the Park Central Hotel
12 replies

Renaissance Murals on the Ceiling: The Sherry-Netherland Lobby Gets a New Old... How Olivier Widmaier Picasso Turned the Sofitel New York Lobby into an Art ...
Scroll to top