If Louis Lassen, the Connecticut sandwich shop owner often credited with inventing the hamburger, had been French, the world’s most iconic sandwich might look something like a clever new creation making its debut this week at Gaby, the French brasserie at the Sofitel New York.

Meet the Franburger, a slender ground-beef patty nestled in a crisp sour dough baguette and topped with melted Brie, lettuce and sliced tomato. Lest there be any doubt about the sandwich’s allegiances, it’s served with French fries. 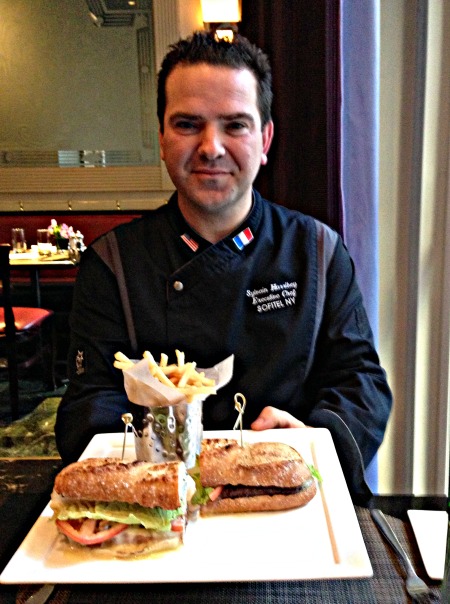 The Gallic take on the American classic is the real deal. It was dreamed up by Gaby Executive Chef Sylvain Harribey, a soft-spoken product of Bordeaux and Talence, Bordeaux’s culinary school. But after nearly 15 years in the U.S., including a nine-year-stint at Sofitel Philadelphia, Harribey knows a thing or two about American tastes (he cooks a mean Black Angus burger on a brioche bun).

His forte is invention, a skill that made him a winner on the TV show Chopped and can be seen in his stylish tweaks of brasserie standards like foie gras (cocooned in proscutto and infused with olive oil) and rack of lamb (served rare in a Dijon-mustard-spiked sauce on a bed of white beans and paired with slivers of zuccini and tomato over eggplant). The Franburger seemed a natural, as much for Harribey as for the restaurant of a French-owned hotel.

appearance (the fries come in a paper-lined silver cup). Key ingredients are imported from France — the Brie, of course, but also the baguettes, baked daily at the hotel from Parisian sour dough.

And though France has no tradition of hamburgers – “only McDonald’s,” says Harribey rolling his eyes – the Franburger looks and tastes, well, French, with a blend of textures, creamy yet crusty. And yes, it’s delicious.

Paired with a glass of red wine – Bordeaux, perhaps? – it’s an elegant take on bar food or, better yet, post-theater supper when you’re hungry but don’t want a huge meal (it’s perfect for sharing). And no, it doesn’t need ketchup — it’s French.

What NYC Hotels Do Tripadvisor Reviewers Like Best? What’s The View Like Up There? Checking Out the Tallest Hotel in North Am...
Scroll to top